US Seeking to Restore Taliban Rule in Afghanistan 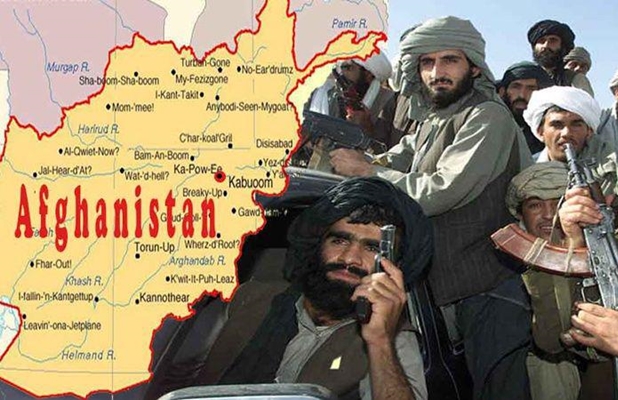 The US is seeking to restore the Taliban rule to the war-torn Afghanistan despite its earlier claims to eradicate the terror group in the region, says an op-ed of an Iranian paper.

As negotiations are underway between the Taliban and some regional and international states including Iran, reports say the Taliban and the US have reached a tentative agreement on the future of Afghanistan which will not provide the country with any benefit, reads an op-ed by Afghanistan expert Seyyed Ahmad Mousavi Moballegh published in the Khorasan daily.

The op-ed underlined that though no details have been out yet of the US-Taliban negotiations, it seems the two sides have reached an agreement on two major issues: Withdrawal of the US forces from Afghanistan and the recognition by the US of the Taliban as a ruling power in the war-torn country.

“This means that the US has violated all its earlier promises in its war on terror and eradication of Al-Qaeda and the Taliban. It also shows that the US has decided to pave the way for the collapse of all political structures in Afghanistan by handing over the country to the Taliban,” the op-ed added.

According to the paper, US President Donald Trump’s decision to pull out about seven thousand of its military forces from Afghanistan was not surprising because it seems rather a measure adopted by the US to show its good-faith in talks with the Taliban.

“With the self-confidence created by the tentative agreement with the US, the Taliban have announced that they do not recognise the current government as the legitimate government of Afghanistan. This has led President Ashraf Ghani to deeply feel the threat against his government and use whatever in his power to avoid the trap set up by the US,” Khorasan wrote.

Over the past week, Ghani appointed Asadullah Khalid and Amrollah Saleh as his new defence and interior ministers. These people used to be among his staunch critics. Meanwhile, they are well-known for their animosity with the Taliban and were sidelined over the past years from politics due to their resolute will in fight against the Taliban. Today, Afghan government and anti-Taliban politicians face a common foe and that’s why they have decided to establish cooperation in their fight against the Taliban.

“The US is seeking to control China, Iran and Russia through Afghanistan by preparing the ground for the dominance of the Taliban in Afghanistan. Such a goal can be achieved only through establishing a brutal government in Afghanistan that works in line with the US policies. However, the Taliban’s move to hold talks with other regional and international players have contributed to the speculations that the group may decide not to completely cooperate with the US after taking power,” the paper added.

The op-ed then cited a number of measures adopted by the US to dictate its will on President Ghani and prepare the ground for the Taliban’s dominance over more than half of the country’s soil.

“Entrapping First Vice President General Abdul Rashid Dostum, launching efforts to depose Atta Muhammad Nur as Balkh governor and arresting a number of security forces who were against the Taliban are among the major measures launched by the US to undermine the power of President Ghani.”

According to the op-ed, though the Taliban have taken a large swath of Afghanistan, it is not popular among the Afghans. The dominance has become possible only due to the security shortage in the country rather than the group’s courage or people’s cooperation with them.

“This means that the US’s talks with the Taliban are part of larger project to set up a new play in Afghanistan to decide for the future of the country,” the paper noted.

Ashraf Ghani has taken two major steps after being humiliated and excluded by the US from the peace talks with the Taliban. “He first resorted to the very officials who used to be his political foes, but widely known for their opposition to the Taliban. Then, he extended the hand of friendship towards the regional countries like Iran to hold talks with the Taliban with the main goal of challenging the US role in his country.”

According to the paper, over the past years, the Taliban have sought to portrait a new image of themselves in the international arenas. “It seems the Taliban have realized the sensitive situation of the regional and sat for talks with Iran. Over the past months, the Taliban held talks with other regional players like some European states, Russia and China but it goes without saying that the Taliban can’t remain indifferent to Iran as a neighboring state with its special role and power.”

As the Islamic Republic of Iran has said, Afghan government is privy to the talks underway between Iran and the Taliban. Iran added the talks are aimed at creating peace and security in the region.

The visit of a Taliban delegation to Iran can help Afghan government to play a role in any peace talks in the future. It also reveals that the Taliban does not fully trust the US and prefers to establish talks with all regional states.

“The Taliban knows it well that the US is not the only player in the Afghan politics and their presence in power hinges on establishing mutual ties with other regional states,” the op-ed concluded.

According to Iranian Foreign Ministry Spokesman Bahram Qassemi the Taliban delegation arrived in Tehran on December 30 and met with Iranian Deputy Foreign Minister Abbas Araqchi. Qassemi said the talks focused on “security issues aimed at driving the peace process in Afghanistan.” He said Kabul was informed about the meeting.