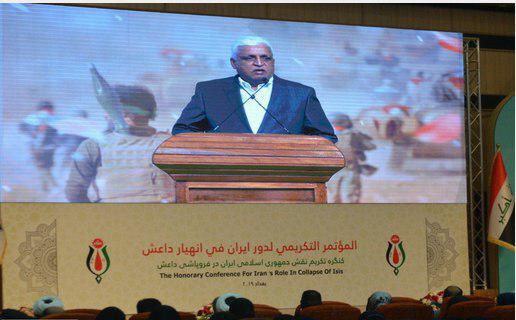 ISWNews Analysis Group: The honorary conference for Iran’s role in collapse of ISIS was held in Iraq in presence of 60 families of martyrs from Iran and Lebanese Hezbollah.

In this ceremony high officials of Iraq such as MP Falih Alfayyadh and Abu Mahdi al-Muhandis and General Mahdi Rabbani, deputy of Iran’s Defence Minister and other Iranian Generals were present.

Abu Mahdi al-Muhandis, deputy of Hashad Sha’abi, emphasized that we commanders of fight against ISIS are still alive and we do not let enemies to distort the history of war with ISIS specially Iran’s role.

Falih Alfayyadh, chief of Hashad Sha’abi also stated that Iran was our first supporter in war against ISIS.

Iraqi President sending a message to the conference thanked Iranian government and people brave stances in war against ISIS.

Hadi Al-Amiri, chief of Badr organization in the conference for Iran’s role in collapse of ISIS said: “When everyone was just watching, Islamic Republic of Iran opened its weapons warehouses to us and has a great role in supporting Iraq in war against ISIS.”