Video: IRGC Strikes Terrorist Groups on the Border Areas of Iran and the Kurdistan region of Iraq 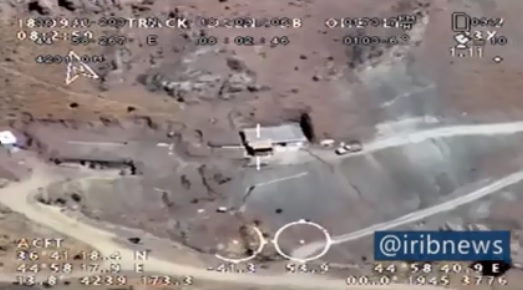 ISWNews Analysis Group: The Islamic Revolutionary Guard Corps, IRGC released images of targeting the positions of terrorist groups on the borders of Iran and the Kurdistan region of Iraq with artillery and drones.

Recently, the activities of the some Kurdish terrorist groups in the west and northwest of Iran near the Iraqi borders have increased and last week, three members of the IRGC were martyred in the Piranshahr following a terrorist attack.
Also IRGC ambushed and repelled several terrorists attempts to infiltrate Iran soil and number of terrorists were killed in this clashes.

Today, IRGC published a statement and announced the shelling of terrorist cells on the fringes of the Iraqi Kurdistan Region borders with Iran and the killing and wounding of a large number of terrorists.
IRGC said the attack was a response to recent terrorist attacks and stated that we have always warned the Kurdistan region authorities about the use of terrorist groups from the Kurdish regions of Iraq for training and organizing terrorist attacks against Iran.
The attacks were carried out accurately with complete and accurate intelligence on the positions of the terrorist groups, and civilians were asked to keep distance from military camps.