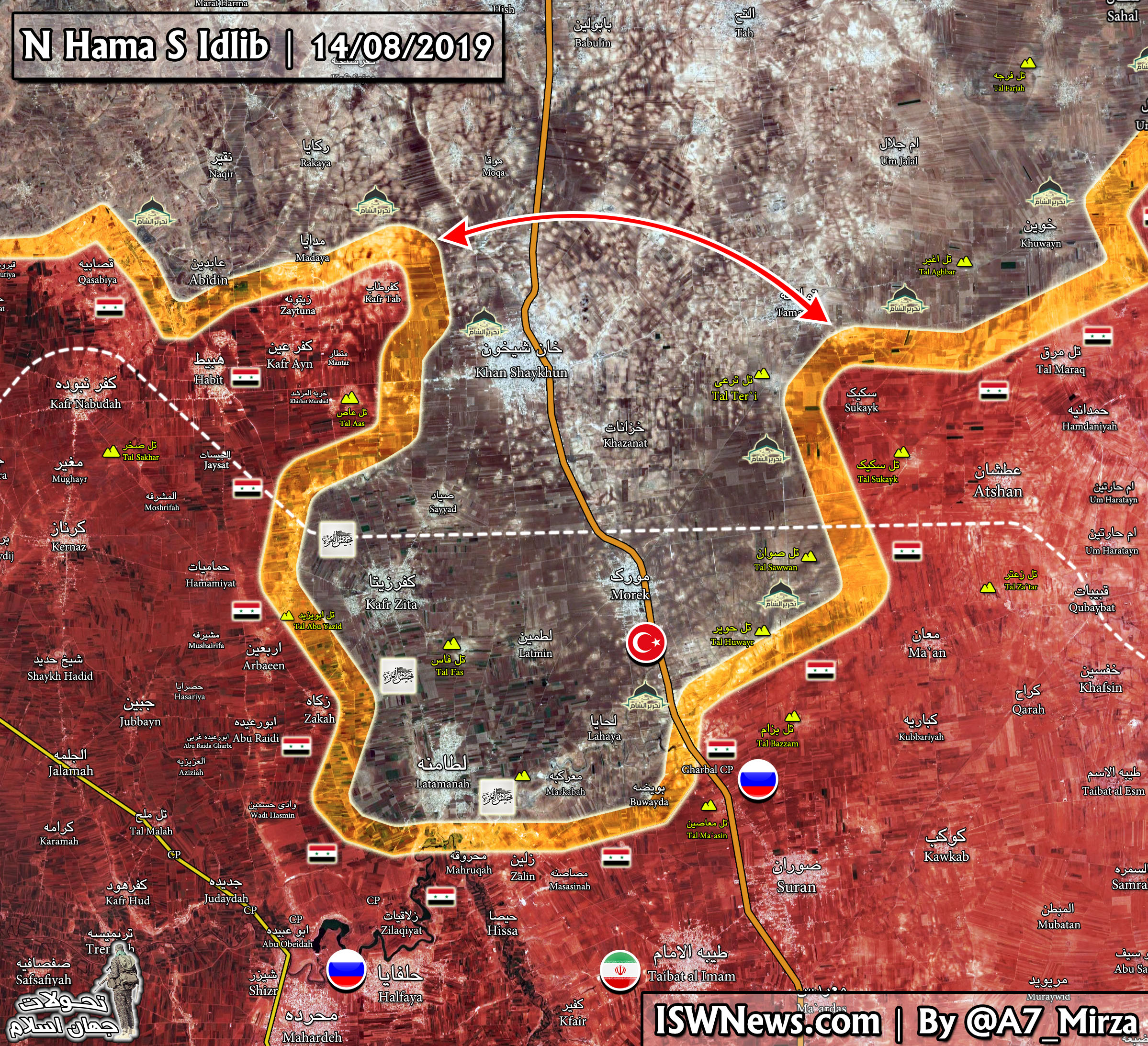 Now it’s the time to look beyond and have a wider look on the field map of southern Idlib and northwest Hama. Latest military situation on the battleground of southern Idlib province is shown in the above map. The Syrian Army, instead of having direct contacts with the militias in cities like Kafr Zita and Latamenah and Morek, decided to advance towards north and most probably to bypass the important city of Khan Shaykhun.

This bypass tactic have always worked in battles of Syria; at least it has been so for the SAA.
Of course maybe this decision was not taken from the beginning, but it was decided so after the three months ago clashes and twist and turns —Which led to liberation of Kafr Nabudah & Qalaat Al Madiq
and then after the heavy counter attacks of militias and disconnection of Muhradah-Al Suqaylabiyah road and both sides taking heavy casualties in terms of infantry and armored vehicles and finally the refusal from accepting the “Astana Agreement” and the “Ceasefire” by terrorists— have led the SAA to this conclusion that it must do it another way and finish the situation of this region once and for all.

With regards to three months ago events, the militias have taken serious and dreadful casualties in terms of death tolls and armored vehicles and are weakened in their offense and defense power and this decision —bypassing Khan Shaykhoun— of Army was taken in the best possible time.
Maybe if five months ago we’d say that “the SAA will reach to two kilometers from Khan Shaykhun” it would be considered as a joke rather than reality…

Anyway now the SAA is in position of power and managed to put the militias on the verge of one the most memorable sieges in the Syria War by activating two main fronts in east and west of Aleppo-Hama highway.
While we were writing this article, unverified news about liberation of Madaya and Abedin in west of Khan Shaykhoun were published. If the situation remains so and Russia and Turkey’s political games doesn’t come in the way of Syria Government, and if before the next month “Astana Summit” the SAA’s advances be completed we will witness a large liberation in the southern Idlib region from the militias.
A liberation which will prepare the necessary and main ground for the future operations in depth of Idlibistan.