Image: Militants Attacks Have Foiled by the Syrian Army 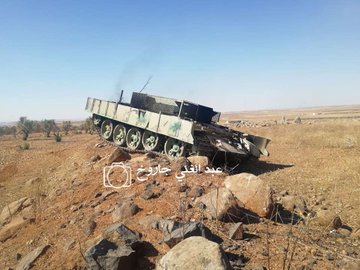 ISWNews Analysis Group: Yesterday, terrorists launched their attacks with a suicide vehicle near the village of Abu Omar, but despite the pro-militant propaganda, the attack was suppressed quickly by the Syrian army and Russian fighters.

The photos, which were released by Syrian journalist Abd al-Ghani Jarukh on August 27, show an armoured personnel carrier and one BMP-1, which were destroyed by the Syrian Army during the failed attack in Abu Dali axis.