How Barzani regime’s media ridiculed itself during the Kirkuk Crisis: the case of Rudaw and Kurdistan24 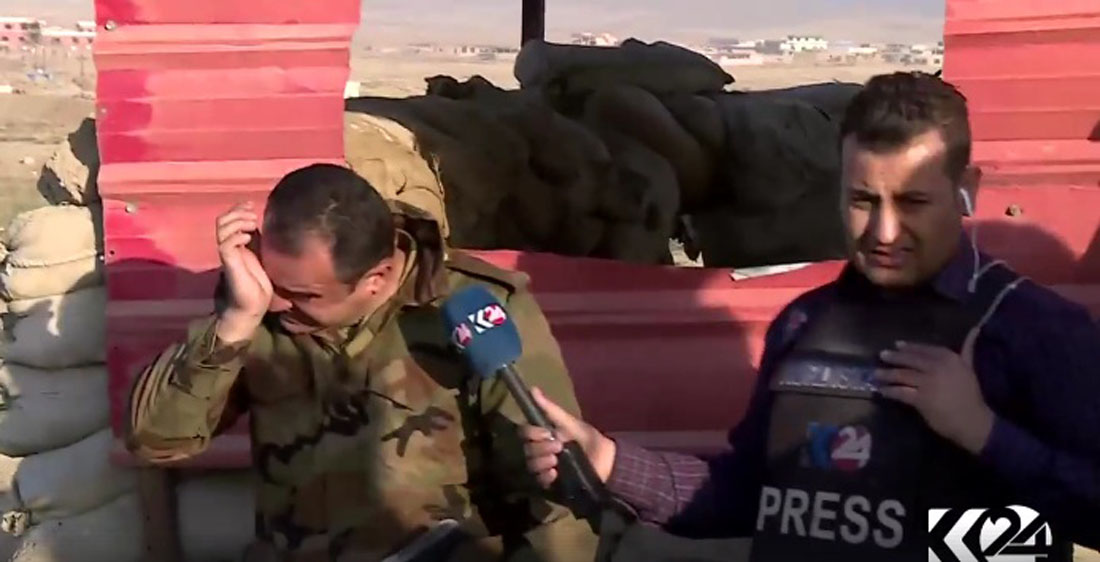 During the past one month, the World’s eyes were tremendously directed to Iraqi Kurdistan and the outcome of the independence referendum, expecting either a successful secession or a new military conflict.

The political circus received relatively wide coverage in the Western media, but many people find it easier to follow the English-language regional media whose teams of professional journalists reported from the field and published articles more frequently. Beside the well established news networks like the Qatar-based Al-Jazeera, the Saudi-owned Al-Arabiya and the Iranian Press TV, several new actors have emerged on various social media platforms, notably Rudaw and Kurdistan24. In this October, the first one has recorded more than 94,000 shares and 480,000 comments on Facebook posts, as well as over 20 million impressions on Twitter, reaching over 90 million people in total. Rudaw has over 3.2 million Facebook followers, compared to Kurdistan24 which has less than half.

The ownership background and the differences between two networks are quite astonishing. In the authoritarian countries, the national media presents one-sided view, and in totalitarian systems, all outlets are owned by the ruling party. However, in the tribal enterprise of the Barzani clan, called Iraqi Kurdistan, they have gone even further. Rudaw and Kurdistan24 therefore do not only present a single view and propagate policies that support the Kurdistan Democratic Party (KDP), but they’re also owned by the same family. Rudaw was established in 2008 for the purpose of serving interests of current Kurdish prime minister Nechirvan Barzani, and competitive Kurdistan24 (K24) was launched in 2015 by his cousin Masrour Barzani, a son of president Masoud Barzani. That’s the concept of, as Kurdophiles like to say, a Western-minded flourishing democracy and its free press.

In the mid 2000s, there was a brief period of the independent media in local languages, emerged in political chaos rather than a pluralistic environment. Information monopoly of ruling party was temporary staggered, so regional authorities quickly moved to stifle it. The first step of undermining was establishing a number of allegedly independent outlets, but de facto subservient to the regime. The second step was the severe repression of individuals and organizations. In 2008, journalist Soran Mama Hama was killed by unknown armed men, and later the same fate befell Sardasht Osman and Kawa Garmeyani. All were writing critically on the political situation and corruption in Iraqi Kurdistan. Numerous other independent reporters received death threats for reporting on corruption and discrimination. In 2011, a free satellite TV-station NRT was established, but was set on fire by armed men only three days after its official launch.

Both Rudaw and Kurdistan24 do not enjoy popularity among neighboring countries and their Kurdish groups. Rudaw has been banned in PYD-led Syrian Kurdistan for conducing a ‘smear campaign’ against them, while the Turkey’s Kurdistan Communities Union also called for the boycott and accused the media group as being founded by Turkish Intelligence Organization. Turkey itself has removed both Rudaw and Kurdistan24 from its TurkSat satellite, due to broadcasting violations during the independence referendum. Both channels are also banned in Iran, and even Baghdad issued statements threatening to revoke their television license in Iraq. Neither the US Department of State has any words of praise for Rudaw, describing it as the KDP affiliated outlet rather than objective media. On the other hand, among very few of their foreign admirers is Bernard-Henri Levy who recently spoke against proposed Baghdad’s ban and stated that “every friend of freedom in the world should support Rudaw.” His objectivity is already well known, as we’re speaking about the same person who called Israeli forces as “the most democratic army in the world.”

By analyzing coverage during the thirty days following the referendum, it’s easy to conclude that Rudaw’s and Kurdistan24’s strategic and tactical approach was almost identical. The personal rivalries between Nechirvan and Masrour were set aside, as well as various economic issues. There was not a single word about disputed oil exports (illegal over-exploitation against constitution and an OPEC agreement), the KRG’s major customers (Italy and Israel), a few months’ delay in payment of salaries, or the region’s debt which may be upwards of $20 billion. For a region with population comparable to that of Croatia, oil reserves/exports larger than those of Libya, that’s truly an amazing achievement. Still, they happily pointed out and exaggerated Iraqi debts, and all their financial hardships were attributed to Baghdad. Duo published over a thousand articles during a month, subordinating everything to the positive outcome of the referendum and desperately desired international recognition.

Their position regarding the referendum choices can be hardly described as a black-and-white dichotomy, since “no” vote option was not even considered possible. According to their reports, stances among participants could be divided only into “yes” and “not yet” categories. When it comes to specific political actors, the contrast between good and bad was more clear. On one side there’s the light forces, “One Leader, One Party, One Choice, One Country,” and on other side there are the dark forces of the inconvenient Gorran Movement, the traitorous Patriotic Union of Kurdistan (PUK), oppressive Baghdad and the regional bullies Turkey and Iran. In the hundreds of articles, there is not a single statement against separatism, either from an average citizen or some high-ranking politician. Counter-views obviously weren’t worth even of disproportionate treatment.

From heroes to victims

Rudaw’s and Kurdistan24’s coverage has reached peak absurdity during the Kirkuk Crisis, when they clumsily balanced between the narratives of heroism and victimhood. Four days prior to the start of military operation, they reported that region’s Security Council is expecting a ‘major attack’ by the Iraqi Security Forces and Popular Mobilization Forces (Hashd Al-Shaabi), and in the following days numerous reports about Kurdish heroism appeared. President Barzani told to Baghdad that referendum won’t be annulled at any price, Peshmerga also rejected all Iraqi warnings and stood prepared to face them, the Kurdish authorities were allegedly united, and thousands of volunteers took up arms. They even published bizarre videos of children and old ladies carrying rifles, claiming “they would rather die than allow occupation.” According to such reports, a decisive battle was supposed to happen, the cataclysmic conflict between the forces of good and evil, between Peshmerga as the finest soldiers ever and the cowardly Iraqi army, with Glorious Leader declaring ‘not a step back’ order, and courageous civilian support. A new Stalingrad battle.

The reality proved to be quite different. On 15 October 2017, the Iraqi military started a major operation and restored full control of Kirkuk City in just about 15 hours, with very little violence since Kurds mostly retreated without fighting. This fact passed unreported as both Rudaw and Kurdistan24 continued to report about minor skirmishes between smaller groups of disobedient soldiers, and phrase ‘fall of Kirkuk’ appeared only three days later. In the meanwhile, the desperate need for heroic scenes resulted in flooding their websites and social media by fake pictures and stories, intentionally posted to increase hatred and escalate tensions. They presented Saudi army vehicles burned in Yemen as ‘Iraqi’ equipment, killed Daesh terrorists in Fallujah as ‘Shia militia’ in Kurdistan, a controlled demolition of the bridge in Kansas as the ‘Peshmerga’s scorched-earth policy’ in Altun Kupri, etc. One rumor said that Abu Azrael, a famous Shia figher against Daesh, had been killed in fighting in northern Iraq, but the lie was refuted by himself who posted a YouTube video to show he was still alive and well. They also published unconfirmed and highly dubious data of ‘180 killed’ Iraqis, ‘400 killed’ Kurdish civilians and ‘200 missing’ in Kirkuk.

A sudden shift in the reporting strategy has rigorously transformed the Peshmerga soldiers and the Kurdish people. On Sunday night, they were ‘fearless warriors’ who never retreat, but it was already Monday morning when they became ‘betrayed and abandoned,’ blubbering incoherently for help. The bitter confession about real outcome required shame and humility, denial that true heroes never fail, and for Rudaw and Kurdistan24 that was out of the question. Instead, they found the main reason for failure in a ‘treacherous elements’ within the rival PUK party, claiming their leaders ordered a retreat, while the second reason was role of merciless foreign powers, notably Iran. During the first day of operation, Kurdistan24 showed several videos of weeping Peshmerga members who allegedly wanted to fight, but commanders ordered to pull back. The Kurdish narrative of victimhood became fashionable once again. First they managed to convince own population that there’s a total war going on, and after many fled from Kirkuk, they showed crowded roads and claimed people are escaping due to persecution.

Non-combatant Kurdish citizens also reportedly suffered ‘tremendous crimes,’ as the Kurdish language was barred from the Iraqi organized press conference in Kirkuk, and someone even put Iranian Khamenei’s photos inside governorate building. Such ‘horrors’ might remind us of Saddam’s al-Anfal campaign and the times when tens of thousands of the Kurds when gassed. It was Iran who helped Peshmerga and gave refugee to over 1.5 million Kurds, and it was the United States who supported Saddam’s regime and continued to aid it after receiving reports of chemical attacks. Still, in the perspective of Barzani ruling thugs, Iran is a major enemy, and the US should intervene in the KRG favor. Beside equalizing Iraqi prime minister Haider al-Abadi to Saddam, the Kurdish media also tried to present Iraqi Shia militias as no different than Daesh. A recently published video by Rudaw shows women with totally covered faces and smiling boys, claiming they have witnessed a beheading of a 12-year-old son and house burning. The footage shows no dead bodies, no destroyed houses, only empty stories. Perhaps Kurdish soldiers are not the bravest in the World, but Kurdish journalists definitely are. Not because they are not afraid of anything, but because they are not ashamed of anything.