Examining incidents of south of Syria; footsteps of a new intrigue! (Map Update) 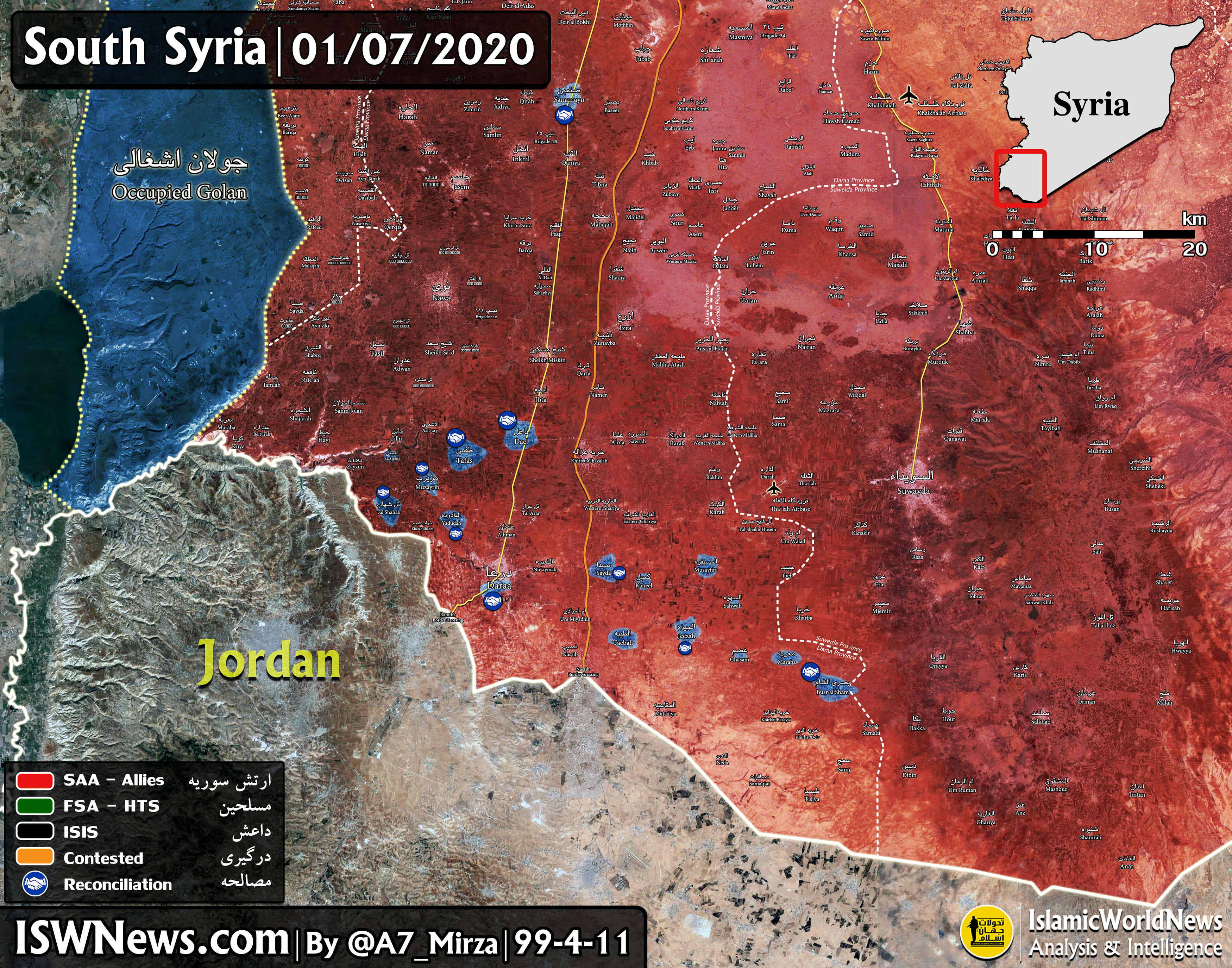 Two years after Syrian army and allies operation in south of the country and full liberation of provinces , Daraa, Suweida and Quneitra, there are some activities forming to bring the situation of south of Syria back to start of the war.

Following Syrian army advances in south of Syria and liberating vast areas and later implementing national reconciliations and cleansing southern militants, there was a rather peace until recently in May and June that tensions have increased abruptly and even resulted to casualties. In fact, the last two months had the highest casualties in the last two years.
In May 43 people including 25 Syrian soldiers and 17 5th corps forces killed which is unprecedented in the last two years. In June more than 27 of former militants (5th corps) lost their lives.

After implementing national reconciliations, some of militants moved north, some participated in cleansing process and returned to normal life and some formed a new unit under Russian supervision as 5th Corps under command of Ahmed Al-Audeh (a prominent commander of militants) and joined Syrian army.
According to national reconciliations, the protection of some checkpoints between and inside cities was assigned to 5th Corps forces, and these forces, along with other security units of the Syrian army, took responsibility for establishing security in various southern areas.

5th Corps performed its task properly and the security status in south of Syria was quite good however in recent month there are activities by groups which shows signs of a new intrigue. The intrigue which on one hand is targeting the 5th Corps and Syrian army by bombing and assassination and on the other hand stimulating discord between them.

As an example, last month a caravan of 5th Corps and Syrian army was attacked by a roadside bomb and killed nine former (reconciled) militants and one soldier or in another ambush out of Tafas town in May, seven former (reconciled) militants including two commanders were killed beside Syrian soldiers.
In addition to these activities, former militia groups in south of Syria became active and distribute statements against Syria’s administration and provoke people to stand against the government.
In important southern areas such as Busr al-Sham, Daraa al-Balad, Tafas, etc., protests and marching have increased and situation is getting closer to what it was at the beginning of the war. Protesters demand release of prisoners by the government and even killing of 5th Corps forces by militia themselves is used as a reason for protest against government

The most significant point in all the demonstrations and protests is that the protesters chanted anti-Bashar al-Assad slogans and called on the Syrian regime to withdraw Iranian forces and the resistance from the south of Syria! And they even say that the attacks against the forces of the Fifth Corps were carried out by the forces affiliated with Iran and the Syrian regime! And in all the above cases, Russia has been excluded from the circle of protests!

It should be noted that all these discords and protests against Syrian government and army by militants are done as if Russia is not an ally of Syrian government! But an ally of southern militia! This shed light on where this movement originates from.
The pro-militants media outlets are spreading these claims that the Syrian army and Resistance forces are angry with the rise of the 5th Corps, which is under Russian supervision, because Russia is recruiting more members of the ex-rebels and intends to increase its power and influence in southern Syria.

declared his intention to form a “new army in Houran” after the incident. In the mourning tent, in front of delegations of mourners for those killed in the bombing, Audeh said, “Soon, Houran will have one body and one army. This is not just for the defense of Houran, but rather it will be the most powerful tool for defending Syria.”

In addition, Ahmed Al-Audeh, current commander of 5th corps, in eulogy of martyrs of 5th corps declared his intention to form a “new army in Houran” after the incident. He said: said, “Soon, Houran will have one body and one army. This is not just for the defense of Houran, but rather it will be the most powerful tool for defending Syria.”
Those who know Al-Audeh and his background know what he means by a new army…

In general, footsteps of a treacherous endeavor to form a new proxy as a buffer between Israel and, Syrian and resistance forces can be seen.

In general, according to the explanations given above, in different layers of the field developments and scattered demonstrations in southern Syria, footsteps of a treacherous endeavor to form a new proxy as a buffer between Israel and, Syrian and resistance forces can be seen.

One probable scenario is that Israel and western coalition is trying to intrigue using their lobbies in Russia and their influence on militants of south of Syria (through Jordan) to create a buffer force between their border and Syrian army and resistance forces.
– This can be done by occupying south of Syria by different militant groups, similar to previous years that Al-Nusrah Front and other militant groups did it.
– Or by increasing the influence of Russia in south of Syria through forces close to Russia, since Russians are never threat to Israel and Israel prefers Russians close to its border than Resistance and Syrian army.
– Or even using a corps and army such as what said by Al-Audeh which is the best option for Israel.

In optimistic cases, it can be predicted that southern militants start disobeying after two years and provoke new riots and using the opportunity of the last two years from national reconciliation and Russia to defeat Syria and Russia alliance.