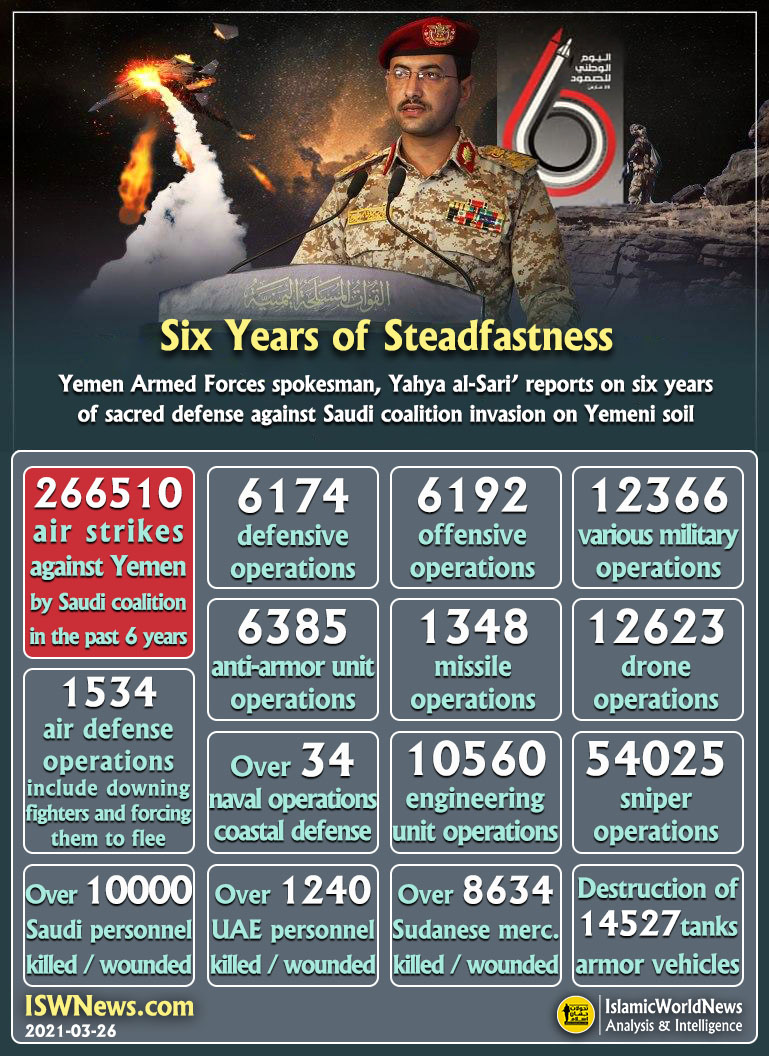 The spokesman for the Yemeni Armed Forces, Brigadier General Yahya al-Sari’, on the occasion of National Resistance Day presented the statistics of six years of fighting with the Saudi coalition.

– The total number of airstrikes carried out by the aggressor (Saudi) coalition against Yemen is more than 266510, which has been nearly a 1000 attacks since the beginning of year 2021.

– The total number of military operations of our forces against the enemies during the last 6 years has reached 12366 operations.

– More than 6192 offensive operations, including 167 operations carried out by our forces in the last two months.

– The number of defensive operations against enemy attacks is more than 6,174, of which 113 operations have been carried out in the last two months.

– The sniper unit has carried out more than 54025 shooting operations on various battlefields, of which 2502 have been carried out in the past two months, killing and wounding thousands of mercenaries, including Sudanese and the Saudi army personnel.

– The engineering unit has targeted equipment, military and armored vehicles and enemy gatherings in more than 10560 operations.

– The Air Defense has conducted more than 1,534 operations against warplanes, destroying, confronting, and forcing them to flee the battlefield.
The Air Defense Force has shot down more than 454 aircraft belonging to the aggressor (Saudi) coalition, including warplanes, helicopters and reconnaissance drones.

– The missile force, with the help of God Almighty, has carried out more than 1348 operations, during which 1348 fired ballistic missiles. Of these, 499 ballistic missiles targeted military and vital facilities belonging to the Saudi enemy and others to the Emirati enemy.

– 849 ballistic missiles target enemy gatherings, facilities, headquarters and centers and its mercenaries inside Yemen. In the past two months, the missile force has fired 54 ballistic missiles at Saudi military targets in Saudi Arabia.

– The casualties among the (Yemeni) mercenaries and traitors are more than 226615 killed and wounded.
Over the past few days, the enemy has acknowledged that in 2020 alone, 18,000 mercenaries were killed and 50,000 wounded on the Ma’rib front.

– More than 14,527 vehicles including armored vehicles, tanks, personnel carriers, bulldozers were destroyed from the beginning of the aggression, of which 9859 operations have been documented by audio and video.