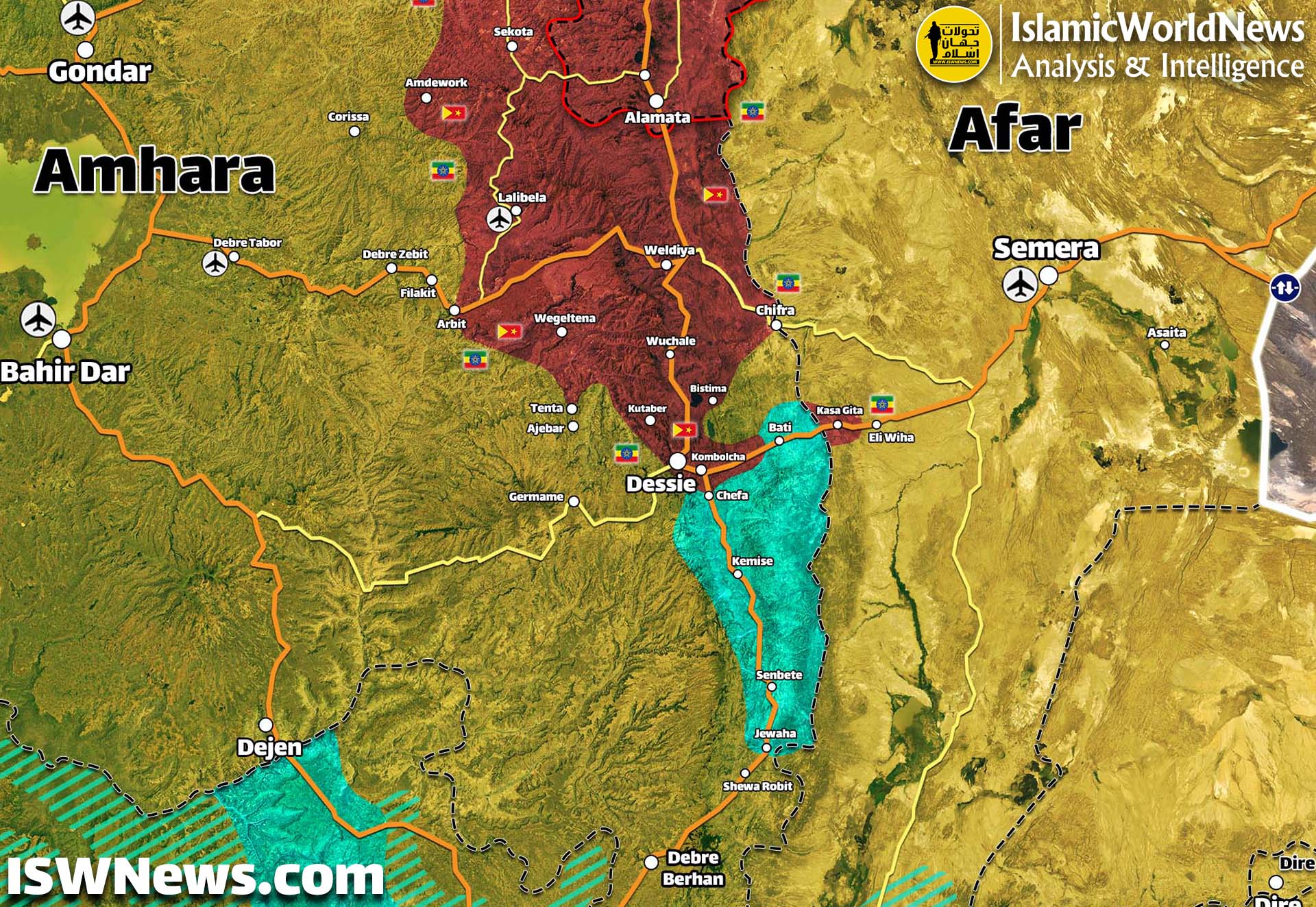 ISWNews Analysis Group: Following the recent attacks by Tigray forces on Amhara region, a number of areas including the towns of Dessie and Kombolcha, were taken out of the control of the Ethiopian federal government.

According to the latest news, the Tigray Defence Forces (TDF) have captured the towns of Dessie and Kombolcha in the Amhara region. Clashes are currently raging between militants and Ethiopian military (ENDF) in the suburbs of Kombolcha. There are also reports of Tigray forces advancing south and capturing Were Ilu.

Oromo Liberation Army (OLA) militants, on the other hand, managed to take control of the town of Kemise, 45 km south of Kombolcha, and advanced north to reach the Tigray forces. In recent statements, the Tigray and OLA militants have stated their intention to overthrow the government of Abiy Ahmed and seize the Ethiopian capital Addis Ababa.

On August 11, Kumsa Diriba, the leader of Oromo Liberation Army announced that the group had formed an alliance with the Tigray Defense Forces (TDF) and was in talks with other insurgent groups to form a “grand coalition” to overthrow Ethiopian Prime Minister, Abiy Ahmed.

Regarding the newly captured areas by the TDF and OLA militants, it is noteworthy that these towns have hosted thousands of war refugees in the Amhara region in recent months. The towns of Dessie and Kombolcha are about 255 kilometers from the Ethiopian capital Addis Ababa, and their capture by the militants poses a serious threat to the Ethiopian capital. TDF militants also entered Afar province from Chifra and Kasa Gita areas. The ultimate goal seems to be to cut off the A1 highway and weaken one of the Ethiopian government’s logistics routes. The A1 Highway is the access route from Addis Ababa to the port of Djibouti or the port of Assab and access to open water.

The latest clashes in Ethiopia began on November 3, 2020, after the Tigray Liberation Front (TPLF) attacked the Ethiopian Army headquarters in Mekele, the capital of Tigray State, and finally after a few weeks of Ethiopian military operations and the capture of a number of important areas in the Tigray region, the battles ended with the announcement of the liberation of the city of Mekele and the end of the operation by Abiy Ahmed on November 28, 2020.

But that was not the end, and the Tigray forces gradually regained their strength and regained control of many lost areas by forming a new military structure called the Tigray Defense Forces (TDF).
Tigray Defense Forces came into existence during the Tigray War in the fall of 2020 from the merger of the Special Forces of the Tigray Regional government, soldiers that have defected from the federal forces, local militia, members of Tigrayan political parties such as the TPLF, National Congress of Great Tigray, Salsay Weyane Tigray, Tigray Independence Party and others together with numerous youth who fled to the mountains.

Coinciding with the military and field developments in northern Ethiopia, several peace meetings have been held by international organizations and African countries to resolve the Tigray crisis and the Ethiopian civil war, but all efforts have been fruitless.
On the other hand, the Tigray front, which is very dissatisfied with the current situation and the unequal behavior of the Ethiopian federal government towards the Tigray people, recaptured the city of Mekele on June 28, 2021 and vowed to continue their offensive and drive into Eritrea or the Amhara Region if necessary.

Therefore, on July 6, the TDF militants launched an operation called “Operation Tigrayan Mothers” with the aim of retaking the occupied territories in the Tigray state, and then dragged the war into the state of Amhara, and tensions between Tigray and the Ethiopian government have risen more than ever.

It is noteworthy that over the past year, there have been numerous and contradictory reports of war crimes and massacres of civilians and unarmed individuals by groups involved in the Ethiopian war. According to available information, at least 10,000 civilians have been victims of war crimes and genocide, rape, looting and etc.