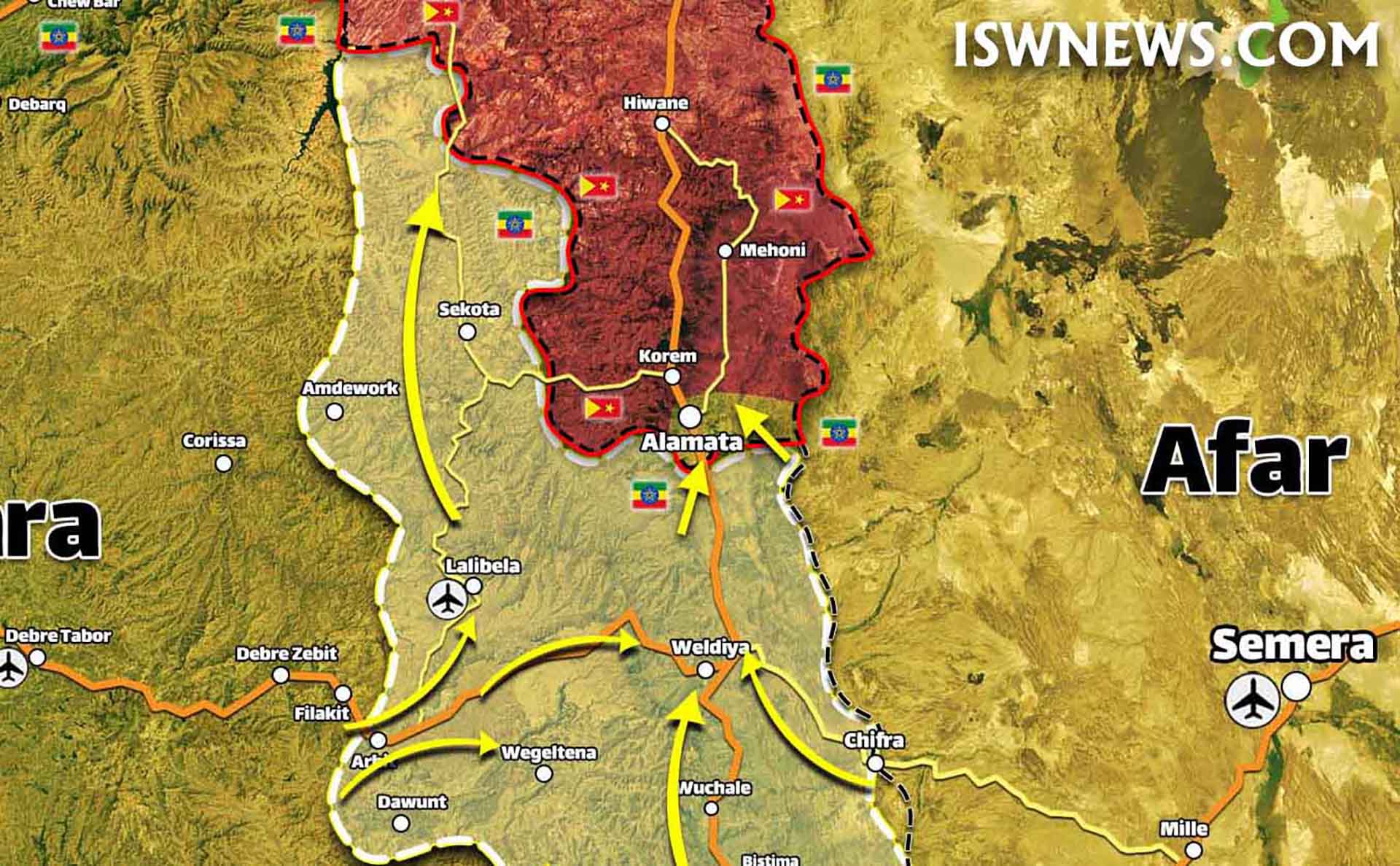 ISWNews Analysis Group: Following the advance of the Ethiopian federal forces in the southeast of Amhara State and the complete withdrawal of the Tigray forces into the state of Tigray, all areas of Amhara state came under the control of the federal government again.

In recent weeks, Tigray forces reached to the gates of Ethiopian capital, and the city of Addis Ababa was expected to fall, But Ethiopian federal forces led by Abiy Ahmed managed to retake most of the lost territory in six days from December 1 to December 7 in the southeast of Amhara State from the Tigray (TDF) and Oromo (OLA) forces, gaining the upper hand in the battlefields. After these defeats, the Tigray forces counterattacked and managed to regain control of some areas, And the clashes seemed to be tied around the towns of Weldiya and Lalibela.

But then it was the Ethiopian federal forces (ENDF) who once again managed to dictate their superiority on the field to the Tigray forces, and within 15 days from December 7 to December 22 cleared all remaining areas in the State of Amhara from the TDF and even captured the city of Alamata in the southeast of Tigray State. However, it is noteworthy that a significant part of these advances took place after the withdrawal of Tigray forces from Amhara State.

Debretsion Gebremichael, President of the Tigray Region and chairman of Tigray People’s Liberation Front (TPLF), sent a letter to the United Nations three days ago stating that he had ordered all his forces to retreat to the Tigray border. In a letter to UN Secretary-General Antonio Guterres, Debretsion Gebremichael blamed the international community for its inability to protect civilian lives, citing “drones provided by foreign powers” as one of the main reasons for its decision, and called for a ceasefire and peace talks. He stated that the Tigrayans showed that no one can rule them by force, and that the Tigray have proved their resistance and steadfastness. According to Gebremichael, there were several opportunities for peace during the war, but the other side did not use it, and he hopes that the current opportunity for peace will be used to achieve a lasting peace.

Debretsion Gebremichael’s remarks come as Ethiopian Prime Minister Abiy Ahmed, with his complete victory over the Tigray and the end of the war in the Amhara, has regained his place as the winner, and it seems unlikely that the former demands of the Tigrayans to be accepted by him. Now that the Tigrray forces have returned to their home state, there are rumors that Eritrean troops are amassing forces and equipment on the northern border, and there is a possibility of another war on the northern border. So the slightest clashes or excuse could start another long-running war in Tigray State.

An important point in the recent war in Ethiopia is the game-changing use of drones. The recent war in Ethiopia has clearly shown that the effective use of combat drones can completely change the outcome of battles. This will be crucial for countries with weaker air forces. As we have mentioned in previous articles; Abiy Ahmed had bought drones from countries such as Turkey, the UAE and Iran, and during the past month, the use of purchased drones reached its peak, and this significantly forced the Tigray forces to retreat from different areas of Amhara State.

Read more: From where does Ethiopia procure its drones?