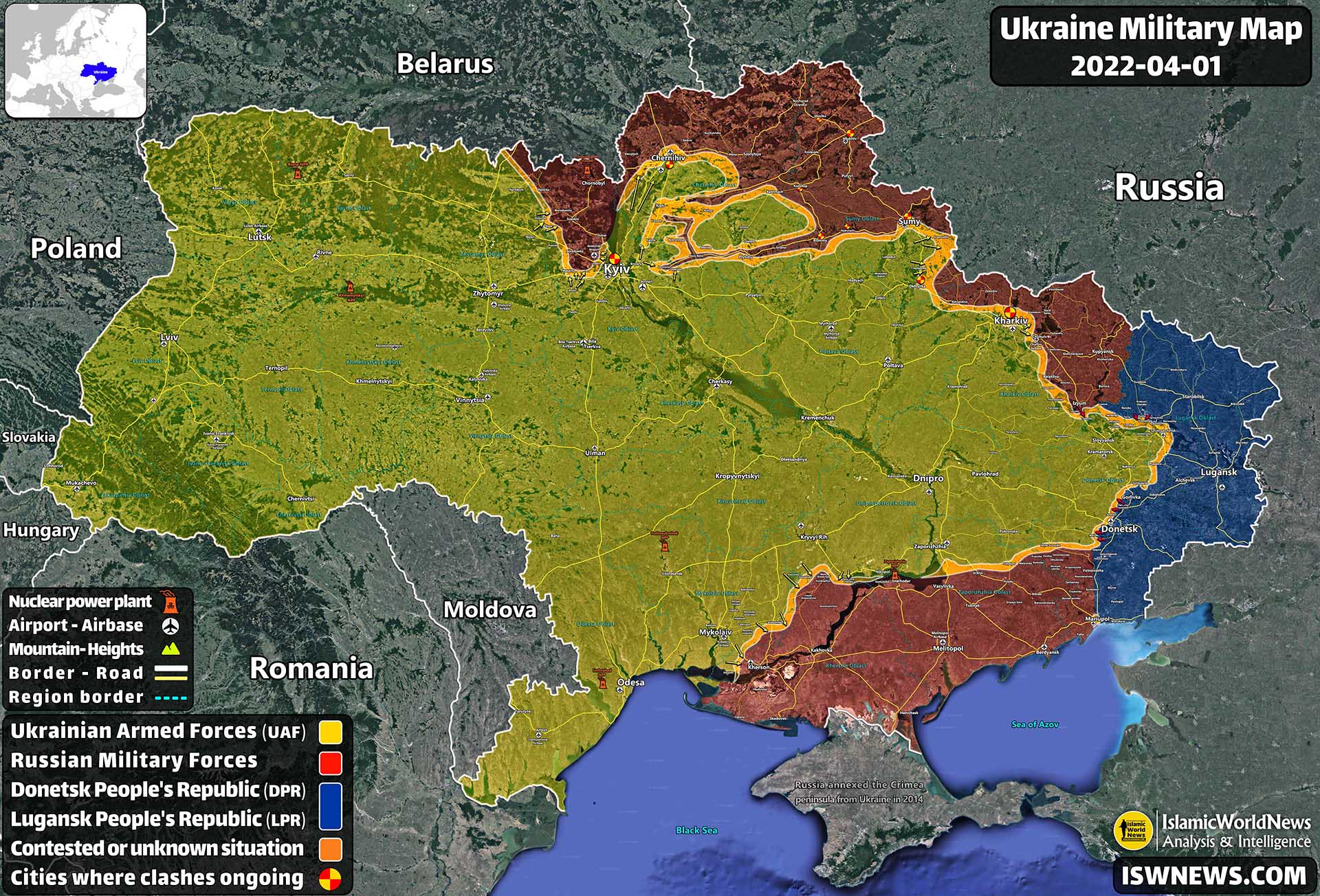 Review of the latest military changes in the north, east and south of Ukraine fronts until April 1.

Following the withdrawal of the Russian army on major axes in Kyiv, Chernihiv and other fronts, the Russian Ministry of Defense issued a statement claiming that the withdrawals made last week were in a controlled manner and in line with the goals set by the army. The Russian Defense Ministry claimed that in the past month, the main goal was to keep Ukrainian forces busy to protect important and large cities, and now with this goal achieved, the forces have withdrawn from some fronts and the second phase of operation focused on liberating the Donbass region.

On the western front, Ukrainian forces took control of the town of Trostyanets. Counterattacks by Ukrainian forces in southern Sumy also led to the withdrawal of Russian forces from some parts of the region.
In southeast of Kharkiv, UAF pushed back Russian forces from the Malaya Rohan area and cleared several kilometers of the Kharkiv-Chuguev road. The situation in Kharkiv has not changed from the last 10 days, and the city is still witnessing widespread bombing.

Clashes between Russian and Ukrainian forces continue on the Donbass region. This front is currently the most active front in Ukraine, and according to the Russian MOD, Russian troops will be more concentrated in the Donbass region in the coming days.
On the Izyum front, the Russian army is advancing towards Slovyansk, passing through the town of Izyum. The Ukrainian army is said to have opened a local dam in the area to prevent Russian forces from advancing. Progress on this axis is slow.

Clashes continue south of the town of Rubizhne on the Severodonetsk axis. Earlier, Russian troops had claimed control of the town, but images from inside the town revealed that Ukrainian troops were in the southern suburbs of Rubizhne and that the town was not fully under Russian and Luhansk control. Also in northwest of Rubizhne, Russian forces took control of Zhytlivka and Terny areas and a number of other villages.

On the Popasna front, the situation on the ground is not entirely clear, but Russian troops are present in the southern part of the town, and the town is the contact line between the Russian and Ukrainian armies. It seems that Popasna is not a priority for the Russian army at the moment.
In the Gorlivka axis and the city of Donetsk, Russian military forces have made minor progress in recent weeks. In northern Donetsk, Russian and Donetsk (DPR) troops have taken control of the village of Verkhnotoretske village and are advancing north. The purpose of advancing on this axis could be to move to the southern road of Kramatorsk and complete the siege of Severodonetsk and Kramatorsk in this area. In west of Donetsk, clashes continue in Marinka area. The Ukrainian army is resisting well in the Marinka area. Breaking the Ukrainian army’s defensive lines in the Marinka could be the key to the Russian military advancing deeper and northwest of Donetsk.

In the south, on the Kherson and Mykolaiv fronts, Ukrainian forces have carried out a series of counterattacks over the past 10 days, repelling Russian troops largely around the town of Mykolaiv. The advance of Ukrainian forces continued even near the city of Kherson, until the Russian army announced in a statement that it was repelling Ukrainian attacks near the Chornubayuka area west of Kherson. There are currently sporadic clashes on this axis between Russian and Ukrainian forces, and in the past few days there has been no significant progress on either side.