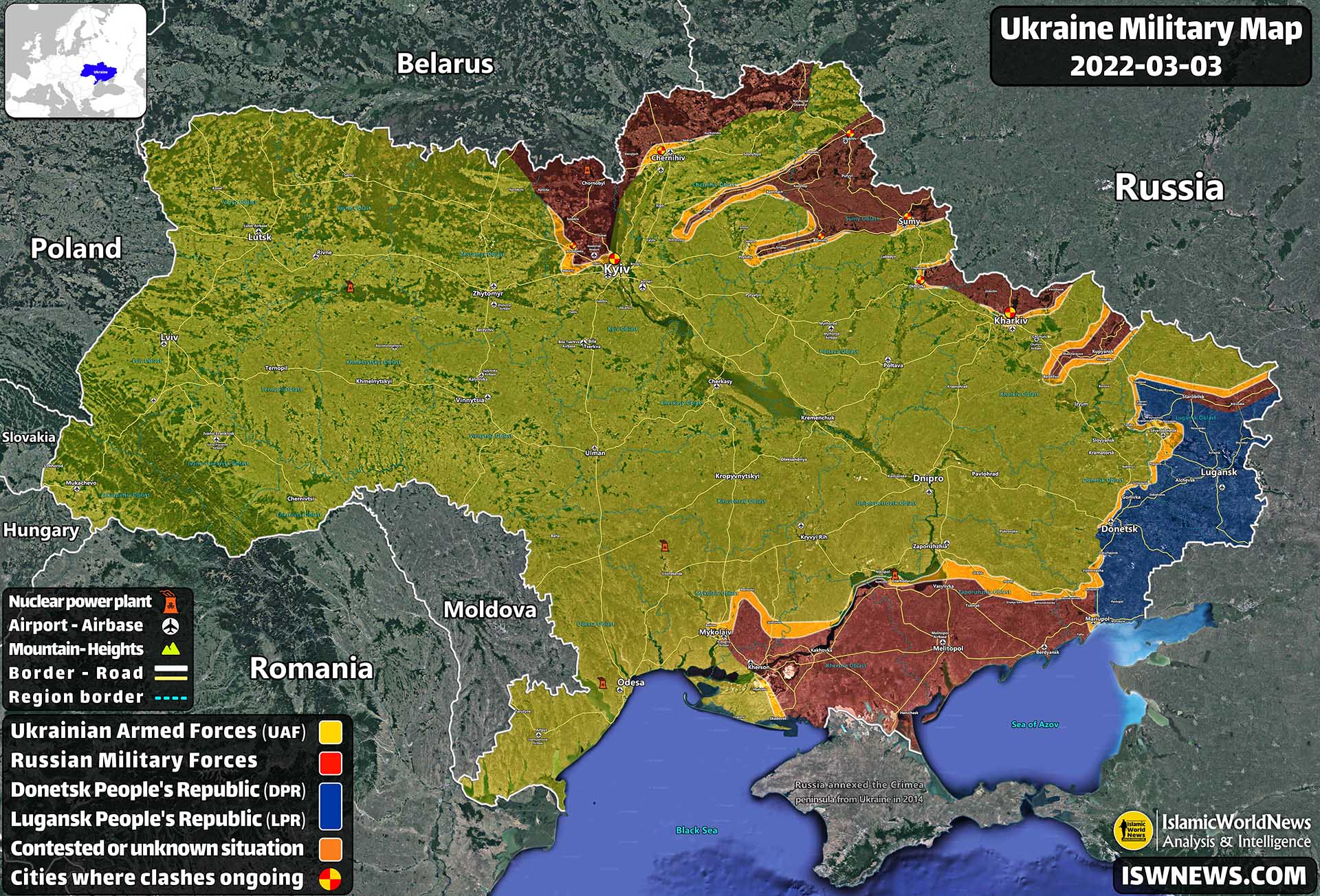 Review of the latest military changes in the north, east and south of Ukraine fronts until March 3.

Southern and Eastern front:
Heavy fighting continues at the entrances to Kharkiv between Russian and Ukrainian forces. Most of the military positions, as well as government buildings where the Ukrainian defenders are present, have been bombed by Russian warplanes and artillery. The lines of conflict in and around Kharkiv have not changed.

The town of Balakliya, south of Kharkiv, has been captured by the Russian army. The town of Balakliya is located on the Kharkiv-Donetsk road. Cutting this road by Russia will have negative impact on Ukrainian transfer of logistic on the eastern fronts of Ukraine.

On the northern axis of Luhansk, the Luhansk Forces (LPR) and the Russian army took control of a number of areas and villages in the northern part of Luhansk Oblast. With the advances made, the important city of Severodonetsk came under a quasi-siege. Progress on this axis is slow.

On the Donetsk axis, clashes continue around and inside the coastal city of Mariupol, which is not yet in full control of Russian forces.

In the province of Zaporizhzhia, the city of Vasylivka in the central part of the province was captured by Russian forces.

In Mykolaiv province, clashes continue on the outskirts of Mykolaiv, and some sources have reported the arrival of Russian armored forces in the city.

Northern front:
For the second day in a row, the military situation on the northern fronts of Ukraine remains unchanged. Scattered clashes continue between Ukrainian and Russian forces around Gostomel and in the Borodyanka area. The current situation around Kyiv seems to be stable for a certain period of time as a lever of pressure to finalize the talks, and meanwhile most of Russia’s attacks will be carried out in the form of precision missile attacks on the city’s infrastructure. Fulfillment of Russia’s demands and conditions to the Kyiv government is a key factor in determining whether or not to continue land advances in and around Kyiv.

Overall, about 70% of Kherson Oblast, 50% of Zaporizhzhia Oblast, 20% of Mykolaiv Oblast, 50% of Donetsk Oblast and 60% of Luhansk Oblast in southern Ukraine are now under the control of the Russian army and its allies.