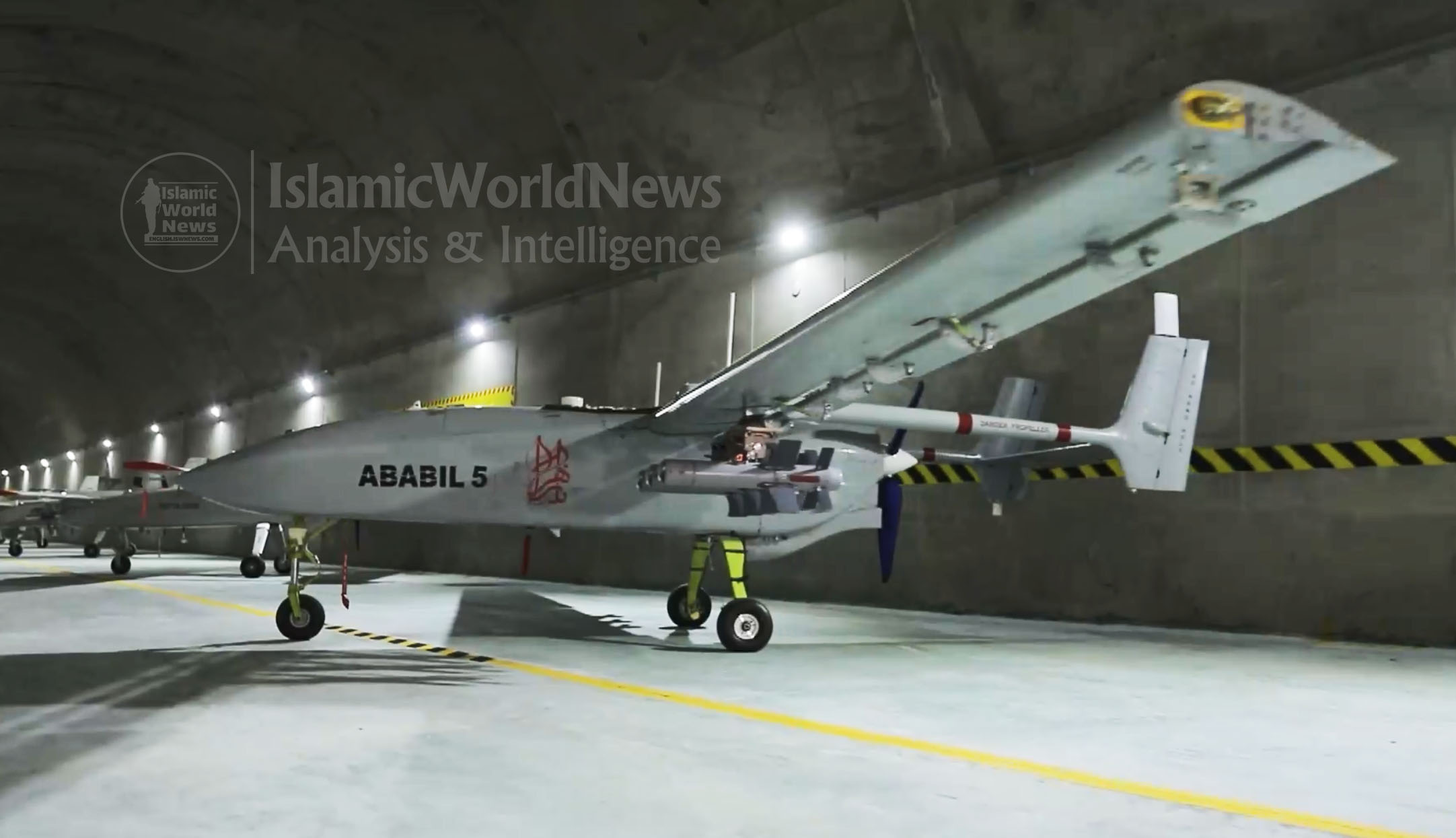 In a parade held on April 18th in Tehran, a new drone named “Ababil 5” (Ababil-V / AB-V) was unveiled. Until now, there was no official news and information about the Ababil 5 drone. This matter made this drone to be noticed by experts and media. Although the exact specifications of the Ababil-5 drone have not been officially announced, but according to the available footages, we will review the specifications and features of this drone.

In this drone, a piston engine and a propeller are used as powerplant, which means that the maximum flight height is limited to about 25,000 feet, and its cruise speed will be at the level of 150-200 km/h.

The body of this drone has sharp angles and lines, which are clearly designed to reduce the radar cross section from the front, i.e., when the bird is approaching the radar.

Another reason for using a retractable landing gear in front of the body can be related to the location of the optical cargo so that it does not obstruct its view. On the other hand, if the cargo is installed in front of the landing gear, like Mohajer-6, due to the greater distance from the center of mass of the bird, more balance weight needs to be added, which may cause problems for the drone’s performance; Therefore, the retractable landing gear has been used with the mentioned advantages.

The rear wheel landing gear is fixed type. According to the published images, the base of the rear wheels are connected to each other by a wire, which limits the amount of final bending of the landing wear during landing and prevents the body from hitting the runway surface. This type of landing gear configuration, i.e. retractable landing gear at the front and fixed gear at the rear of the UAV, is also used in the Turkish Bayraktar TB2 drone.

Based on the dimensions of the truck floor, the Ababil-5 wingspan is estimated to be about 12 meters, which is similar to the Turkish TB2 drone.

The wingspan is 20% larger than that of Mohajer-6, and with the increase in the area of the wings, the mass of the cargo has also increased, so that Ababil-5 is able to carry six Qaem-1 bombs. As a comparison, the Mohajer-6 and TB-2 drones carry up to four bombs.

In terms of weapons, Ababil 5 has been seen armed with Qaim 5 and 1 bombs and Almas missiles. Ababil 5 drone can carry six Qaem 1 bombs and four Qaem 5 bombs.

The Qaem bombs are a series of Iranian air-to-ground glide bomb and the surface-to-air missiles with SACLOS beam-riding or TV guided guidance method.
Qaem 1 bomb has an accuracy of half a meter, a range of 5 kilometers and the ability to destroy targets at night and day and in all weather conditions.
There is no detailed information about the range of Qaem 5 bomb. Some sources say its range is about 8 km.
Almas missile is also a solid fuel anti-tank top attack missile. which has a thermal seeker to detect and destroy targets with a range of 8 km when used in air-launched mode.

Considering the recruitment of Ababil 5 by the army and IRGC and its manufacturing by the Iran Ministry of Defense, in addition to the similarity of some of its components such as optics to Mohajer 6, there is a possibility that the ammunition used in Mohajer 6 can be coordinated and linked with this drone.

Carrying a larger number of bombs or cargo effectively increases the lethality of the bird, and economically, it destroys targets with fewer sorties and hunts targets at a lower cost. Also, reducing the number of flight sorties can be important both in terms of maintenance and increasing the operational rate of the fleet.

Regarding the engine, based on the matching of the image of the engine and the UAV body, the Rotax 914 engine was probably used to provide propulsion for the Ababil 5 drone. This engine has already been used on the Shahed-129 drone.