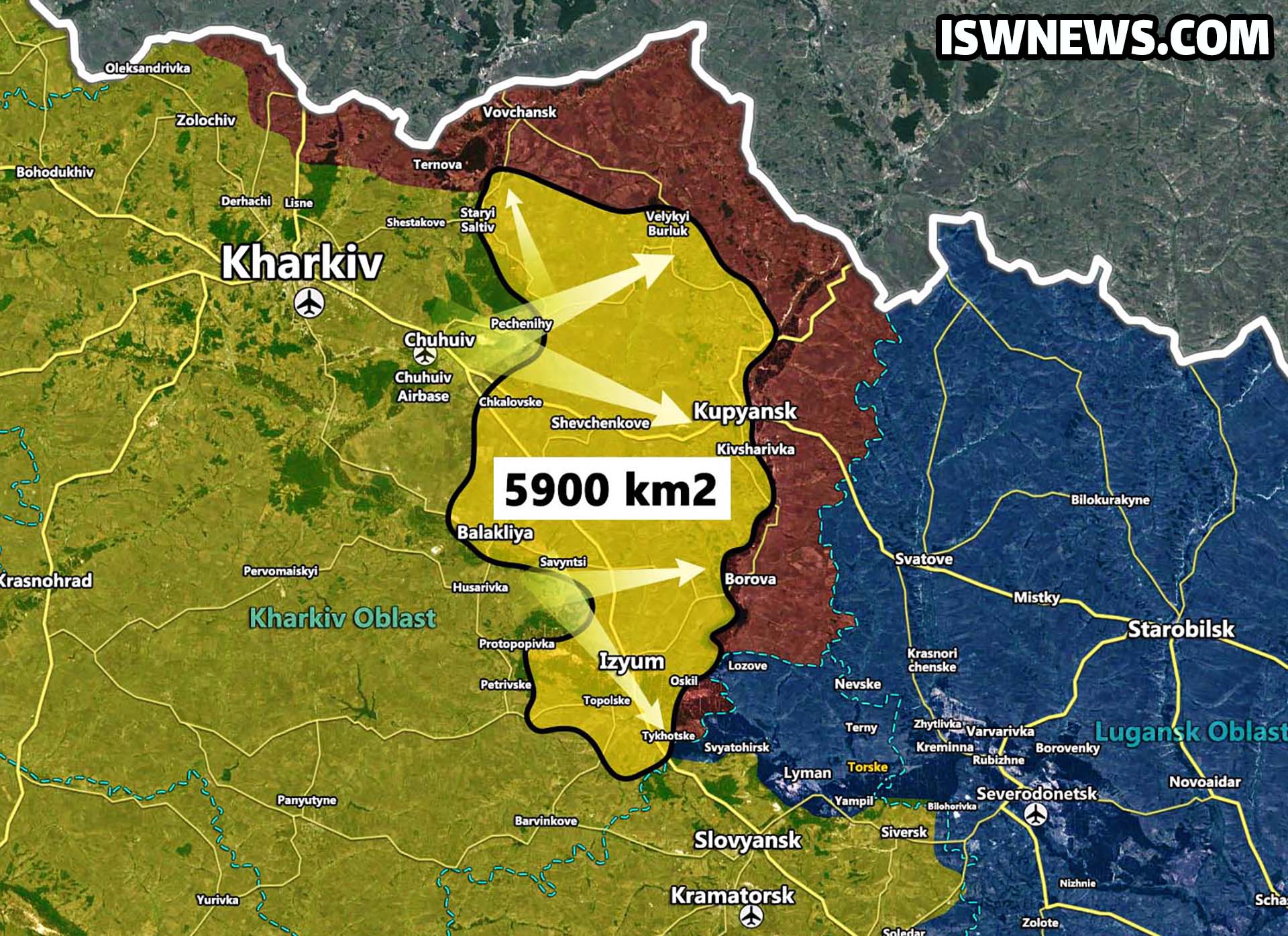 ISWNews Analysis Group: After a series of retreats by the Russian army from Kharkiv Oblast in the last week, Ukrainian forces and its allies dominated large areas of the east of this oblast with an area of approximately 5900 square kilometers.

In recent days, Russian Army and its allies withdrew from large areas of the southeast and east of Kharkiv Oblast, and after that, the Ukrainian forces entered the areas almost without any particular conflict and dominated the villages and cities one after the other. During these retreats, important towns and areas such as Balakliya, Izyum, Kupyansk and Dvorichna came under the control of the Ukrainian army. It is safe to say that these retreats are considered to be Russia’s biggest defeat and retreat in the Ukraine war after Russia’s extensive retreats from the northern regions of Ukraine and the city of Kyiv in the early months of the war.

It should be noted that in the course of these retreats, an area of nearly 5900 square kilometers has been controlled by the Ukrainian army, and according to the developments in Kharkiv Oblast, it seems that this area will be increased and the Russian army will retreat to the border lines north-east of Kharkiv. According to the latest information, an order has been issued for the evacuation of the border town of Vovchansk, and the evacuation of this town means Russia’s return to the international borders in this region. During the battles of recent months, the town of Vovchansk was used as a logistic bridge of the Russian army towards the eastern regions of Kharkiv Oblast.

By carefully looking at the field map, it can be seen that the Russians’ purpose for these retreats is to move the forces behind the Oskil River and use this river as a natural defense barrier. A similar tactic that we saw earlier using the Siverskyi Donets River in the same region and parts of Donetsk Oblast in the Lyman axis or Luhansk Oblast at some point of the battles.

But what is the reason for this and why did the Russians withdraw from these areas?

There are many different reasons for the recent defeats of the Russians in Kharkiv Oblast. In the last two months, after Russia’s success in seizing the city of Severodonetsk and advancing towards the important towns of Slavyansk and Bakhmut, we witnessed a long-term stoppage and, in other words, “stagnation” in the eastern fronts of Ukraine. In addition to this issue, on the southern fronts in Kherson and Mykolaiv Oblasts, we have practically witnessed a confusion and stoppage of the Russians.
The absence of a comprehensive operational plan by the Russian army and the lack of coordination of operations between the eastern front and the southern front and the failure to use all or most of Russia’s combat capacity in terms of manpower, logistics, ground forces and air fleet, failure to suppress the Ukrainian air force effectively, not suppressing the western military aid sent to Ukraine effectively, relying on old and outdated tactics in the war in Ukraine, etc. are among the reasons that can be clearly seen in the battles in Ukraine.

Despite the importance of the Ukraine war for Russia, in terms of logistics, the Russian army has practically used a small part of its manpower in this war, or has not used all its missile or air power in these battles. Or there are great uncertainties regarding the plan, the general picture and the ultimate goal of Russia’s operations in Ukraine; A subject that emerges in a strange way at every stage of the war. Failure to capture the entire city of Kyiv and its surrounding areas while this was possible, and then extensive retreats from the north, and then a complete focus on the eastern front and the entry of military power into this area, and again reducing or stopping operations in this axis for a period of Almost two months and the confusion between advancing or stabilizing areas in the southern front, practically shows the confusion of the Russian command. On the one hand, the Russians are looking for results, and on the other hand, they are not willing to spend more. If this war is important for Russia and the Russians want to achieve goals in this war, they must devote all or most of their combat power to this war, otherwise they will not have a chance against the Ukrainian army with high manpower; Or the goals will be achieved at a very high cost and in an unknown period of time.

On the other hand, maybe the Ukrainian forces have an easier task than the Russians, and that is to push the Russians back and take back the lost areas. A subject that does not have logistical difficulties and the difficulty of planning an attacker on several fronts. Considering the almost good logistic support of the western countries to Ukraine and the intelligence superiority of the Ukrainians and the use of human forces more than Russia in this war, only a little negligence on the part of the Russians is enough to change the tone of the war in favor of Ukraine. Ukrainian forces have shown that they are capable of resisting and inflicting heavy blows on the Russian army if they have proper support and sufficient logistics, and they have high combat power. Considering that more than six months have passed since the war, the Ukrainian forces have gradually found their combat organization and have come out of the confusion of the initial months. It seems that if the current trend of Russia does not change, in the coming weeks and months we will see more effective attacks and operations by Ukrainian forces to retake the eastern and southern regions.

News of other regions:

The military situation in Luhansk and Donetsk Oblasts has not changed significantly in the last two months, and sporadic clashes continue around Bakhmut, Soledar, North of Gorlivka, west of Donetsk in Mariinka and Pesky, and near Ugledar. In Mykolaiv and Kherson Oblasts, the clashes between the Russian and Ukrainian army forces continue in the Arkhanhelske and Sukhyi Stavok axes in the Ingulets axis. The conflicts in these areas are currently equal and neither side is able to make large advances.