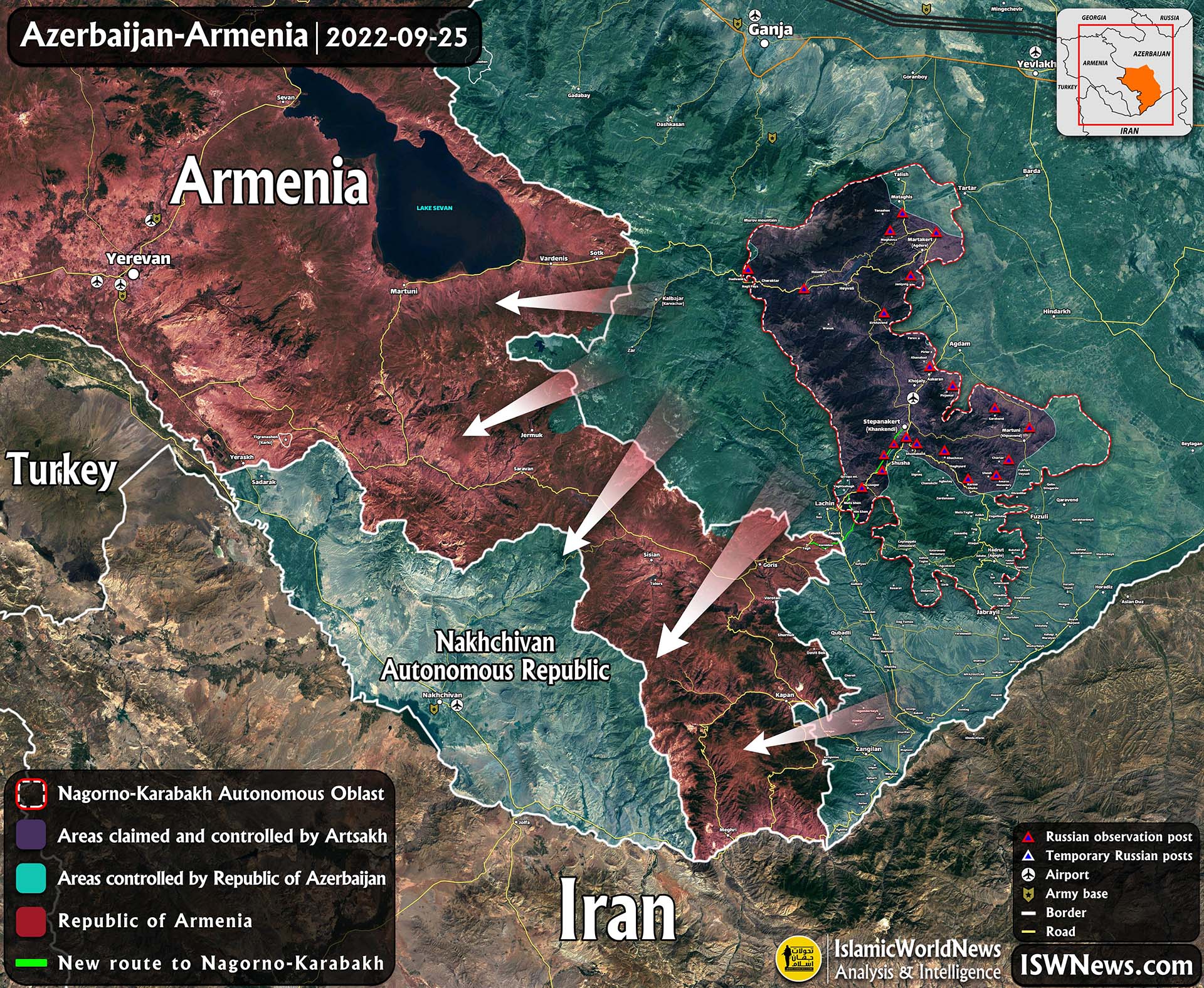 ISWNews Analysis Group: The evidence indicates that the Azerbaijan army with the help of Turkey is preparing to launch a massive military offensive against the Armenia after the anniversary of the start of the second Karabakh war.

According to the ISWNews field information from the Republic of Azerbaijan, the government and the army of this country are preparing to launch a large-scale military offensive against Armenia and occupy the areas of Syunik, Vayots Dzor and Gegharkunik provinces in the south of Armenia after September 27, i.e. after the anniversary of the start of the second Karabakh war. The main goal of Azerbaijan is to occupy the historical region of Zangezur, which now geographically corresponds to Syunik province of Armenia.

According to the received information, it is very likely that the Azerbaijani army will start its military attacks after September 27 (the end of September or the beginning of October) with the focus on occupying the Zangezur region and connecting the main territory of the Republic of Azerbaijan to the Nakhchivan region.

The deployment of S300 air defense systems in Baku and its surroundings and the increase of air defense measures are observed in this region more than before.

Also, the people who have just finished their military service have been re-called to the army, and soon a general call will be announced for a certain age range to introduce themselves to the army.

On Turkey’s side, several thousands of troops have been prepared for a possible attack on Armenia from the west, and they will enter the war if necessary.

All these cases and a series of other events show Azerbaijan’s serious intention for a large-scale military attack, and if nothing special happens, this attack will be carried out.

Simultaneously with these activities, the US, British, and French embassies in Armenia have issued statements and maps asking their nationals not to travel to the mentioned areas. In the map published by the French Embassy, the possible areas of Azerbaijan’s operations in Armenia are clearly marked.

On September 24, Azerbaijan’s Defense Minister, Zakir Hasanov, officially announced in a statement that the country’s army may carry out further military operations against Armenia as they did between 12 and 14 September. Also, the military posts that were recently occupied by Azerbaijan in Armenia will receive supplies and equipment.

In another move, Baku is hosting NATO’s OCC E&F training course from September 26. The Operational Capability Concept Evaluation and Feedback Programme (OCC E&F) is a multipurpose military mechanism designed to develop and establish closer operational relationships between NATO and potential contributor (here Azerbaijan) that are fully interoperable and capable of operating with NATO standards and procedures.