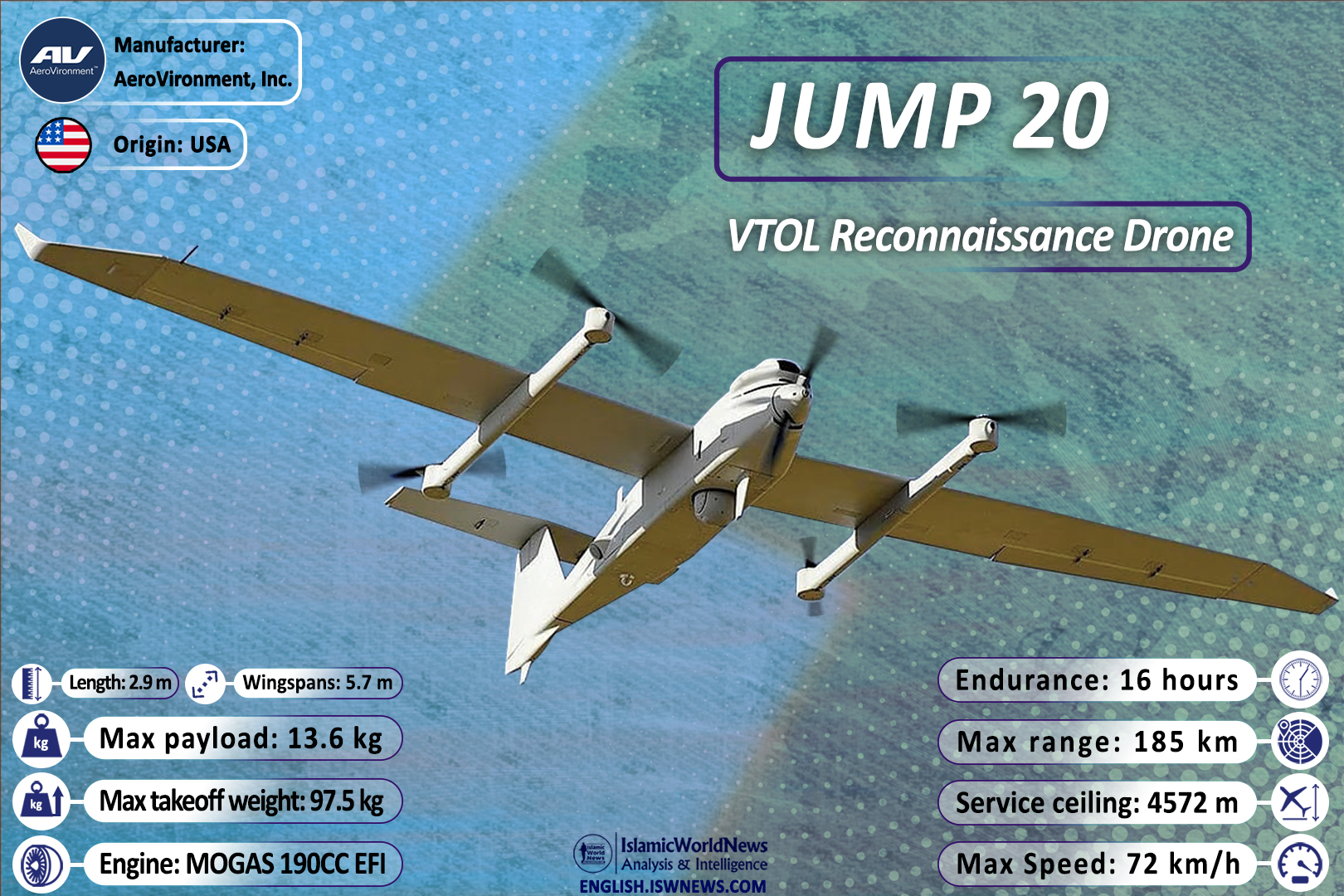 The JUMP 20 is a vertical takeoff and landing (VTOL), fixed-wing UAV manufactured by the US company AeroVironment used to provide advanced intelligence, surveillance and reconnaissance (ISR) services.

The UAV is basically intended and developed for use by naval units for intelligence, surveillance, reconnaissance and search and rescue missions. The JUMP 20 UAV was first unveiled in April 2014 and underwent several test flights in January 2015.

The United States Army has chosen the JUMP 20 UAV to replace the RQ-7 Shadow series drone. Also, its heavy fuel variant has been offered for the Australian Navy’s Tactical Unmanned Aircraft Programme.
The Mexican Navy deployed the JUMP 20 for unstated missions over Mexico in May 2016, approximately two months after the UAV was acquired by the country’s navy.

The JUMP 20 UAV has a flight duration of 9 to 16 hours and an operational range of 185 kilometers, and due to its vertical takeoff and landing capability, it does not need a runway or a launch and recovery system such as a catapult and parachute for landing and takeoff.

The vertical takeoff and landing capability is provided by twin vertically mounted rotors fitted to each wing. The UAV’s versatility, combined with VTOL capability, offers low operating costs and increased fuel efficiency. The JUMP 20 UAV uses a four-stroke EFI 190cc petrol engine and four electric motors, each of which is placed in a rotor boom. The engine has a time between overhaul (TBO) of 500 hours.

The length of this UAV is 2.9 meters, its wingspan is 5.7 meters, and the maximum take-off weight (fuel and cargo) is 97.5 kg. Payloads weighing 13.6 kg are carried in the payload bay located in the central part of the fuselage. This drone can be set up and operational in less than 60 minutes.

This drone can be operated by two crew members from the ground control station.

The Jump 20 features an autopilot system and ground control station shared with AeroVironment’s other drones, offering a highly customizable and modular platform that can be custom configured to meet operational or customer needs. The payload data is displayed on computer screens at the portable ground control station, enabling the operator to provide command and control to the UAV through the data link.

Due to the ability to carry cargo up to 13.6 kg, this UAV can use various and advanced sensors such as ARCAM 45D, electro-optical sensor and long-range infrared MWIR along with stabilizer, image processing and internal tracking.
The standard payload options are Cloud Cap Technology’s TASE series gyro-stabilised, gimballed electro-optical/infrared (EO/IR) imaging systems such as TASE400, TASE400HD, TASE400DXR and TASE400LRS. The EO/IR cameras provide imagery and video data and target tracking in real time, both during the day and at night. A video/data link, operating in L, S or C bands, transmits real-time sensor data to the ground control station.
The JUMP 20 UAV also carries a number of other sensors, including standard navigation lights, LiDAR, synthetic aperture radar (SAR), communications relay, 3D mapping sensors, communications intelligence (COMINT), and signals intelligence (SIGINT).

JUMP 20 tactical drone can fly at a maximum speed of 72 km/h and its service ceiling is 4572 meters. This UAV can transmit data within a range of 125 km, and in longer ranges, the use of satellite systems is required.