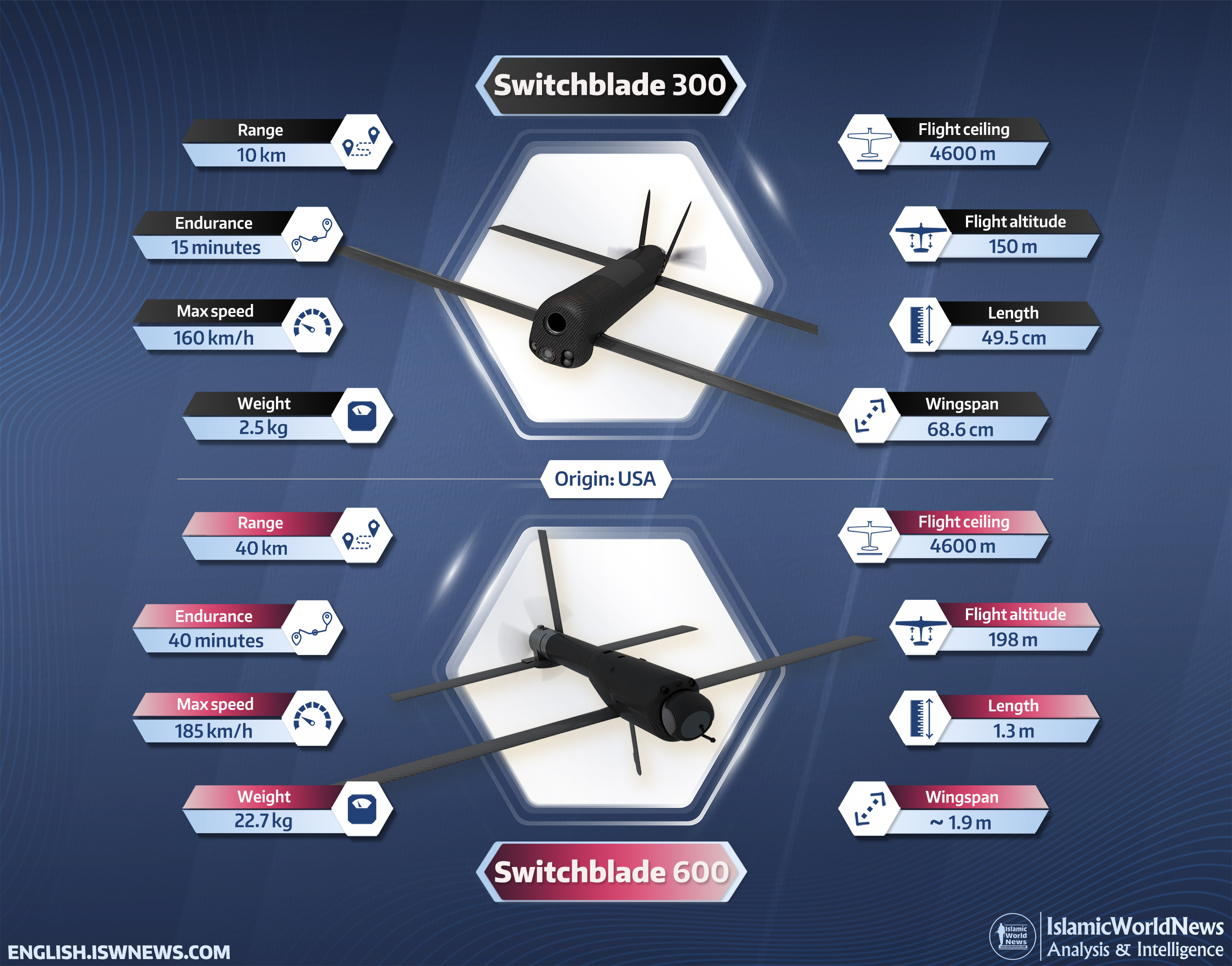 It is worth noting that during the Ukraine-Russia war, the US military provided more than 100 of these drones to the Ukrainian army.

Switchblade 300 drone:
The Switchblade 300 drone is designed as an expendable drone to increase precision firepower for platoon-sized infantry units. It is 49.5 cm long and weighs 2.7 kilograms including the carrying case and launcher, making it small and light enough for one soldier to carry.
The name switchblade comes from the way the spring-loaded wings are folded up inside a tube and flip out once released.

It can be controlled up to 10 kilometers. Its small size limits its endurance to 10 minutes. This makes it unsuited for scouting roles, but it is useful for inexpensively engaging long-range targets and assisting in relieving units pinned down by enemy fire. The Switchblade uses a color camera and GPS locating to identify, track, and engage targets, as well as being able to be pre-programmed on a collision course. Its warhead has an explosive charge equivalent to a 40mm grenade to destroy light armored vehicles and personnel. If a situation causes a strike to be called off, the operator can call off the Switchblade and re-target it.

Switchblade 300 is propelled by an electric engine, so its small size and silent flight makes it extremely difficult to detect or try to intercept, enabling it to close in on a target at 160 km/h. The Switchblade uses the same Ground Control Station as other AeroVironment drones including the Wasp, RQ-11 Raven, and RQ-20 Puma. This creates commonality and the potential for teaming of longer-endurance small UAVs to recon for targets, then having the Switchblade attack once they are identified with the same controller.
It should be noted that the multi-pack launcher with remote control capability is also designed for Switchblade 300 drones. This launcher comes in a standard 6-pack configuration weighing 73 kg. The design is scalable from 2 to 20 rounds and allows fast reloading in less than 30 seconds per round. The U.S. military has been deploying these packages since early 2019 to defend its bases. The system can be placed outside and remotely fired from the relative safety of a command-and-control center more rapidly and with up to six shots.

A touchscreen tablet-based fire control system can manually or autonomously control the Switchblade 600. It is secured through onboard encrypted data links and Selective Availability Anti-Spoofing Module GPS with a patented wave-off capability. An optional pocket digital data link module allows engagements beyond 90 km. The Switchblade 600 was developed for the Single Multi-Mission Attack Missile development program. Other methods could include a six-pack vehicle-mounted version and by air-launch. One of the advantages and interesting points of the Switchblade 600 drone is that it can hunt targets with a much longer range than Javelin ATGM, but it costs less than a Javelin missile.