Major General Soleimani: Mr. Trump the Gambler, We Are So Close to You That You Can’t Even Imagine! 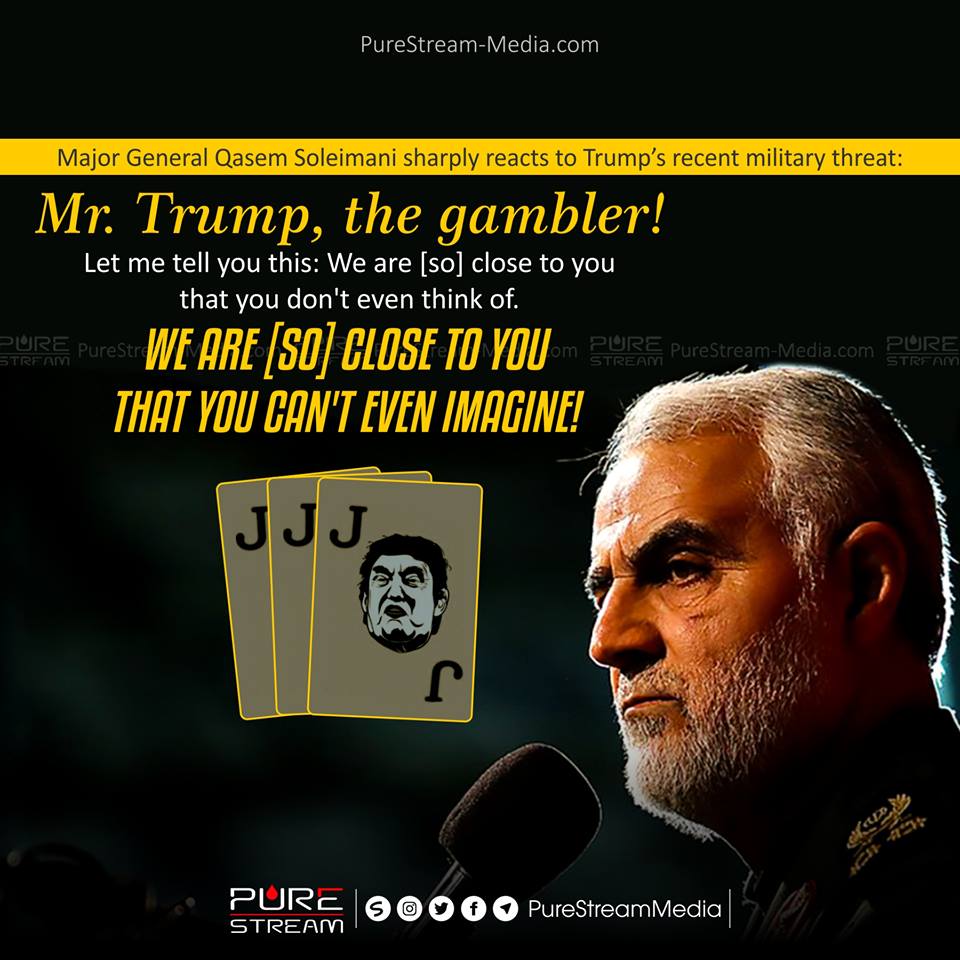 Iran’s Major General Qassem Soleimani has sharply reacted to the recent “cabaret owner-style” military threat by US President Donald Trump against the Islamic Republic, saying he takes the position to respond “as a soldier” since it is beneath the dignity of Iran’s president to do so.

Addressing Trump, the commander of the Quds Force of Iran’s Islamic Revolution Guards Corps (IRGC) said, “You threaten us with an action that is ‘unprecedented’ in the world. This is cabaret-style rhetoric. Only a cabaret owner talks to the world this way.”

He was reacting to Trump’s all-caps tweet addressed to Iranian President Hassan Rouhani, in which he threatened the Islamic Republic with actions “the likes of which few throughout history have ever suffered before.”

“It is beneath the dignity of our president to respond to you. I, as a soldier, respond to you,” Soleimani further said.
You already did all you could!

The senior general further reminded the United States of its failures in its invasions of Iraq and Afghanistan.
“What was it that you could do over the past 20 years but you didn’t?

You came to Afghanistan with scores of tanks and personnel carriers and hundreds of advanced helicopters and committed crimes there. What the hell could you do between 2001 and 2018 with 110,000 troops?

“Have you forgotten that you provided your soldiers with adult diapers and today, you’ve come out and threaten us?

What the hell could you do during the 33-day war? Is it not that you accepted Hezbollah’s conditions for ending the war?”

He further said, “Gambler Trump! I will stand against you alone. Our nation has gone through difficult times,” General Soleimani said. “You begin the war, but it is us who will end it. Go ask you predecessors.

Come; we are ready.

We are the man of this arena.

You know that this war would mean annihilation of all your capabilities.

You may begin the war, but it is us who will end it,” he said.

The senior general further warned Trump against insulting the Iranian nation and president.

“Trump! You must not threaten our nation and must not insult our president…

You must know what you are talking about; ask your predecessors and take advantage of their experiences,” General Soleimani emphasized.

The senior military official also censured the US for supporting the most hated anti-Iran terror group, called the Mujahedin Khalq Organization (MKO), saying Washington failed to achieve anything by doing so.