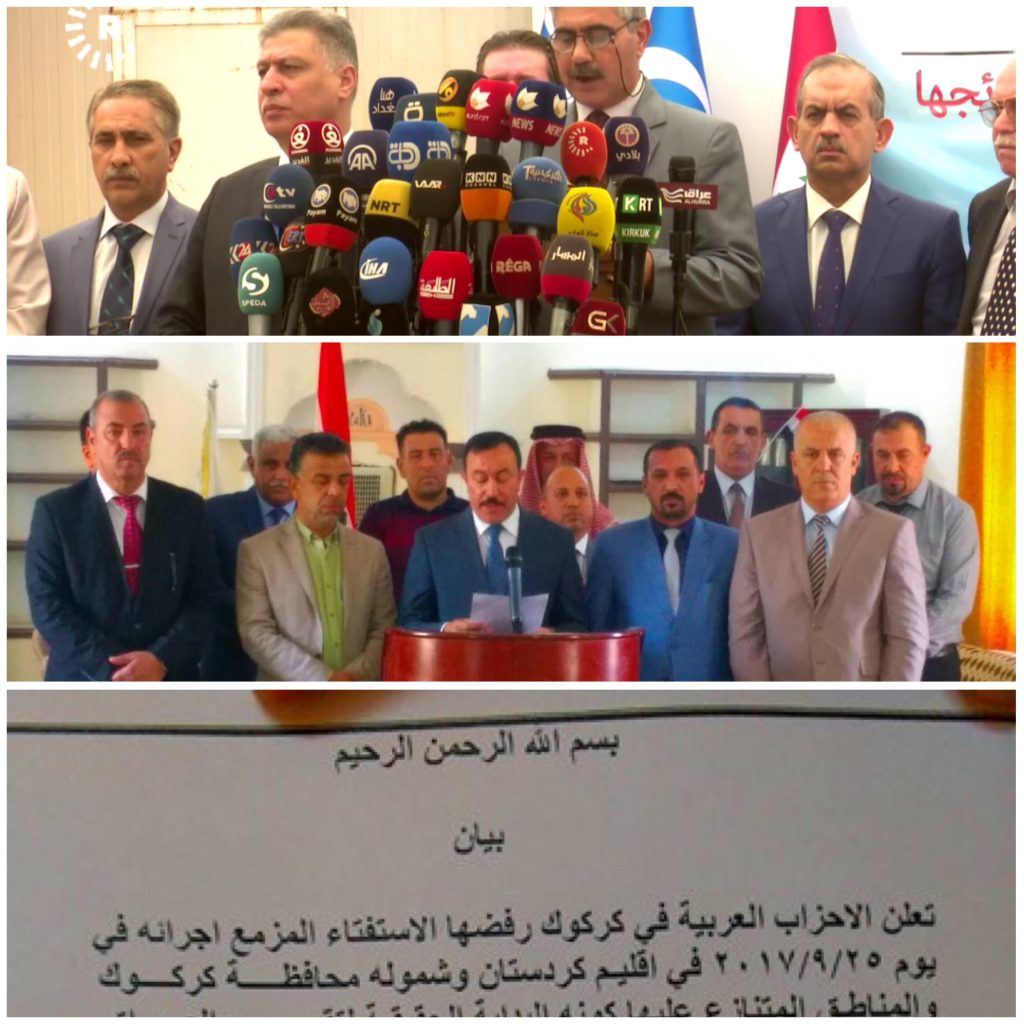 According to the news and analytics outlet of Islamic World News 13 Arab and 7 Turkmen Party of Kirkuk boycotted the referendum in Kirkuk due to the illegality, and they asked the citizens of Kirkuk not to attend the referendum.

In the statement that published by the Turkmen parties and the Kirkuk Arab parties on Saturday it has been mentioned that approving the referendum by the Kirkuk Provincial Council in the absence of the Turkmen and Arab parties of this province on 29/8/2017 is illegal and it is on the contrary to the constitution of Iraq.

Meanwhile, Mas`oud Barzani has been conducting interviews with television agencies in recent days and interviewed with agencies such as Al Arabiyah, BBC Persian and several other agencies. The words used mostly by Barzani in these interviews was, “Kurdish readiness to use the weapons to hold Kirkuk,” “we want Kirkuk to be the symbol of ethnic and religious coexistence,” and perhaps it is most importantly, “the condition for postponing the referendum” .
– “Kurdish readiness to use the weapons to hold Kirkuk,”
These​ conditions and differences between parties and ethnic groups in Kirkuk, and since Kirkuk is now officially affiliated with and part of the central government of the country.
With Barzani’s threat that they will use weapons to keep Kirkuk and his stubbornness the city will not have appropriate status after this referendum…

– “We want the kirkuk to be the symbol of ethnic and religious coexistence.”
The Kirkuk Provincial Council is composed of 41 seats, without the participation of Turkmens and the majority of Arabs on 29/8/2017, the Kurds of this association with 26 seats, were able to vote in a referendum in Kirkuk,  It is also one of the signs of the lack of coexistence and the abuse of being the majority in this province.

– “The condition for postponing the referendum”
While Barzani faced with a lack of international support (other than the Israeli, Saudi and Emirati regimes), and faced with the opposition of the central government of Iraq, Turkey, Iran, the United States and other European countries as they say this referendum should not be hold or should be postponed.
Several times he has asked for a guarantee to postpone referendum to another time on another date, in reply to a journalist asked “how may you accept to postpone the referendum” he said that to approve of not holding a referendum setting another date in the Iraqi parliament can be one of these guarantees.
*While the referendum has no legitimacy so far, it can be one of the same excuses that many believe is to gain interests like the previous years from the central government.

Barzani’s-led party, by using Eqlim’s(Iraqi Kurdistan) parliament as a weapon more than two years ago, prevented  from adopting several laws to adjust Eqlim’s department and prevented the entry of the parliament’s chairman from the Guran (change) party into the city of Erbil and the Parliament building and In practice, the doors of this parliament remains closed until today And the government that holds the presidency and its key ministries, manages the parliament without supervision.

But this time Barzani, in order to legitimize his referendum, is now trying to activate the same parliament that he has shut down, but on one condition that the presidential of the Eqlim should not be voted, which has been opposed by several other parties.

The latest news is that Barzani intends to use the method used to approve the referendum in Kirkuk, and through the Eqlim’s parliament and by gathering a majority of the members, despite the absence of the chairman and vice president of Parliament, legitimize this referendum.