First British Ship Sailed the Strait of Hormuz After Detention of Stena Impero; Iran Is the Security Provider in Persian Gulf Not Western Warships! 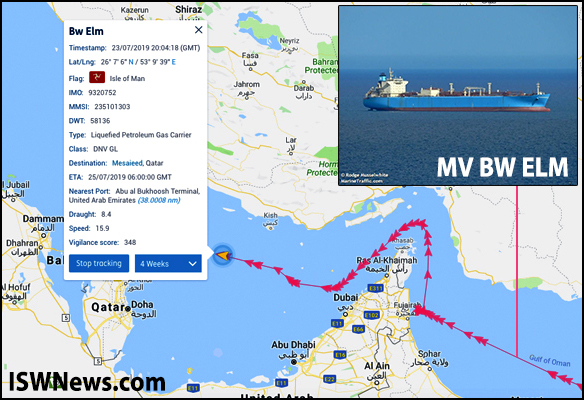 On Tuesday, British BW Elm LPG tanker sailed through the Strait of Hormuz. The ship has a capacity above 10,000 dwt and is the first ship to enter Persian Gulf after British tanker Stena Impero was detained by IRGC.

Some points regarding the news:
– Considering that the Department for Transport in London has raised the security level for British-flagged shipping to Level 3 in Iran’s waters, British ships still take the risk to sail through these waters. Since the world needs the energy of the biggest energy provider of the world, i.e., Persian Gulf. Thus, ships need to sail through the Strait of Hormuz and accept Iran’s requirements, even if USA or UK warn about it.

– Regarding the warships which provide so called escort for trading shops in Persian Gulf. The number of ships sailing through the Strait of Hormuz and Persian Gulf are very high, how many ships can these warships escort? Indeed the capability of these warships to cover the whole area and all ships is very limited and insufficient.
Therefore, if Iran wants to perform an operation against any ship in the Persian Gulf and the Strait of Hormuz, Western and Eastern vessels cannot do much about it.

A ready example is detention of Stena Impero. According to UK’s proclaim, a few days before the incident, IRGC naval force wanted to detain British Heritage which was unsuccessful due to HMS Montrose’s interference.
Even if we accept the proclaim, what happened next? Another British tanker was detained by Iran shortly after. In the same day that Stena Impero was detained two more ships were halted but then released by Iran.
It is true for all the ships in Persian Gulf and Iran is the provider of security of maritime in Persian Gulf and not British or other Western countries’ military vessels.
If no more ships have been detained or won’t, it is only since Iran does not have the intention not that it cannot. Detention of Stena Impero was a clear message to western countries specially UK and US and Iran is basically not adventurous like USA and UK.

As Iran sent a message on channel 16 that “If you need help call Iran’s vessels.”, the security of Persian Gulf is to be provided by Iran and no need for Western warships.

Image of British Heritage which shows HMS Montrose is preventing its detention.