Khamenei: “Hamas is in the heart of the Palestinian movement” 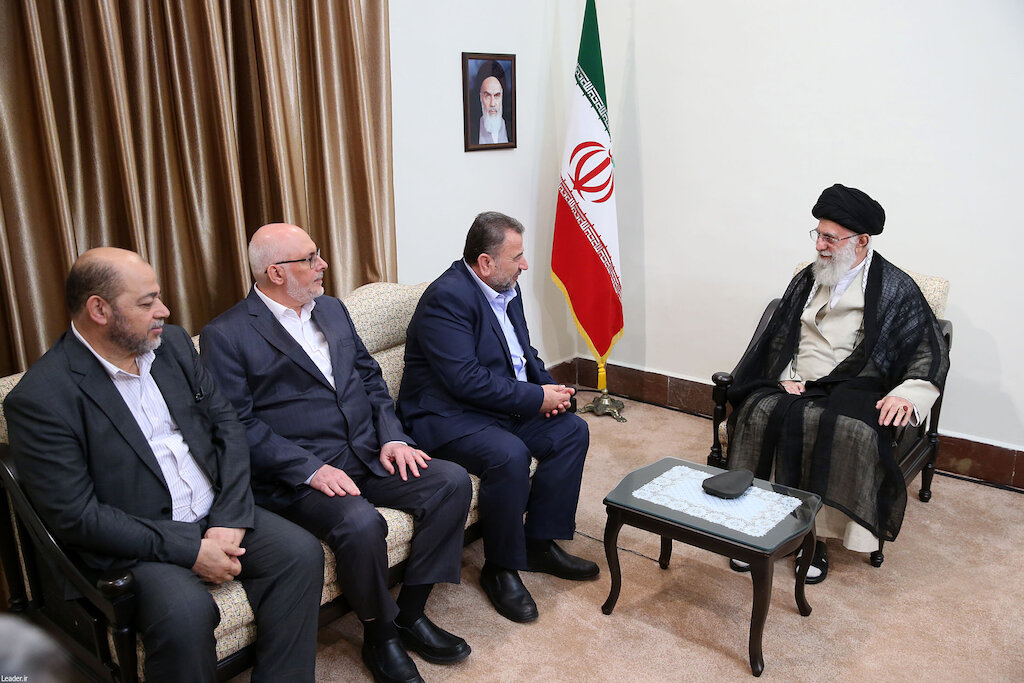 Saleh al-Arouri, the Deputy Chairman of the political office of the Palestinian Islamic Resistance Movement (Hamas) and his entourage met with Ayatollah Khamenei—the Leader of the Islamic Revolution— on July 22, 2019.

Leader of the Islamic Revolution Ayatollah Ali Khamenei said on Monday that the issues of Palestine will definitely come to a conclusion in favor of the Palestinian people and the larger Islamic world.

The Leader said the resistance and resilience of the people of the Gaza Strip and the West Bank herald victory.
“God has promised help and victory to those who stand steadfast on his path, yet the realization of this promise has requirements, of which the most important ones include Jihad, struggle, and tireless efforts in various dimensions, including political, cultural, intellectual, economic and military aspects,” the Leader explained.
Elsewhere, he said that when it comes to the Palestinian cause, the Islamic Republic does not observe any reservations in dealing with any country in the world.
“We have always announced our view on Palestine clearly and transparently. Even those friendly countries with whom we have different view in this respect, are aware that the Islamic Republic is very serious on the issue of Palestine,” he added.

Elsewhere, the Leader said that the final victory of the Palestinian people and the return of this holy land to the Islamic world will not be strange and unachievable.
“To us, Seyyed Hassan Nasrallah’s remark that ‘God willing, I will perform prayers at al-Aqsa Mosque,’ is absolutely achievable,” the Leader boasted.
The Leader also described the U.S.-devised “deal of the century” as a “treacherous” plan.
“The objective behind this dangerous plot is annihilation of the Palestinian identity among the Palestinian people and youth. It [the plot] should be countered and we should not let them annihilate the Palestinian identity through using money,” he noted.
Under the deal of the century, U.S. President Donald Trump has proposed to limit Palestine’s land to around half of the West Bank.
Ayatollah Khamenei also said that another way to counter this plot is for the Palestinian people to make progresses in countering the occupiers, and this is something which is happening.

Al Arouri said, “The defense advances made by Hamas and other resistance groups are by no means comparable to past years, and today all the occupied territories and the main and sensitive Zionist regime’s centers are within the reach of the Palestinian resistance’s missiles.”
“As you pointed out, we believe that based on the divine promise, Quds, and Palestine will be freed from the tyranny of the Zionists, and all of the fighters of God, and the Muslim Ummah will perform prayers at the Al-Aqsa mosque,” he said.
He also praised Iran’s support for Palestine.

Referring to the U.S. and Zionists’ hostilities against the Islamic Republic and their imposition of sanctions and threats, Mr. Saleh al-Arouri pointed out: We, as the movement of resistance and the Hamas movement, declare our solidarity with the Islamic Republic of Iran, and insist that any hostile action against Iran is indeed a hostile action against Palestine and the Resistance movement, and we consider ourselves to be at the forefront of supporting Iran.

At the end of the visit, Hamas delegation offered as a gift a carved image of the Al-Aqsa mosque to the leader of the Islamic Revolution.