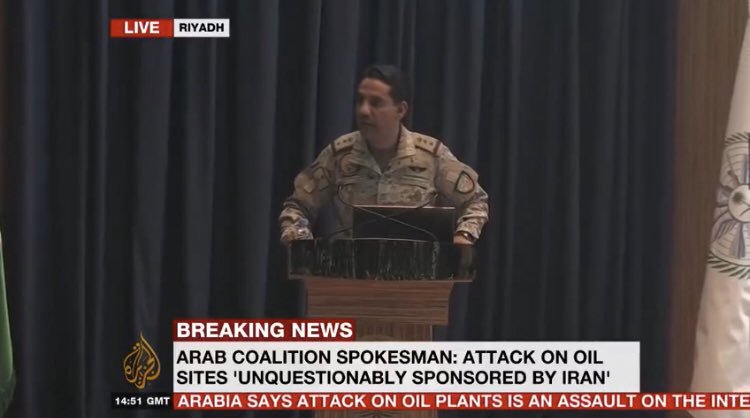 Press conference was held and drones wreckages were displayed but actually no evidence was shown by Saudis!

Saudi Defense Minister has stated before that in the conference they will show evidences to show Iran’s role in the attack to Aramco.

Drones were made in Yemen and the cruise missile was Yemeni Quds 1 cruise missile as anticipated.
Even if we believe that Iran helped Yemen to build these drones before, that doesn’t mean Iran did the attack to Aramco! For example USA has sold Saudi weapons that they use to kill Yemeni people, does the US carried out these attacks on Yemen or Saudi Arabia itself?!

The alleged cruise missiles shown in the press conference that was said were found in north of Saudi and northwest of Abqaiq, no evidence were present by Saudi and this could be from southern parts of Saudi! AnsarAllah has used this kind of cruise missile a lot in south of Saudi.

In this conference some generic images were shown that show the alleged routes of proclaimed missiles and drones.
How some general images can be strong evidence?!

The images showing the alleged route the drones and missiles flew from northwest, was presented as well.
Is it really an evidence?! These kinds of images were circulating in the social media, some were made by amateur users. So presenting some images like those without any other evidence doesn’t mean anything.

Nevertheless, Saudi Coalition spokesperson said that they are working on determining the exact points of launch of missiles and drones and the information will be provided once finished…

Is this the strong and firm evidence that Saudi and US were talking about to accuse Iran?!
We are still waiting to see the evidences USA and Saudi want to show to prove their claim.