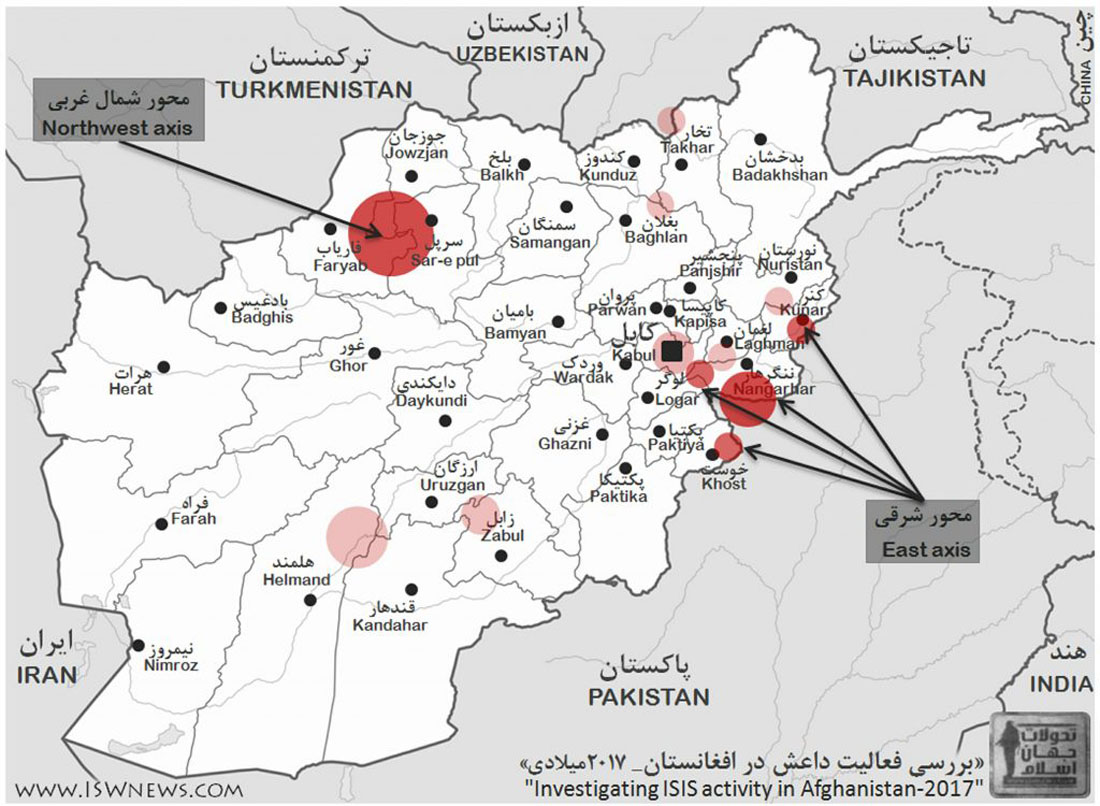 The complicated ISIS phenomenon not only in Syria and Iraq but also in Afghanistan is active and due to unstable situation in Afghanistan after four decades of devastating wars, they are

The issue of wars in Afghanistan in last decades and continuing them by Taliban needs a separate article, which will be addressed in near future. ISIS defeat in Syria and Iraq, makes the presence and activities of ISIS in Afghanistan important according to these points:

Apparently ISIS main goal in ISIS Afghanistan (according to published maps by ISIS) is to dominate over Khorasan, which roots into their believes regarding apocalypse.

But obviously there are more important goals, among others, threatening Shi’ites in Afghanistan and also Iran and Pakistan later. (Since Fatemiyoun and Zeynabiyoun troops have key role in defeating ISIS, weakening this strong point is in the schedule of ISIS commanders).

On the other hand, bad financial situation, tribal disagreements, disappointments from Taliban or government and supports of intelligence services of western countries, are among the reasons ISIS survive in Afghanistan.

As we also mentioned in “ISIS growth in Afghanistan” article, foreign members of ISIS in Afghanistan are mainly from Uzbekistan, Tajikistan, Kyrgyzstan, Pakistan, Iraq and Kazakhstan, who were active in “Islamic Movement of Uzbekistan” groups or ISIS in western Asia. (Islamic Movement of Uzbekistan who were active in Pakistan, as well, started their military activities against Pakistan army in March 2004 and were in coalition with Taliban and Al Qaeda.)

Military tactics of ISIS in Afghanistan is similar to theirs in Iraq and Syria, which is Guerrilla (irregular) war. Unfortunately some of hideous activities such as Jihad Al-Nikah which attracts some people happen in their territories. (The devastating influence of these activities are not only to destroy the Islam credit but is more to destroy next generation, which is one of the goals of secularism and to increase the rate of illegitimacy in a thirty year religious war.)

In eastern Afghanistan some regions specially in Nangarhar, Khost and Kunar provinces are reported to be ruled by ISIS but since that region is mountainous and impassable, it is difficult to occupy it.

In general ISIS shows up in many different regions in Afghanistan but since people do not support them or they fight with Taliban or army, they did not develop further. In previous years Afghanistan defense ministry in companion with NATO performed operations to liberate aforementioned areas but due to harsh conditions in east and local forces’ lack of activity in northwest, ISIS could survive.

P.S. Latest news from operation against ISIS in Afghanistan

Afghanistan Defense Ministry reports that from yesterday an operation was started against ISIS in east and eight villages in Khogyani, Nangarhar province so far. Also the operation in northwest (Faryab, Jowzjan and Sar-e Pul provinces) will start soon.

This operation starts while there are news that some of French and Algerian forces of ISIS after their defeat in Syria and Iraq have joined them in northern Afghanistan.