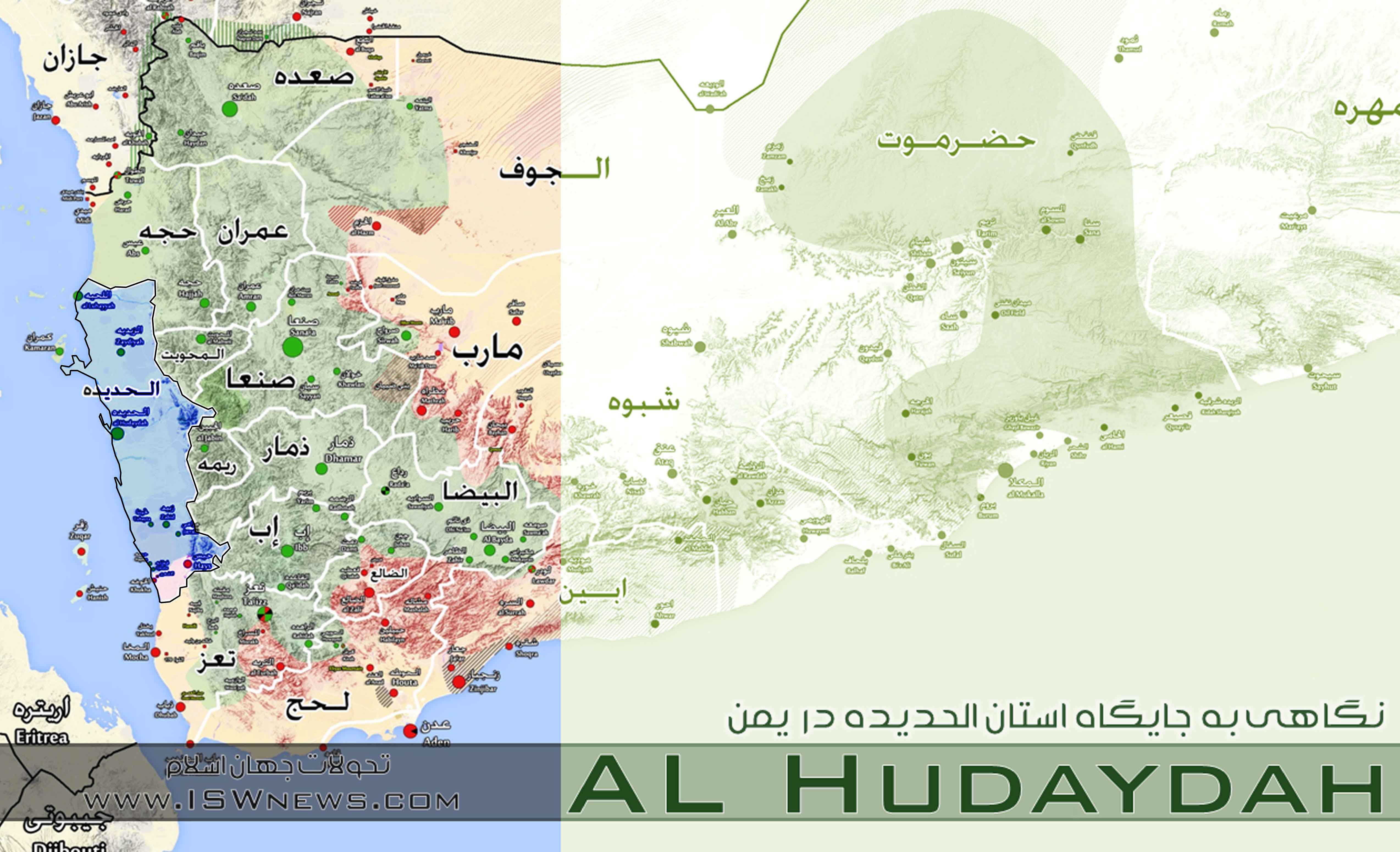 Following what we see in Yemen, the process of Saudi coalition operations have recently focused on the western regions of this country; that during these three years has been started from collapse of important strait of Bab Al Mandab and has been continued with collapse of Mouzah and Al wazaiah (west of Taiz) districts in recent days. But what is the main aim of this operation?

Al Hudaydah, Taiz and Hajjah are three western provinces of Yemen that located in the neighborhood of the Red sea.
Currently, the Ansar Allah forces accessibility to Taiz coasts have been cut off, and also Hajjah coasts have not so much role in Yemeni maritime communications; And meanwhile, Al Hudaydah ports have a better location with the sea. Therefore, the Saudi coalition dominance over Al Hudaydah can complete the ground siege of Ansar Allah and also make impossible the very limited marine communications.

A historical look to the Al Hudaydah:
Al Hudaydah is located in the 226 km of Sanaa; with Mahvit, Sanaa, Dhamar and Ibb provinces from the east and with Taiz from south, from west with Red sea, from north with Hajjah province that is near the Saadah (the main origin of Ansar Allah and neighbour of the province of Saudi Arabia), is coborder.
The geographical location, climate diversity, and plentiful wealth of this province caused the “mountain forces” to greed for occupying this region and using its vast farms.

The mountainous were the tribes from the north of Yemen, that were imposing some form of racial discrimination against Al Hudaydah main residents. The same greed on Al Hudaydah lands and discrimination against its inhabitants led to the mountainous dominance on this region, forced displacement of its original inhabitants and excluding them from the political scene and decision making.

The non-natives dominance on Al Hudaydah resources and to isolate of its inhabitants in the long time, has led to this region inhabitants voice not be heard in the international organizations and these inhabitants not be so much present in the political field.

Thus, the province that is the second populous province of Yemen, lacks media persons proportional to its population size in the country and except few cases, lacks influential media persons.

This situation has led to Al Hudaydah province media isolation, at least until before releasing the images of the famine and before Steven O’Bryan (envoy of the secretary general in humanitarian affairs and coordinator in crisis situation) visiting.

The geographical blessings of Al Hudaydah has not led to any benefit for its inhabitants but it has caused many problems for them; as far as their historical war in the frame of the Zaraniq revolution (one of the Al Hudaydah tribes) that was happened against the Imam (Zaidi) government in the decades before the revolution of Sep 26th 1962, and has led to isolating and complete repulsing of them and finally interacting with them as a rebellious movement (not one of the 26th Sep revolution puzzle pieces); and same history has led to many people accuse the Ansar Allah that they want to intentionally destroy the Al Hudaydah.

The Yemen war operation planning room has not confined to making the religious and ethnic divisions, and in some cases in the process of planning the operations have attempted to find historical similarities.

For example, the dominance on Al Hudaydah (that is considered the key to Ansar Allah surrendering and the realization of the six-part system), is the path that the Ottoman kings (Sultan Abdul Majid I) considered for dominance on the north of Yemen and moving for occupying the Sanaa.

Therefore, cutting the access and connection of  Ansar Allah with the sea, complete land blockade, moving to Sanaa, imposing political pressure and having upper hand in negotiations and… are the factors that have led to Saudi coalition command room to think about occupying the Al Hudaydah, the second populous province of Yemen.