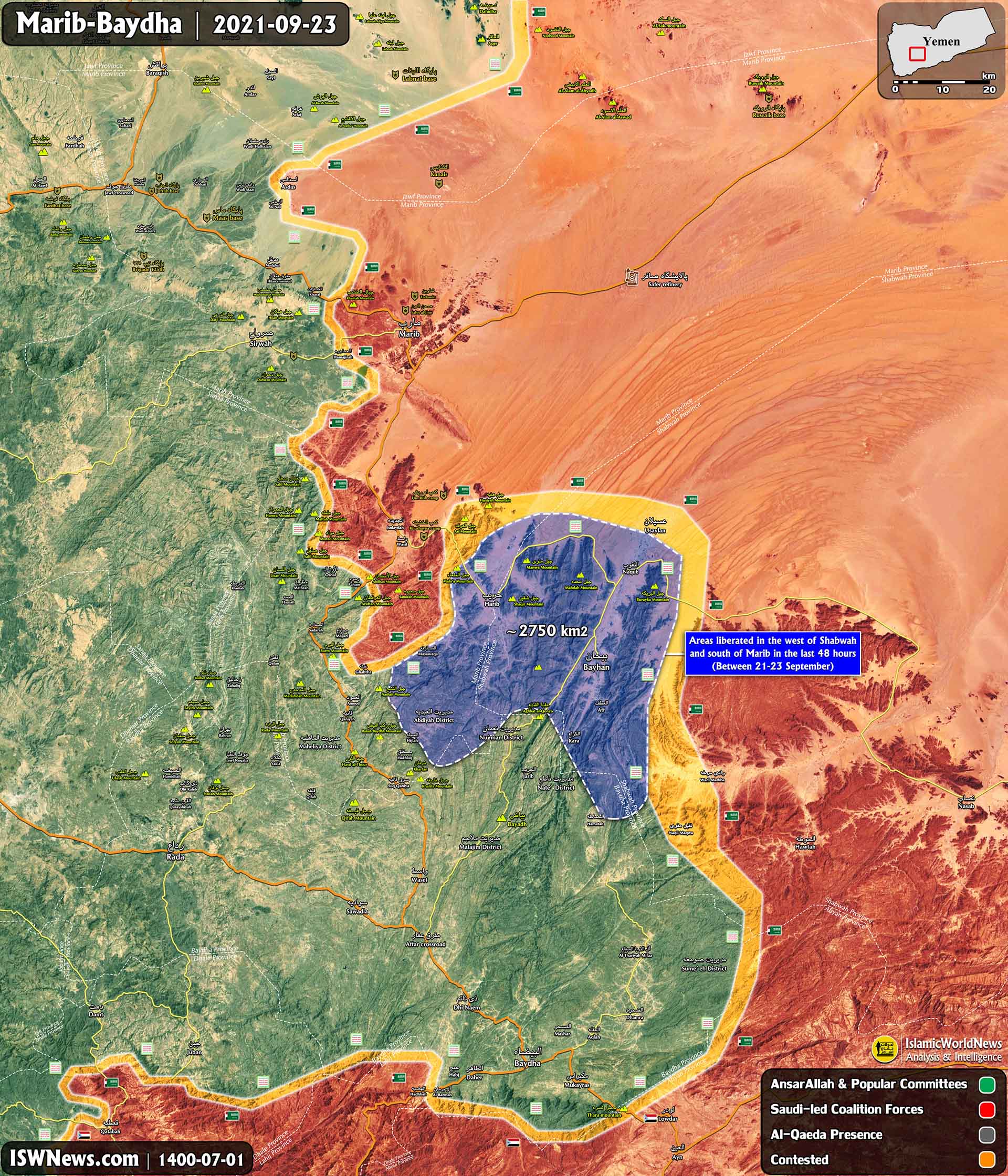 ISWNews Analysis Group: More than 2,750 square kilometers have been liberated from the occupation of Saudi-led forces during operations by Ansar Allah and Popular Committees in the west of Shabwah and south of Marib provinces.

The advance of Ansar Allah forces on this axis came after large areas of the east and southeast of al-Baydha province had been cleared of Takfiri terrorists over the past month following a series of operations.

Therefore, after ensuring the stabilization of the eastern fronts of Al-Baydha for Ansar Allah, as well as the weakening and breaking of the defensive lines of the Saudi coalition along the entire northern fronts of Al-Baydha province, Ansar Allah penetrated to the western depths of Shabwah province with the aim of cutting the important Ataq-Marib road. On Tuesday, September 21, with the advance in Shabwah province, Ansar Allah succeeded in liberating the important town of Bayhan and its surrounding areas.

Following these advances, Ansar Allah forces and the Popular Committees reached the Ataq-Marib road and the Usaylan area and cut off this important road. The Ataq-Marib road is considered a strategic and important route for the Saudi coalition, and the loss of control over the road has important implications for the future of fighting in the southern province of Marib. By cutting off this road, the logistical route of the Saudi coalition from the city of Ataq to the city of Marib was practically blocked.

During the last 24 hours, with the stabilization of the advances in the west and north of the Bayhan dsitrict and the Ain district in Shabwah province, Ansar Allah has shifted its progress to the south of Marib province and the Harib district, and by placing Abdiyah district in the south of Marib province under siege, the coalition forces was forced to withdraw from Abdiyah district, thus liberating large areas of southern Marib province from the occupation of Saudi coalition forces.

Currently, clashes continue in the districts of Jabal al-Murad and Al-Juba, as well as in small parts of the south of these two districts. Ansar Allah forces have been attacking Um al-Rish mountain for the past few hours, and it appears that Ansar Allah intends to advance along this axis, establish another siege on Al-Jubah and Jabal Murad districts, and force Saudi coalition to withdraw from these areas.

Regarding the progress of Ansar Allah, it is noteworthy that all these achievements have been achieved in just about 48 hours, and this shows the adoption and application of correct and effective tactics by Ansar Allah and also due to the experience that Ansar Allah has achieved because of several years of fight with the coalition of Arabic and Western countries, as well as the role of the advisers of the Islamic Revolutionary Guard Corps (IRGC) and Hezbollah, and above all, the power of faith and trust in God.