Review of Saudi coalition operations in Marib and Shabwa provinces 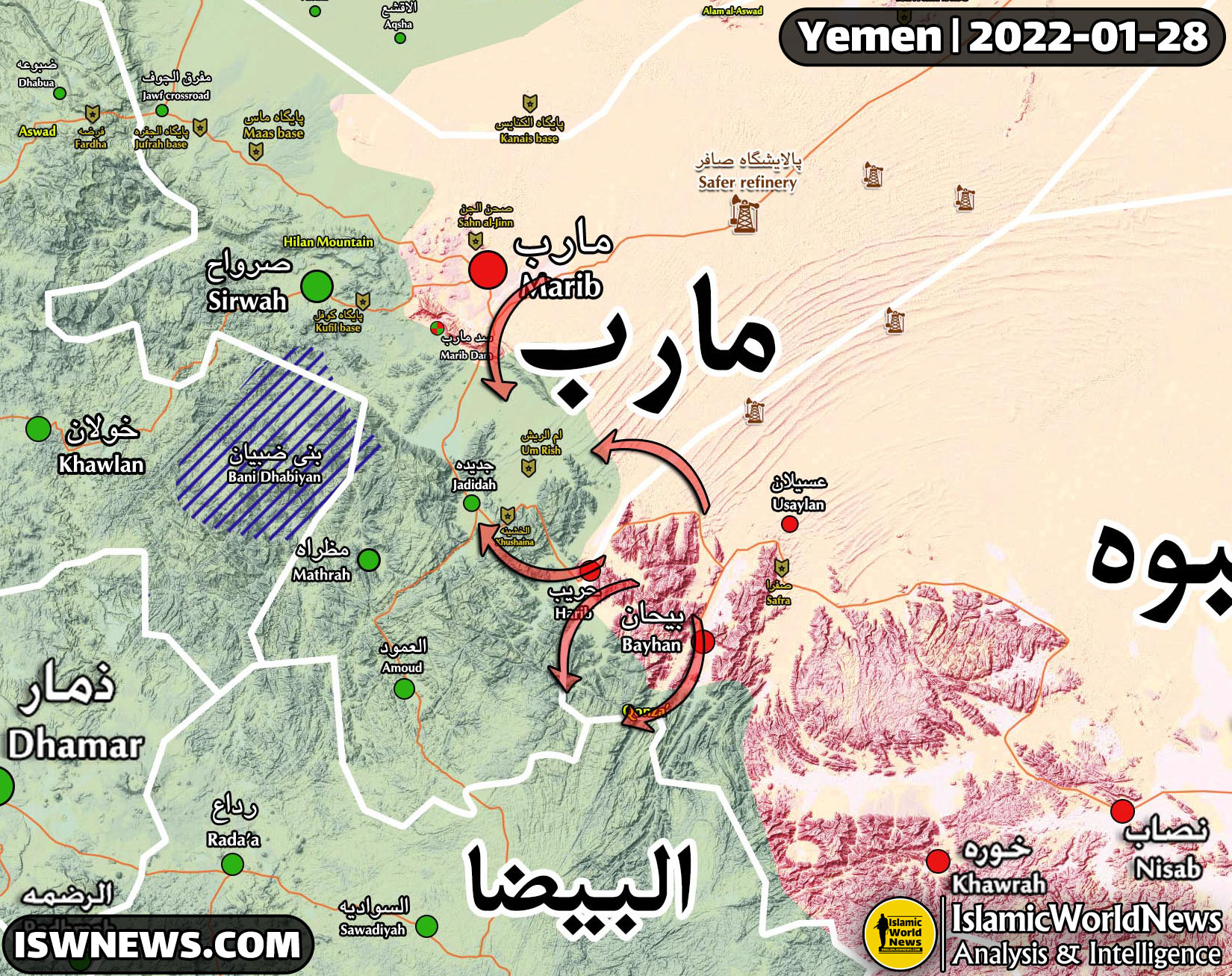 The recent operation by Saudi coalition on Shabwa and Marib provinces marks an agreement between the UAE and Saudi Arabia to rescue Mansour Hadi’s ousted government. But what concessions did the Saudis ceded to UAE to keep Marib?

On November 12, 2021, an order was issued by the Saudi coalition command, which surprised many analysts and the media. In an unexpected move, they ordered the withdrawal of coalition forces from most parts of al-Hudaydah and the west coast of Yemen. According to this order, all the forces of the “National Resistance”, including the forces under the command of Tariq Saleh, Tihamah, Amaliqa and joint forces, evacuated the northern and eastern areas of al-Hudaydah and the western areas of al-Durayhimi, al-Jah and al-Tuhaita.

The most reasonable theory was assumed the fact that this retreat is done to strengthen the Shabwa and Marib fronts, and these retreats will continue until the Hays-Khukhah region in Hudaydah province.

Ansar Allah rapid advance on the Marib and Shabwa fronts had confused and weakened the Saudi coalition ground forces, and the coalition had not been able to stop Ansar Allah by sending al-Qaeda and ISIS militants. They needed trained and experienced forces to protect the city of Marib and keep Ansar Allah away from the city of Ataq, the capital of Shabwa province. With the Sudanese fleeing and the killing of mercenaries and elements of al-Qaeda and ISIS, there was no choice left for the coalition except al-Amaliqa (Giant Brigades) and Tariq Saleh forces.

According to the latest estimates from the Yemeni fronts, the Saudi coalition divided its forces on the west coast as follows: Tariq Saleh forces remained south of al-Hudaydah province to prevent possible Ansar Allah attacks, and some of them moved to the northern and western fronts of Marib.

The Tihamah forces, along with Tariq Saleh forces, carried out an operation called the “Golden Arc” around the town of Hays, which did not yield any specific results. The joint forces and the Amaliqa forces also entered the city of Ataq to retake western areas of Shabwa province.

This transfer of forces was the result of a secret agreement between the Saudis and the UAE. The UAE appears to have achieved the keys of Shabwa province in exchange for helping the Saudis to keep the Marib city. Of course, this issue will be protested by the tribes loyal to “Mansour Hadi”, and there is a possibility of a clash between Mansour Hadi supporters and the southerners in Shabwa province.

In any case, Amaliqa and joint forces under the command of Saudi Arabia and with the special support of the UAE entered the battles of Shabwa. In the first step, the UAE enticed the sheikhs of the tribes of Usayilan and Bayhan, and this led to the cancellation of peace agreements between Ansar Allah and tribes of Belharith. Thus, Ansar Allah set up a defensive line in the southern highlands of Beyhan and Ain district and prepared itself to counter a large-scale military operation by the Saudi coalition in the area.

According to the latest news from the Shabwa and Marib fronts, Ansar Allah’s first defensive line in the south of Beyhan remains stable. But the situation in the district of Ain is in favor of Saudi coalition.

The Saudi coalition in the south of Marib seeks to break Ansar Allah’s second line of defense from the al-Ma’laa heights to Haniyeh mountain, as well as advancing on the axis of Abdiyah district. If this line is also broken, Ansar Allah’s positions in al-Juba district will be weakened and the way will be opened for the coalition to move forward. The fall of these areas will eventually force Ansar Allah to retreat from the al-Balaq heights and the southern areas of the city of Marib. Because they will be under a quasi-siege from the north, east and south.

Simultaneously with the transfer of most of the Amaliqa forces to the central regions of Yemen, other forces under the control of the Saudi coalition, such as the Joint Forces and Mansour Hadi forces, have been deployed on the southern fronts of Marib. On the other hand, the Minister of Defense of Hadi government, Mohammad Al-Maqdashi, has visited the southern fronts of Marib, which marks the imminent operation of Mansour Hadi’s forces to retake the al-Balaq al-Sharqi heights, and Ansar Allah must prepare for a heavy battle on this front.

In general, for Ansar Allah, the future is not very pleasant for the battles of the Marib and Shabwa fronts. Ansar Allah’s delay on the western and southern fronts of Marib, for a variety of reasons, provided an opportunity for coalition forces to regroup And the Saudis brought the UAE back on the battlefield with impressive concessions. The unification of the UAE and Saudi Arabia and the use of Amaliqa forces, etc. will turn the Marib war to an erosive one. This will save the Saudis from being removed from the Yemen equation in the short term, and will increase the UAE influence in the central regions of Yemen. But Ansar Allah also has effective leverages that can thwart the Saudi coalition plans as in the past. Time will prove everything.

ISWNews
ISWNews Analysis Group is a completely independent organization maintained by a team of experts and volunteers which focuses on armed conflicts and crises. Our mission is to tell the untold, which is usually censored by the main stream media. Step in battles of the region with us!
Share it:
Amaliqa Marib Shabwa Tihamah Tihamah forces Yemen