Latest Updates on Yemen 19 September 2018; Another Karbala in Yemen! 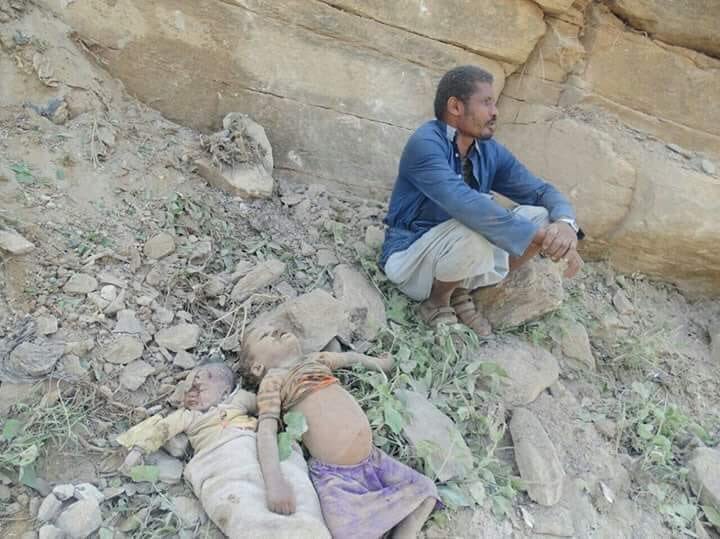 The Image is about the bombardment of residental areas of Marran region in northern borders of Sa’ada & martyrdom of Yemeni children and the sorrow and pain in eyes of their father.

Nana(16km) square and Matahin square are under Ansarallah control and heavy clashes continue along the road and Qos al Nasr area.

The Saudi-led Coalition forces trying to capture the Nana square from the southern axis.

Also heavy clashes between Ansarallah and Saudi-led Coalition forces going on in the south of Hudaydah city and along the coastline, north of Manzar and Kornish square.

18 Yemeni fishermen were martyred due to Saudi warships attack to Yemeni sailors in Khukhah’s coast; However, Saudi Coalition denied this attack and claimed Ansarallah responsible for the attack.

2. Firing a Badr-1 missile to Saudi base in Jizan.

Saudi says they were intercepted the missile.

3. Firing a Badr-1 missile to Saudi base in Dhahran, Asir province(south of Saudi Arabia).

Ansarallah said the missile hit successfully; Saudi Coalition did not comment about the attack.

4. Summary of Ansarallah operation in different axes of Baydha in recent days:

Second axis; against al-Qaeda terrorists which led to clearance of Shabka Sabah in Zi Naem.

Third axis; against Hadi’s forces which led to clearance and advance in ‘Ashar crossroad, Nate’ district.

The Coalition attacks in this axis was more successful due to lack of Ansarallah’s equipment and manpower, so the Hayfan and Rahidah is on verge of fall.