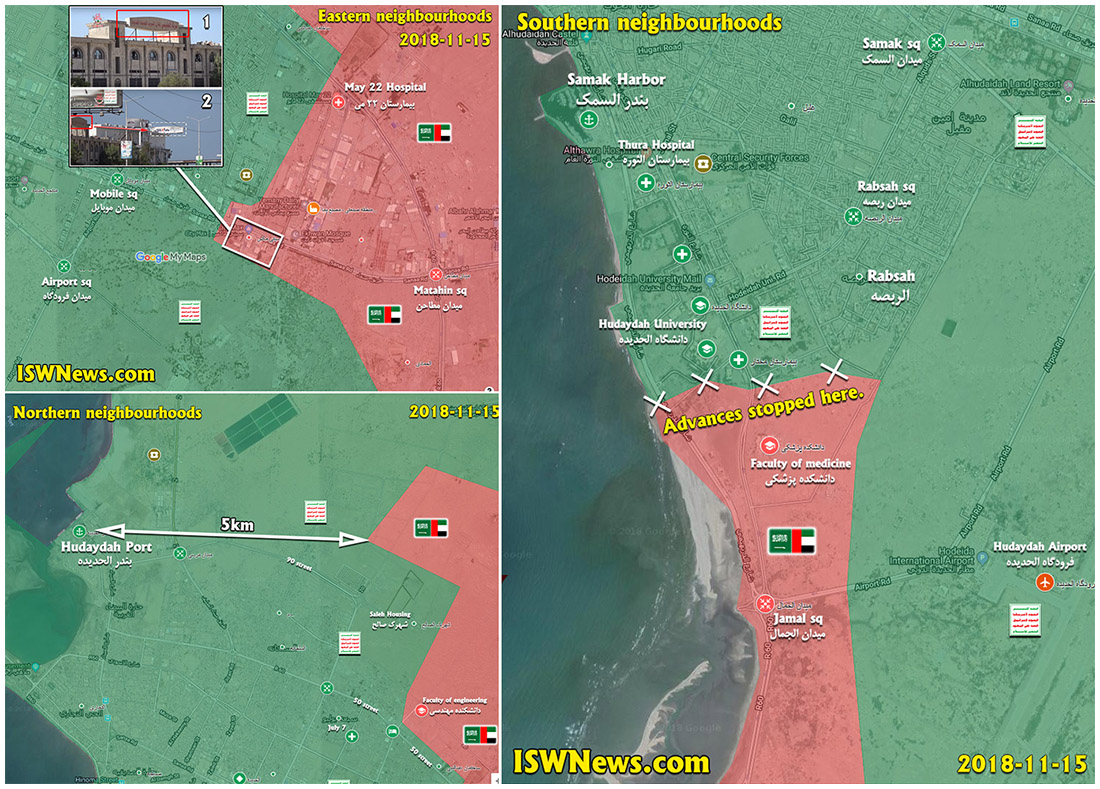 Today is the third day that al Hudaydah battles are completely ceased, however some media close to Saudi Coalition reported some news regarding resumption of the operation or maps of advances in al Hudaydah city.

They either lie or advancing in Twitter and Facebook battlefields!
The truth is that during the last three days none of al Hudaydah frontlines in three main axes, i.e., northern, eastern and western have changed and Coalition media are constantly broadcasting the old videos of advances.
Therefore it was necessary to give correct information.

Until the time of writing this news (Thursday 18:00) the situations of three axes are as follows,

Eastern axis:
Coalition forces after capturing Matahin square and 22nd May hospital, are halted near City Max.
All the clips released by Coalition under title “Coalition advance deep inside al Hudaydah” is around City Max and clips showing middle neighborhoods are recorded from top of 22nd may hospital.
Therefore, Coalition has not advanced deep into al Hudaydah and even has not reached Mobile square, otherwise clips would be released instantly by Coalition media!
As indicated in the photo, Alimi company is not in city center but near City Max…

Southern axis:
The biggest lie of pro-Coalition media is for this axis!
It has been a long time that media close to Saudi Coalition claim that Coalition could advance into the Rabsah neighborhood and over coastal street (Durayhimi street) until south of fish market (Samak Harbor) and could occupy AL Thurah hospital and al Hudaydah radio office and some parts of al Hudaydah university.

This claim is while there is not even a single photo to prove such advance. If Saudi Coalition had advanced in this critical axis, undoubtedly photos and movies of it would be broadcasted very fast. Nevertheless, some media advance in Twitter and Facebook battles!

Our local sources decline such claims.

At the moment, Saudi Coalition is halted in south of Rabsah neighborhood and Al Hudaydah university.

Thus maps released by Coalition media is either lie or wrong.

Northern axis:
Saudi Coalition has not entered the urban neighborhoods and troops are along 50 street, around 90 street and around Saleh housing. Saleh housing is in hands of AnsarAllah.
In previous days media close to Coalition broadcasted a clip which filmed from around Saleh housing toward Hudaydah port.
From that point to al Hudaydah harbor there is 5 km distance which is indicated in the map.

PS:
This unofficial cease-fire which reached the third day has pros and cons for both sides.
During this time Saudi Coalition stabilized newly captured areas and had time to send heavy armored vehicles around al Hudaydah.
On the other side, AnsarAllah by concentrating their forces increased the strength of defense lines and equipped the main roads toward al Hudaydah with many explosive booby traps.
According to a local source, al Hudaydah became a mine field!