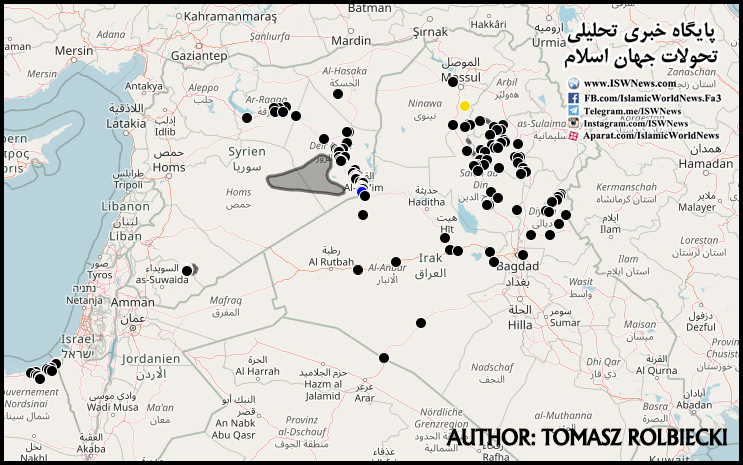 These 224 attacks were announced by official ISIS media.

Considering the broadness of the areas ISIS attacked, the most important in terms of security threats are as follows.

Iraq:
Reported attacks happened in Karkuk, Salah ad Din and then Diyala provinces more than other regions in Iraq.

Recently, numerous security operations by Iraqi forces performed against ISIS and the results either success or failure will be determined later.

Syria:
An interesting fact about ISIS activities in Syria is that they are all in the east of Euphrates River or around it and no activities observed deep inside the government controlled areas.

This implies that Syrian government did a better job to control the ISIS cores compared to Iraqi government.

The reports of ISIS attacks in Al Safa area are also about the battle with Syrian government which started from July.

Reviewing the reports of ISIS attacks in Syria, they were mainly done in areas under control of SDF.
It is noteworthy that a large number of these attacks are in Hajin area, which was passed back and forth between ISIS and SDF.

It is predictable that SDF has a long way to completely secure the area and fight against ISIS cores; it is obvious from the depth of ISIS attacks inside SDF controlled areas. Sabotage attacks including bombs and terrorist attacks are becoming usual in SDF ruled areas.

Egypt:
Northern Sinai governorate is the biggest security threats in Egypt and ISIS main activities are limited to Sinai peninsula.

ISIS attacked 18 times against Egyptian forces in 16 days, which is considerable.

An interesting fact is that all these attacks were against Egyptian troops and none of them were against Israeli troops, this is while Israeli-controlled lands have long borders with Sinai and ISIS has always announced their enmity against Israel!

Other Areas:
North of Baydah province in Yemen, Mogadishu in Somalia, Libya and northeastern border of Nigeria are some of the regions that observed ISIS attacks in the period of 16 days.

ISIS cores in northeastern border of Nigeria, some parts of Libya and north of Baydha province in Yemen are rather active.