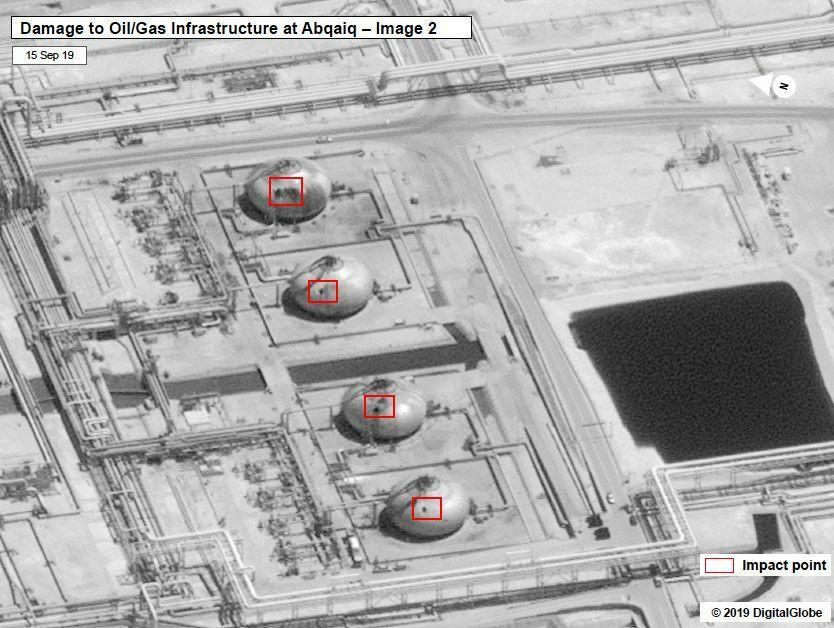 – US says that the attack was done from Iraq’s soil and by Iran’s proxies.
Even if we accept that Iran was the mastermind of attacking Aramco, Iran does not need to do such an attack, since Yemeni drones are enough for it. In another word, the risk of attacking from Iraq is too high considering that Iraq’s airspace is monitored by USA. Not Iran wants to give excuse to USA nor Iraqi officials are ready for such a risk.
Regarding the footage that was released from a desert and a hunter showing some wreckages of missiles, it is not a big deal to set up the scene without any proof.

– The West and some say the attack was done using cruise missile.
Look at the four fuel reservoirs indicated with red rectangles. In Buqayq, the holes are obviously not from cruise missile. Cruise missile with half a ton of warhead does not make a hole in tank but destroy it completely!
Other images from Buqayq and Khurais are vague and do not show anything. They say there are 17 hitting points! It is an oil refinery facility, even a spark can ignite a big fire!
Damages to other parts of refinery are due to fractions of drones attacks. In the current images of Yemeni drones, this capability can be seen.

– Sound of drones engines.
According to footages of attack to Buqayq, the sound of the engine of drones made some believe that these are cruise missiles.
Yahya Al Sari answered that their drones have two kinds of engines, jet and non jet.

– Attacking the refinery again.
My personal opinion is that Ansar Allah should attack the refinery again in a short time. The excuse to attack refineries in Saudi Arabia is given daily to Ansar Allah in Yemen since Saudis are attacking and bombing Yemen everyday.
Attacking this or other refineries in west of Saudi Arabia again rejects the West claim that it was done by Iran and also gives Saudi a proper blow to rethink. Saudi should understand that its crimes in Yemen should end soon.