Latest Map of Frontlines in Syria until 21 June 2020 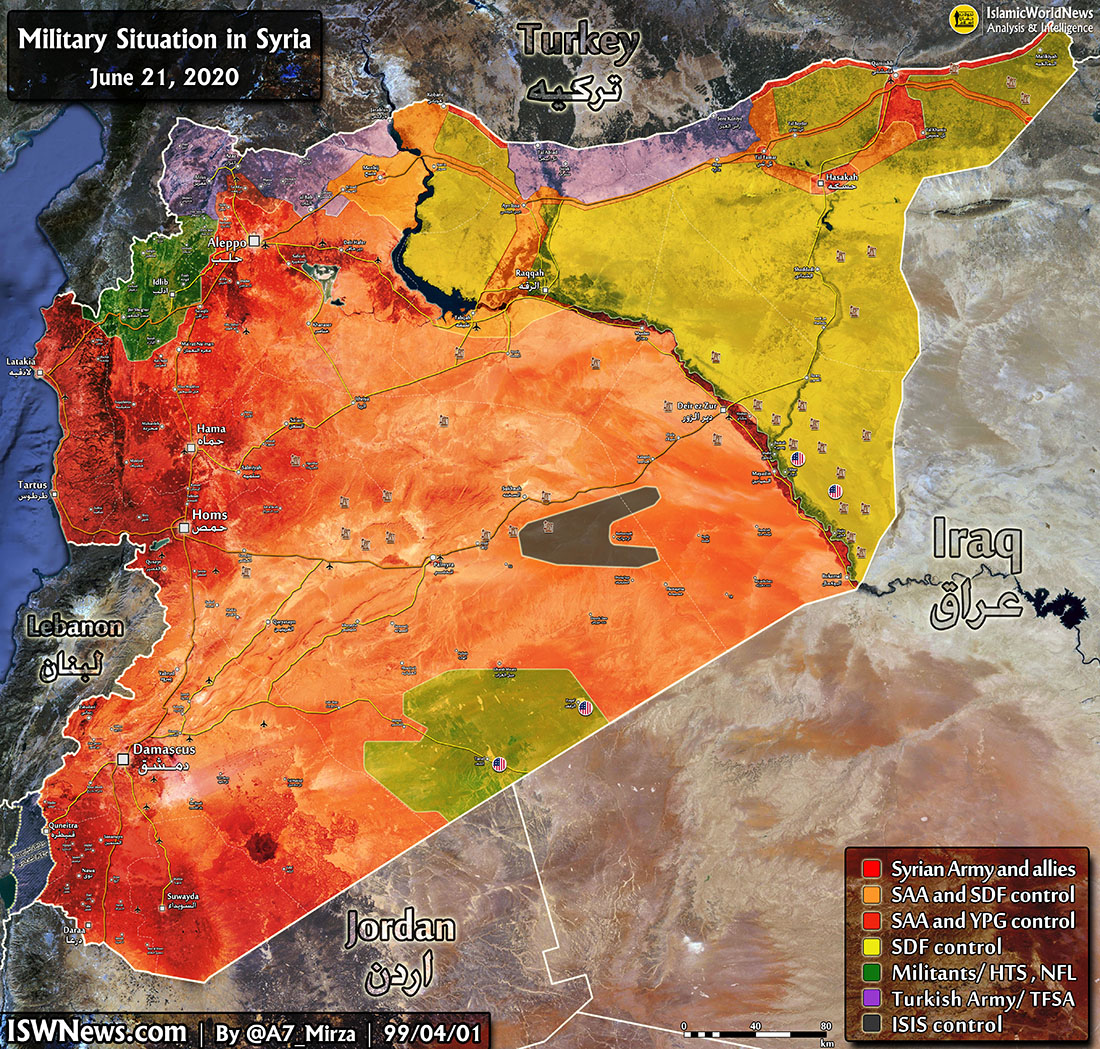 Read in this article; investigation of important changes of Syria’s battle in recent months

Northwest of Syria
Following the second stage of Syrian Army operation in Idlib area, which was started on 19 December 2019, army troops liberated 2,345 km2 of land from Turkish-backed terrorists until 4 March 2020. 763 km2 of liberated land was in Aleppo province and 1,582 km2 in Idlib province.
In despite that Turkish-back terrorists tried very hard in Idlib area to cut important M5 highway by occupying Saraqeb in the last two weeks of Syrian army operation to give Erdogan winning chips in Idlib ceasefire talks, but they failed and Saraqeb was finally liberated by Syrian army and Erdogan met with Putin empty handed.

Controversial Moscow summit took place and Erdogan and Putin reached a new ceasefire in Idlib area which was imposed since 6 Match in Idlib and M4 highway.

Since the starting date of ceasefire so far, although the advances stopped and 17th joint Russian-Turkish limited patrols launched in M4 highway, but terrorist groups have not retreated from designated areas in the ceasefire agreement. Patrols have not reached Jisr al-Shoghur yet and artillery fire exchange and daily conflicts continue in Idlib area.

On the other hand in the last three months Syrian and Turkish armies strengthened their positions in Idlib front line and it seems there will be an imminent operation.

East of Syria
– After Turkish operation “Peace Spring” in east of Euphrates and occupying lands between Raas al-Ayn and Tal Abyadh to the depth of 32 km in fall 2019, front lines are unchanged and Turkish operation is halted since 25 November 2019 after announcing ceasefire and DMZ. There is only artillery fire exchange sparsely between SDF and Turkish-backed terrorists.
In recent months, joint Russian-Turkish patrols launched several times in east and west of DMZ and near Syria’s northwest border.

– Russian army took position in Qamishli airport and a large part of it turned into a Russian airbase. Russian warplanes number also increased in Deir Ezzor airport in recent days.
In general, in recent month, Russian and Syrian armies’ presence increased in east of Euphrates. Syrian and Russian armies try to limit US influence in this area by increasing their troops and equipment which resulted in friction with SDF.

– American troops still control oil and gas reservoirs in east of Euphrates even after show retreat from northeast of Syria and it seems they do not intend to leave in near future.

– ISIS hidden cells are still active in deserts of east of Homs and south of Deir Ezzor. Their main activities are in east of Sukhnah, Kabajib and east of Mayadeen including daily and weekly sabotage and hit-and-run operations against Syrian army. Although Syrian army in recent months launched several security and cleansing limited operations, it is unlikely to cleanse the area without an extensive operation.

South of Syria
The front line in south is static and all the area is controlled by Syrian army. However, there are sparse IED operations by remainder of militants and ISIS terrorists from previous cleansing against Syrian army. It has been intensified in the last two months and Syrian army has deployed more troops in the southern areas to subdue these activities. Protests and some political activities have increased against Syrian government and allies in south of Daraa province in the last month.

Read the previous article about Syria here: Latest Map of Fronts in Syria until 22 February 2020