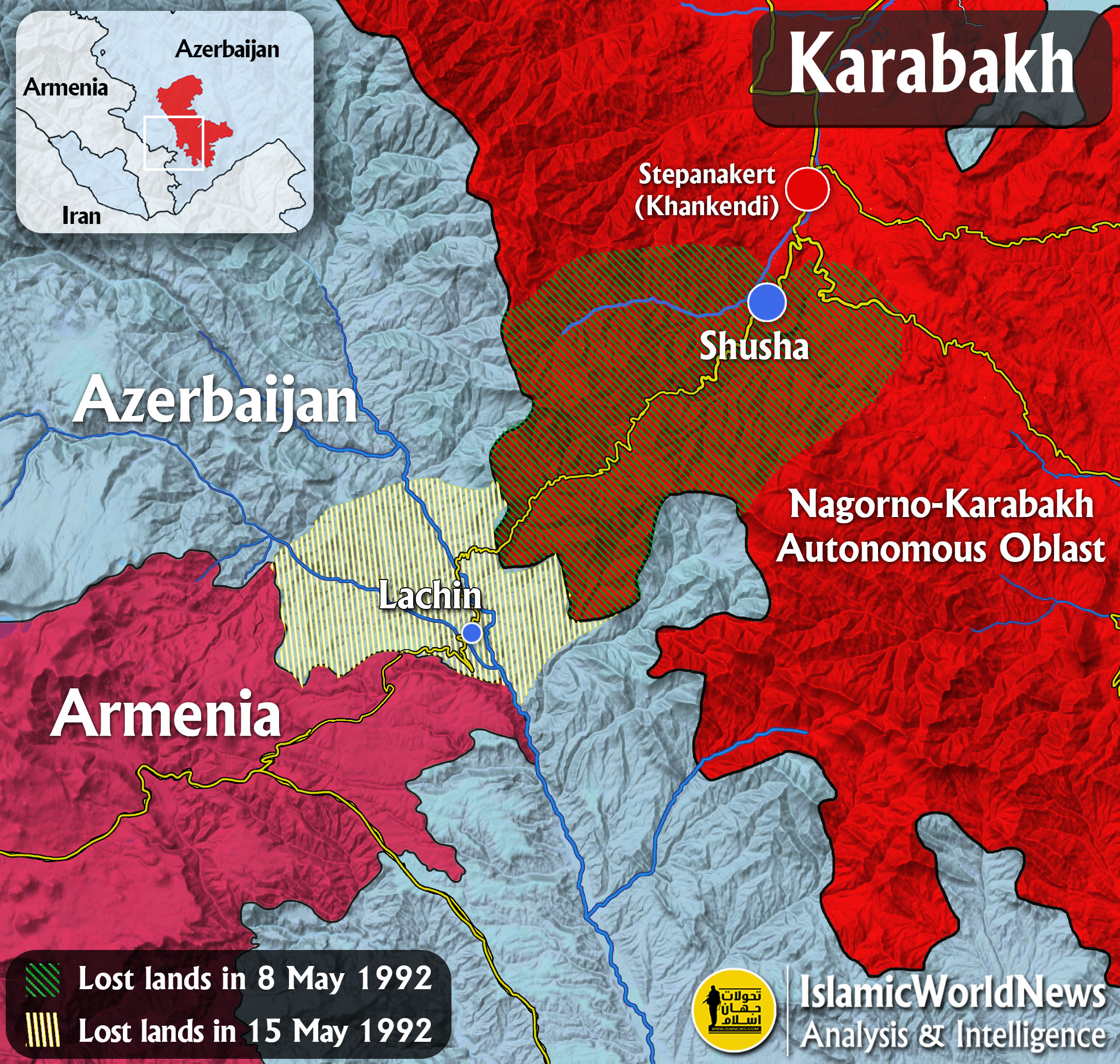 Ilham Aliyev in a meeting with high commanders of army in a military base two weeks ago talked about treachery of a “Azerbaijani Popular Front Party” in 1992 which gained power by giving the town Shusha to Armenia in Nagorno-Karabakh war. Although talking about it is not a new subject in Azerbaijan media and many analysts knew it already, however, digging what Ilham Aliyev stated has an important aspect which involves Islamic Republic of Iran and Azerbaijan media won’t talk about that aspect never.

Azerbaijani Popular Front Party
In the last years of Soviet era, political and racial crises in addition to conservative policies if communism, prepared a situation for radical movements and parties to expand including “Azerbaijani Popular Front Party”. The leadership was a hardcore fan of Pan-Turkism since the beginning and inclined toward Turkey. Calling northwestern provinces of Iran “Southern Azerbaijan” and slogan of “one nation, two governments” are among their inventions.

With the help of reforming and daring behaviors Azerbaijani Popular Front Party could absorb the Azerbaijani refugees rejected from Armenia which enabled the movement to have a more important role in Karabakh conflict.
The ever increasing tension in Karabakh and transforming into an armed crisis in the last days of communism sovereignty, emphasized on the importance of having army for everyone. Azerbaijani Popular Front Party, the biggest and most important party of the time, could get armed just before the independence of the Republic.

The evolutions suggested Azerbaijani Popular Front Party is the main candidate for the leadership of the newly independent Azerbaijan Republic but the parliament reassigned Ayaz Mutalibov, the last communist leader of Azerbaijan, with the condition to abolish communism party and swear to the new republic.

While the newly formed government did not have an army and tensions increasing everyday in Karabakh, there was the necessity for an armed party, therefore Azerbaijan divided between former communist politicians in power with Azerbaijani Popular Front Party and its armed supporters controlling the critical areas.

Iranian peace and foreign coup
On 7 May 1992 presidents of Armenia and Azerbaijan met in Tehran. In the joint statement of three countries presidents it was mentioned that there will be a seven days ceasefire and delegates of both side start negotiations in Karabakh with supervision of Iran FM.

Obviously Caucasian political sides did not like it, as Iran took the upper hand to solve the issue of Karabakh, having more influence than Turkey and USA. As mentioned above, Azerbaijani Popular Front also did not want the conflict to be solved by Ayaz Mutalibov government. Beside their political future was in danger with their extreme anti-Iran policies, therefore, on 8 May 1992 (just one day after the agreement in Tehran), 2,500 militia affiliated to Azerbaijani Popular Front left Shusha town around 20:00 and the remaining forces could not defend against 700 Armenian soldiers and the town and surrounding villages fell.

Despite of no evidence of foreign influence in the coup, the new government leans toward Turkey and USA greatly and ditched Iran out of Karabakh conflict entirely.
Iran’s FM deputy traveled to Baku after the incidents but new officials of Azerbaijan showed no interest in Iran role in Karabakh conflict and repeated their claims over northwestern provinces of Iran.

Having open relationship with Israel and cold relationship with Iran are among the important changes in foreign policy of that time.
One year later, not only Azerbaijani diplomats sent to Turkey to seek military aid returned empty handed, but Turkey even did not stop exporting electricity and wheat to Armenia and this put a lot of pressure on ruling party by Azerbaijan media until some political movement even demanded reform in relationship with Iran and asking Islamic Republic to supervise solving the issue of Karabakh.
Therefore, in order to control the public mind, the State minister of Azerbaijan raised the myth of Iran’s support for the Republic of Armenia during the Nagorno-Karabakh conflict, but nevertheless, the sending of humanitarian aids to refugees of Azerbaijan never stopped by Iran.