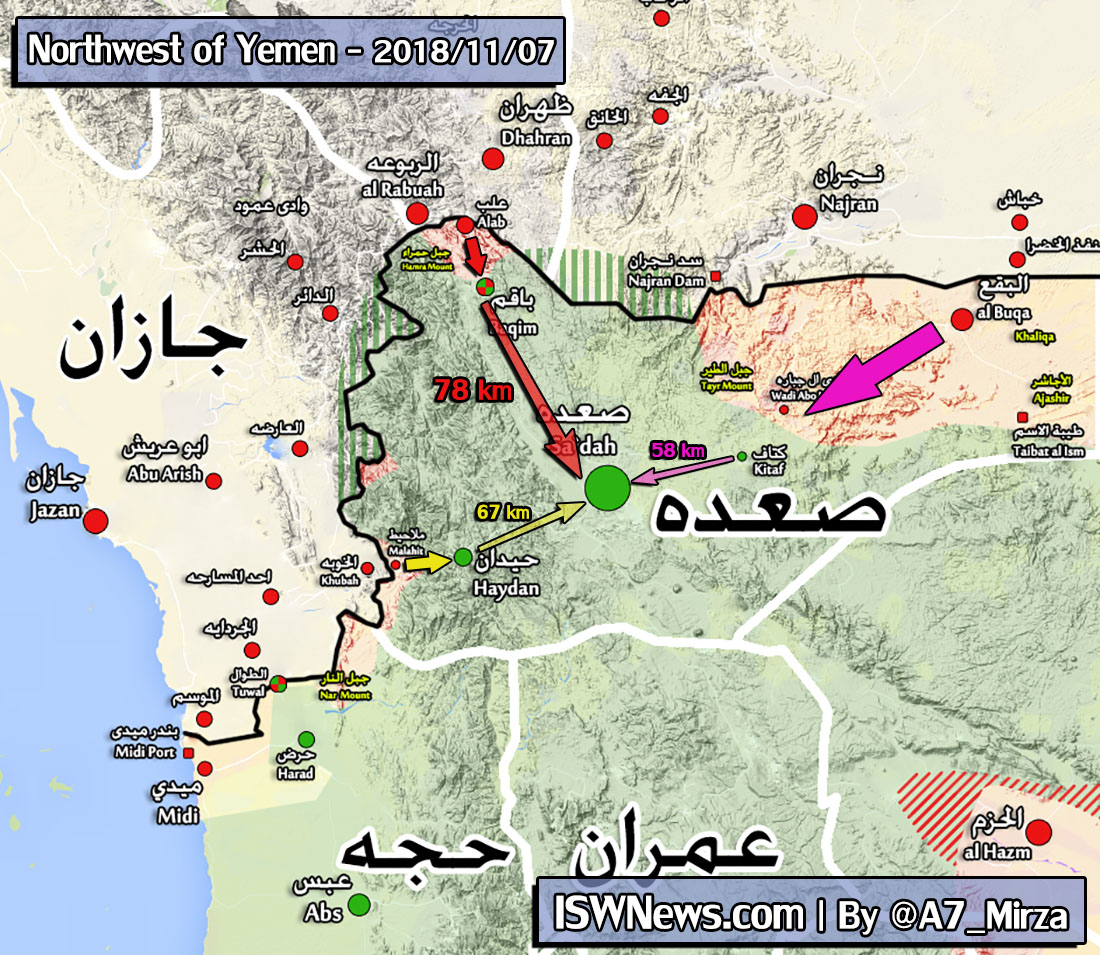 There is a severe battle in al Hudaydah at the moment but advances toward Sanaa is halted; so Saudi Coalition operation in Sa’adah is being analyzed here.

According to latest news, Saudi Coalition is operating in three axes of northern, eastern and western as follows,

1. North: which includes Alab until Baqim.

In this axis, Coalition operation has started several months ago and Alab passage has fallen and its forces has reached north gate of Baqem.
Saudi Coalition is trying to continue until Sa’adah after occupying Baqem in the direction of Sa’adah-Alab road.

In this axis, Al Baqa’ district has fallen and Saudi Coalition has come to 15 km to the center of Kitaf district.

In this axis, Malahit and most of Dhaher district have fallen and Coalition is fighting AnsarAllah at the gate of Marran heights. (Tomb of martyr Hussein Badreddin al-Houthi is in northwest of Hidan and Marran heights.)

The distance between Hidan and Sa’adah is 67 km.

Not only occupying Sa’adah is one of Saudi Coalition primary goals in Yemen but also it will be an upper hand in negotiations with AnsarAllah.
Therefore, advancing in these three axes is possible in future but two axes of Baqem and Kitaf from Hidan route are more likely to be used due to demography, distance and other reasons.

Mountain province of Sa’adah consists of 15 districts and population of one million, is a supporter and founder of AnsarAllah. They supported Hussein Badreddin al-Houthi and AnsarAllah gaining power in three decades and Yemen revolution and defeating Ali Abdullah Saleh government from 1990 until now and sacrificed unhesitatingly thus it is not easy for Saudi Coalition to occupy Sa’adah in a short time.

AnsarAllah indeed has a serious plan to defend Sa’adah and terrain of the region and AnsarAllah’s special tactics in fighting with Saudi Coalition will help them.