Discussion on Aspects of the Saudi Coalition Operation in al-Hudaydah 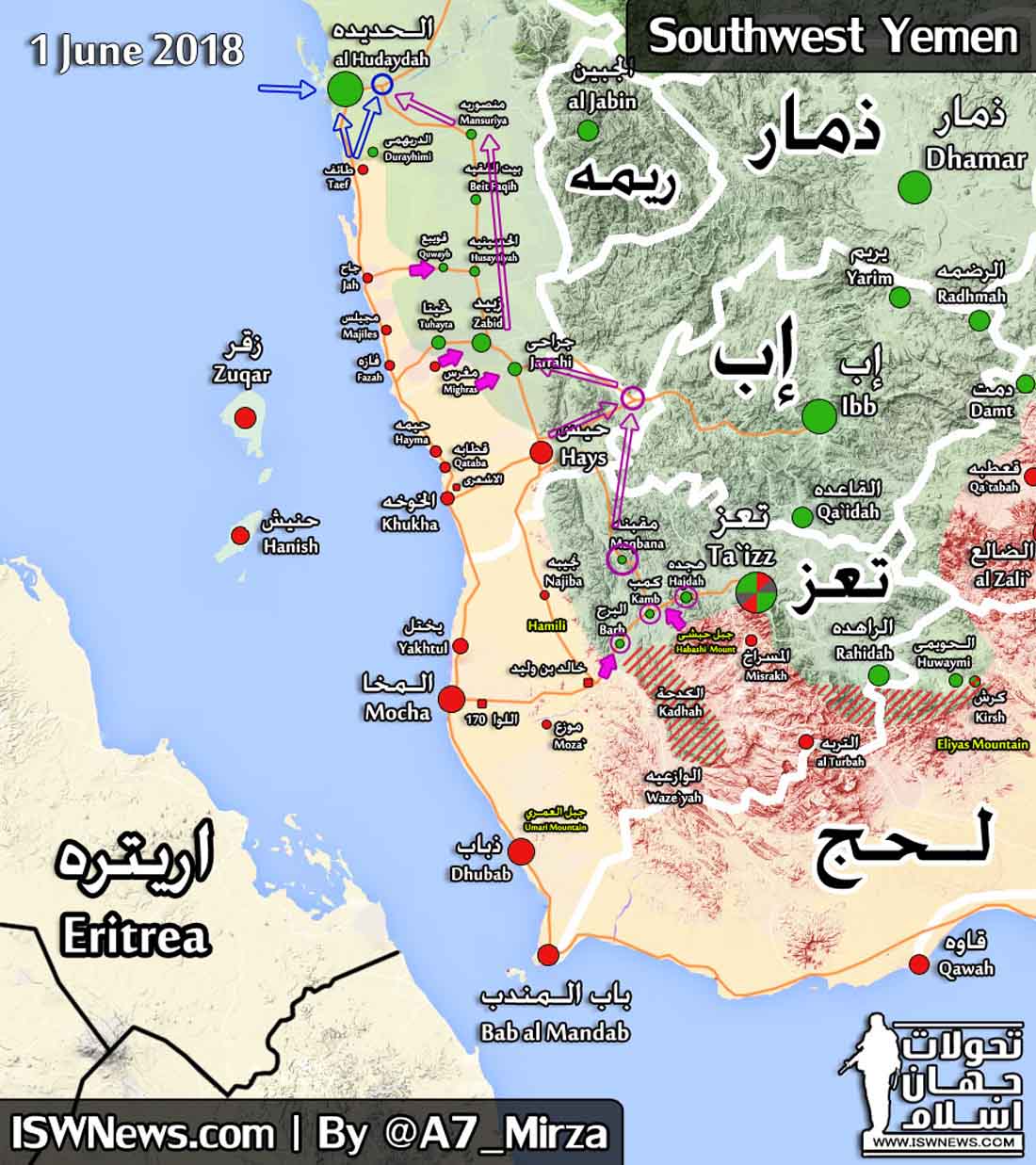 Al Hudaydah operation with leadership of UAE in western shore and with implementation of three groups (militia led by Tariq Saleh, Southern forces) on the land and air, naval and intelligence supports of Saudi Coalition is continuing.

As we are witnessing in the last several years, taking over “Bab al Mandab-Dhubab-Mocha-Khukha-Hays” was a slow motion which Saudi coalition is doing on western shore of Yemen and now by attacking south of al Hudaydah, it begins a new phase.

After previous articles (Monthly Report on Yemen’s developments 29 May 2018), the line of position of Saudi coalition in western shore is weak and vulnerable due to the narrow width and AnsarAllah’s attacks threaten it. (As this axis was under severe fire by AnsarAllah in recent days.)

Therefore we discuss this operation from two possible plans:

Possible targets (blue arrows): The first step is to capture Durayhimi, the secons is to attack al Hudaydah airport and at the same time the eastern road of al Hudaydah until the triple junction of “Mansuriah-Murawi`ah-al Hudaydah”, the third is to attack from land, sea and air to the city.

Possible targets (pink arrows): The first is to advance till Muqbana which provides defeating AnsarAllah’s defense line in Hajdah until Kamb and Barah, the second step is to attack to Jarahi and Tuhayta at the same time, the third is to coalesce fronts in Zabid and Husayniyah and then  Beit Faqih and Mansuriyah and the fourth is to cut the eastern road of al Hudaydah and attacking the city from all directions.

At the moment, the first point of view due to time limit for the Coalition and the overall situation (from AnsarAllah persistence and …) is more likely to occur than the second point of view. Indeed the Alliance Operation room knows that defeating AnsarAllah defense in south of al Hudaydah is not easy so they need to open more fronts such as Ta’izz and north of al Hudaydah and etc.

Moreover the coastal axis of the Coalition is not a reliable and safe for attacking to al Hudaydah and relying on it makes the Coalition to give casualties. From this point of view the second plan is considerable.

Al Hudaydah has a great importance at the moment; For AnsarAllah it is the biggest base to reach the coast and for the Coalition is an edge of the triangle of (cutting AnsarAllah’s connection to sea, occupying Saada and Sanaa) to reach victory, and also a critical importance for Emirates since they believe al Hudaydah is a point to reach Sanaa and have a more quota in Yemen’s future.

Considering the recent talk of Yemeni Army Spokesperson regarding threatening Emirates and having enough power to reclaim lost lands such as Khukhah and Hays, anticipation of the reclaiming operation is not likely; but it is easy to predict teasing and missile attacks to western shores of Yemen and even Emirates.

In the case of breaking the defense line in south of al Hudaydah, teasing and missile attacks and finally urban war is the sole trick of AnsarAllah to face and ground the Coalition.

AnsarAllah’s overall strategy in al Hudaydah and in all fronts of Yemen is the same method which results in prolonged war and exhausting the Coalition; if occurs, the Saudi Coalition might retreats from those regions or at least prepares the situation for AnsarAllah and Yemeni Army to reclaim the lost lands.