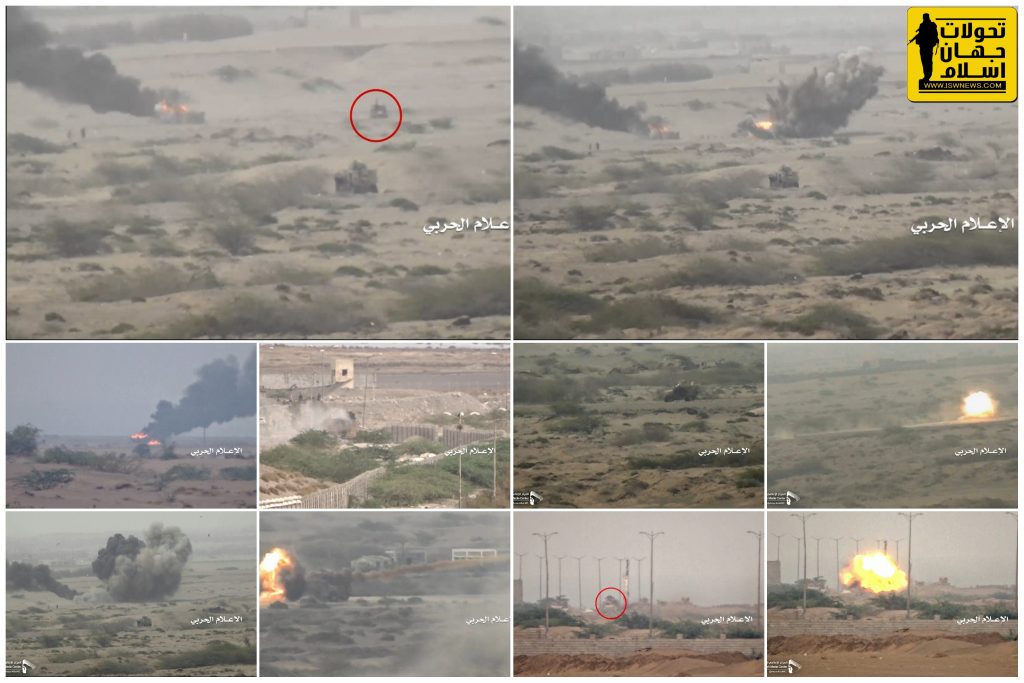 “Images: Destroying the armored vehicles of the Coalition and repelling the attacks to Hudaydah airport by Ansarallah movement”

Today’s clashes in past days lines, namely south and east of airfield, sporadically continues, and also west side (main building of airfield), north side and airdefense base is under control of Ansarallah.
(After that Ansarallah’s officals and spokeman denied the fall of Al-Hudayda airfield, now videos and pictures that are out, shows us the true nature of these clashes)

Today attacks, by UAE-Backed forces with the aim of advancing in west side of airfield ( airfield’s square and alKornish region ), is stopped and so the coalition forces retreated to Al-Manzar.

Also there is no changes for situation of other fronts in southern Al-Hudayda (Ad-Durayhimi and Al-Jah). And because of constant attacks by Ansarallah, coastal road is still blocked.
Also an UAE drone was downed in airfield’s sky by Ansarallah (picture down below)

3. A coalition drone was downed in Al-Dhaher District, north of Saada Governorate.

I will continue negotiating with all parties, so that i stop the war in Al-Hudayda from continuation. My priority is to stop the war in Al-Hudayda and going back to political negotiations. The constructive participation of Ansarallah’s leader in Sana’a inspired me, and i am waiting for my meetings with President (resigned) Mansour Hadi and his government. I repeat the UN’s obligation for attaining a political agreement in Yemen. I welcome the obligation and parties tendency for joining the internal political process of Yemen (which UN Facilitates it).

Khark helicopter carrier after 4 years of repair, alongside with Iran’s 54th Naval Squadron of IRI Navy, was sent to the region in order to keep the security of open waters of Aden Gulf, northern Indian ocean, and Bab-el-Mandeb strait.

(With regards to nature of this missions, despite what is being said in western medias, it doesn’t seem that Iran has any plan for military intervention in Yemen. However, this action is not without influence security of Iranian ships which are under threats of Saudi-led coalition in these regions.)