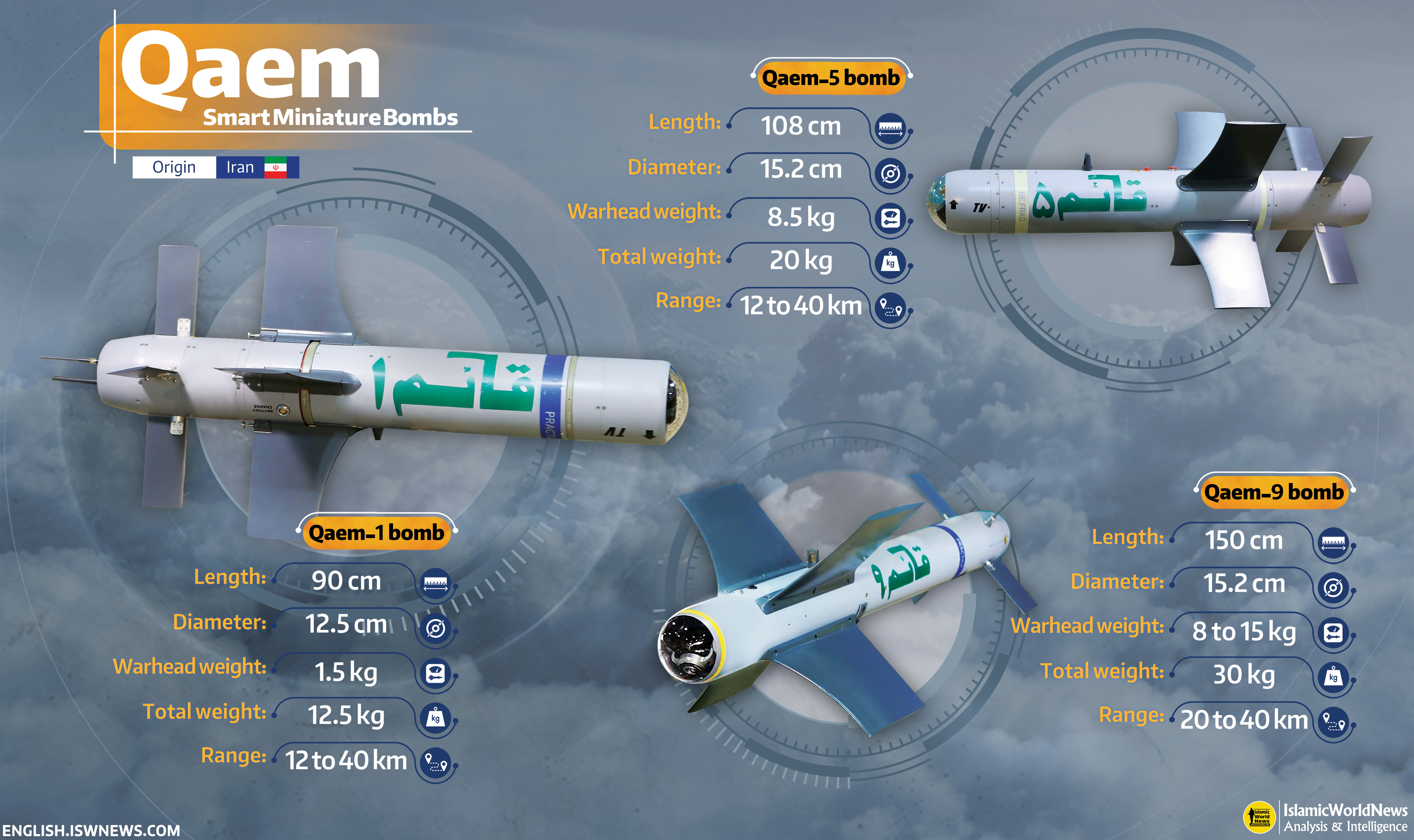 Qaem 1, 5 and 9 bombs were all unveiled during a ceremony in August 6, 2019 in Tehran. According to Amir Hatami, Former Minister of Defense and Armed Forces Logistics of Iran, at the unveiling ceremony of Qaem bombs, this product was jointly produced by the two Organizations of Defense Industries and Iran Electronics Industries. Amir Hatami stated that the minimum operational height of these bombs is 4 to 10 thousand feet (1219 to 3048 meters) and its range is 12 to 40 kilometers, and the ability to install different penetrating and shrapnel warheads with different ranges and various destructive power is also available in these bombs.

It should be noted that the “minimum operational height” of the Qaem bomb means that if we drop the bombs below this height (below 1219 meters), they will not be able to glide and will quickly fall towards the targets.

But in another place, Brigadier General Shahrokh Shahram, the CEO of Iran Electronics Industries, states that the range of Qaem bombs is 20 to 40 kilometers. Due to the contradiction between the words of Amir Hatami and Shahrokh Shahram, the exact range of these bombs is in an aura of uncertainty. Also, unfortunately, the range of this series of bombs has never been officially announced in any of the military exhibitions. In the rest of the article, we will try to determine the range of each of the bombs of the Qaem series separately.

Small Diameter Bombs (SDB) are a new type of bombs that have been produced and adopted in the last few years by the military powers like the United States. The U.S. prototypes of this model were heavy bombs and were launched by the fighter jets and from a high altitude. Due to Iran’s need for lighter but practical weapons for its modern drones, Iran was inspired by this type of bombs in making smart bombs, and these efforts finally came to fruition in 2010 with the introduction of the miniature bombs of the Sadid family. Sadid-342 can be considered the first miniature bomb of Iran, which was later developed in the Qaem family.

In the process of producing these bombs, the production of seeker that can be used in all current and future Iranian smart bombs was very important. Therefore, Iran’s Ministry of Defense produced seekers with various guidance methods. Two examples of these seekers named thermal image seekers RU320ST and visible image seekers RU113ST have been displayed, which have been installed and observed on Sadid and Qaem families.

Although there is no information available about the history and order of production of Qaem bombs, but based on the available data, the category can be considered as follows:

At the time of the unveiling of these bombs, Amir Hatami announced the range of the Qaem family from 12 to 40 kilometers. Looking carefully at the front and rear wings of Qaem-5, we will notice the larger dimensions and aerodynamic shape of the Qaem-5 compared to the Sadid family of bombs. Probably, the range of Qaem-5 is greater than that of Sadid 342 and 345 because it has less weight and more wing area, which will increase the lift and decrease the drag and finally increase its range. Therefore, based on the mentioned facts, Qaem-5 range can be considered 12 km if released from a height of 5 km. Qaem-5 bomb has the possibility of being installed on the fighter jet, and if it is released from a high altitude, a range of up to 20 kilometers can be considered for it.

The seekers used in Qaem 5 are visual/optical (TV), thermal (IR), laser and a combination of optical and laser. The use of all kinds of seekers in Qaem 5 allows operations to be carried out with great accuracy and in all weather conditions.

A variant of the Qaem-5 has also been seen, which has an infrared seeker and a proximity fuse (probably of the laser type), which is remarkable in its own right. The reason for using infrared is probably to reduce the cost of construction; But it will be less accurate. However, the use of a proximity fuse next to the infrared seeker compensates this defect to some extent.

Unknown variant of Qaem-5:
A variant of Qaem-5 was showcased in the exhibition of the achievements of self-sufficient Jihad of the Iranian Navy in December 14, 2021. The length and width of the wings had increased noticeably. This increases the wing area and ultimately increases the range. And also there is the possibility of increasing the (warhead) weight without increasing the range.

This type of Qaem-5 bomb was seen under the wing of Fotros reconnaissance and combat drone in the Iranian Army’s Strategic UAV Base 313, which strengthens the possibility of its operational nature. Therefore, we can expect to see this bomb on other combat drones of the Iranian Armed Forces in the near future. A capability that will significantly increase the offensive power of Iranian drones.

Qaem-5 smart bomb specifications:
Length: 108 cm
Diameter: 15.2 cm
Seeker type: Visible (TV), thermal (IR), laser (L), a combination of optical and laser
Type of warhead: Fragmentation
Fuse type: programmable and timed
Warhead weight: 8.5 kg
Total weight of the bomb: 20 kg
Range: 12 to 20 km based on the release height (in the unknown variant of Qaem-5, its range can be increased up to 40 km)

Qaem-1 bomb:
The Qaem-1 smart bomb can be considered as the second member of the Qaem bomb family because the Qaem-5 was created along the lines of Sadid’s changes and the Qaem-1 was created due to the need for a light bomb to be carried by light drones. Iran uses a large number of light drones, such as Ababil 3 and 4. Because these drones do not have much power to carry ammunition; The Qaem-1 light and smart bomb can properly perform its duty on Iranian light drones in line with the doctrine of “one shot for each target”.

The specifications of Qaem-1 bomb have also been displayed in the Baghdad defense exhibition under the brand name BS12.5 The weight of this bomb is 12.5 kg, its length is 90 cm and its diameter is 12.5 cm.

Qaem-1 also uses visual or optical (TV), thermal (IR), laser, a combination of optical and laser seekers. But Qaem-1, in the warhead type, has been introduced with more variety. So far, warheads with fragmentation, incendiary, direct impact (kinetic energy) have been introduced for this bomb. Of course, it is important to mention that it is possible to use these warheads for the entire Qaem family. A programmable and timed fuse allows the bomb to detonate at a certain distance from the ground or at a specific height, increasing the effect of the warhead on targets. The total weight of Qaem-1 bomb is 12.5 kg and its warhead is 1.5 kg.
The range of this bomb has not been announced like other members of the Qaem family. Qaem-1 with its light weight and small diameter and wings that are exactly similar to Qaem-5 can have a significant range. The Qaem-1 appears to have a slightly higher wing-to-body ratio than the Qaem-5. But it will probably have a range equivalent to Qaem-5, i.e. 12 km if released from a height of 5 km and a range of 20 km if released from a high altitude. The minimum release height for this bomb is 4,000 feet or 1,219 meters.

Qaem-9 bomb:
Qaem series bombs have been widely seen on all kinds of Iranian drones, but so far no pictures of Qaem-9 bomb installation have been seen. The Qaem-9 bomb has not been exhibited and very few pictures are available. According to the statements of the former Minister of Defense of Iran at the time of the unveiling of the Qaem bombs that these bombs can be used on drones and fighter jets and since the Qaem-9 bomb has not been seen on drones, we can have the impression that Qaem-9 is specially developed for fighter jets. Of course, it should be noted that it is definitely possible to install Qaem-9 bombs on drones.
Although the dimensions of Qaem-9 are not available, it obviously uses the same diameter as Qaem-5, i.e. 152 mm. Considering that the wing location in this model has changed and its length and weight have also undergone changes, the center of gravity of Qaem-9 has definitely changed compared to Qaem-5. By examining the available images, a significant increase in the length of the bomb can be seen. According to the investigations, the length of this bomb should be around 150 cm. Also, in this bomb, it is possible to use all kinds of warheads and seekers used in Qaeim 1 and 5.
Next is to determine the weight of the bomb. For this purpose, due to the increase in the length of the Qaem-9 bomb and based on the Qaem-5 bomb, we increase the weight of the Qaem-5 bomb by approximately 50% and consider the weight of 30 kg for the Qaem-9.
Considering the dimensions of the Qaem-9 bomb, this bomb is a very favorable option for using a thermobaric warhead. Because this type of warhead has more weight and requires more space.
Regarding the range, we return to the words of Amir Hatami and Brig. Gen. Shahram. The dimensions and length of the front and rear wings have been increased for the Qaem-9, which improves its aerodynamic characteristics and increases its range. The range of this bomb can be estimated to be 20 km if released from a height of 5 km and 40 km if released from a fighter, i.e. a height of more than 8 km. It is also worth noting that Qaem-9 bombs cannot be dropped from a height of less than 3 kilometers.

Unknown variant of Qaem family:
A variant of Qaem smart bomb was displayed in the exhibition of achievements of the self-sufficient jihad organization of the Iranian Navy in December 14, 2021, which has much larger dimensions than other members of Qaem family. It seems that the diameter of this bomb is the same as other bombs, but its length has increased. The dimensions of the wings have also increased significantly. Definitely, this unknown bomb has more weight and range, but no accurate information can be obtained from it. This bomb may be designed to be dropped from large drones or fighter jets. It is also possible that this bomb was chosen instead of Qaem-9 due to its similarity with the main structure of the Qaem-5 bomb, which has the highest production rate in the Qaim family, and has the same specifications. This issue can be due to reducing the costs of bomb production and preventing the creation of new infrastructure in the new production chain. With no change in the diameter of the bomb, all the seekers used in Qaem-5 can be used on this variant as well.

Qaem free fall bomb or laziness in installing wings?!
A wingless bomb has been seen in footage released about the Mojaher-6 drone in Ethiopia, which is close in size to the Qaem-5. The lack of wings makes this bomb unguided and similar to a free-fall bomb. Considering the absence of any tracking system in the front part of the bomb, there is a possibility that this bomb was made according to Ethiopia’s needs in a way to be cheap so that it can be widely used.
Another possibility is that the bomb seen in the picture is one of the three bombs of the Qaem family, and it was mounted on Mohajer-6 without wings and for promotional photography. In the meantime, due to haste or any other issue, guidance wings have not been installed on these bombs.