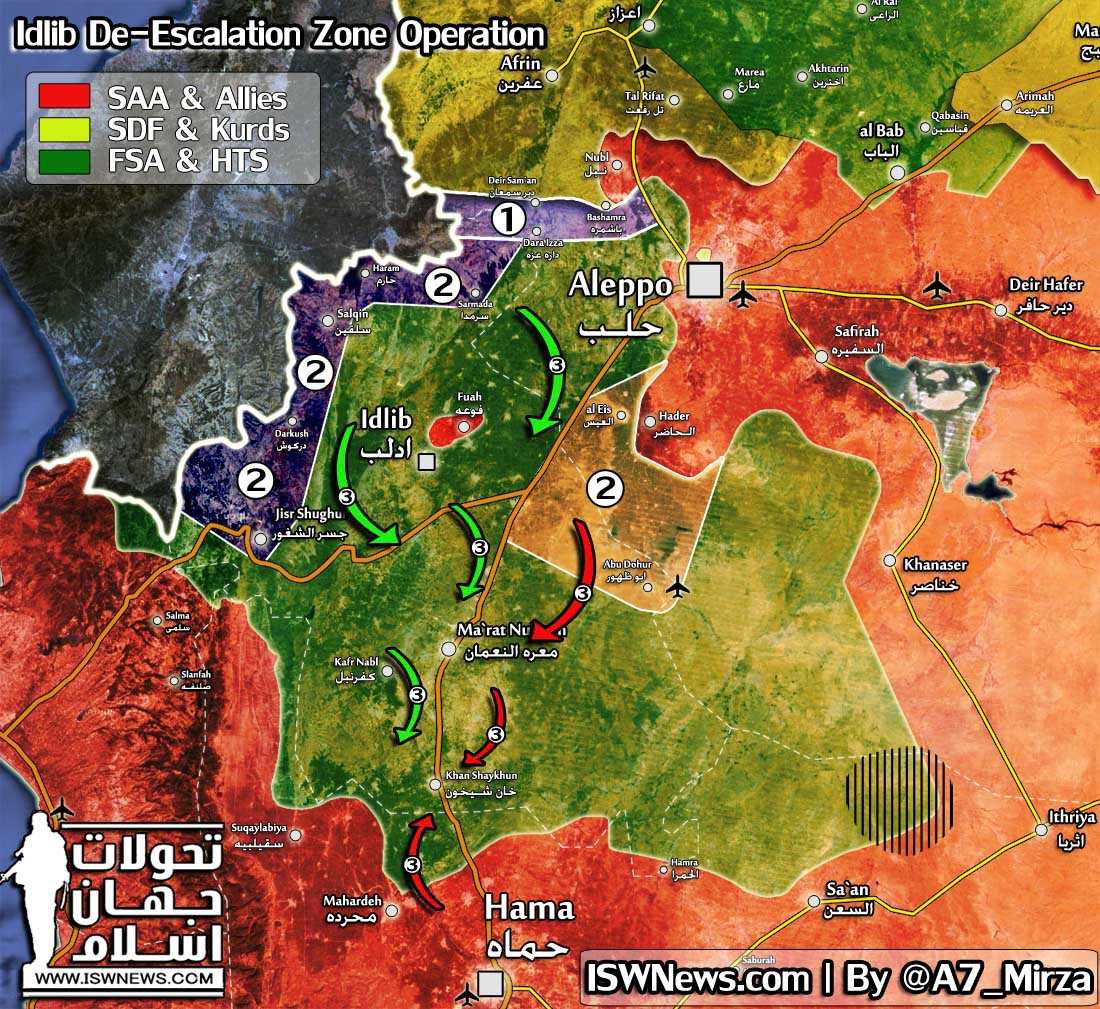 The following notes are based on the latest reliable field information and future contingencies. Reading this note will give you a good insight about the upcoming events in the province of Idlib.

After announcing the start of the operation in Idlib province by Erdogan on October 7th and executing another part of the Astana agreement known as “De-Escalation Zone Deal” , till now about 200 military equipment including military vehicles and personnel along with the Turkish army entered the province of Idlib.

Turkey’s entry into the province of Idlib within the framework of the Astana peace agreement can be investigated.

Apart from mentioned objectives of entering the province of Idlib by the Turkey, in the first phase, this event is included of the presence of Turkish troops in western side of Aleppo province along the Darat Izza, Jabal Sheikh Barakat, Dir al-Sam’an and the frontlines between militants(Such as FSA, HTS, etc) and the Kurds(SDF, YPG, etc) throughout the southern front of Afrin, from Bashamrah to Jandris.

It should be noted that the Turkish troops will not cross the contact line of Afrin and by being in these areas, they will play as a buffer zone.

The purpose of this move is to close all militants`s supplying routes (weapons and personnel) from Turkey to Syria and vice versa.

So far, there will not be any serious tension certainly.

The final goal is to open the Aleppo-Hamah highway.

In the next stage and third phase Turkish troops or Turkish backed forces will be distributed in areas along the highways like Saraqeb, Khan Sheikhun, Ariha, Murek, and they will enter the northern suburbs of Hamah from the north.

From the southern side, the Syrian Army and Resistance forces as well as the Russian forces on the outskirts of Hama will move along the highway, and ultimately the Aleppo-Hamah highway will be fully liberated and active.

Therefore, all that mentioned will be carried out in three general stages:

According to what is known, the city of Idlib will remain under the control of Tahrir al-Sham (HTS)

The details of this stage can include many options that domestic (national) reconciliation is one of them.

It should be noted that the issues mentioned are based on field evidence and the parties’ plans(all sides), and given the dangerous nature of Erdogan and his sudden turns, there is a possible new scenarios.

There is also no specific talk about the state of Fu`a and Kafraya it is not clear what kind of plans were intended for these settlements.

Also, the situation of important areas such as al-Rashidin and al-Zahra in west of the city of Aleppo is unclear, and it is likely that these areas will also join the national reconciliations.