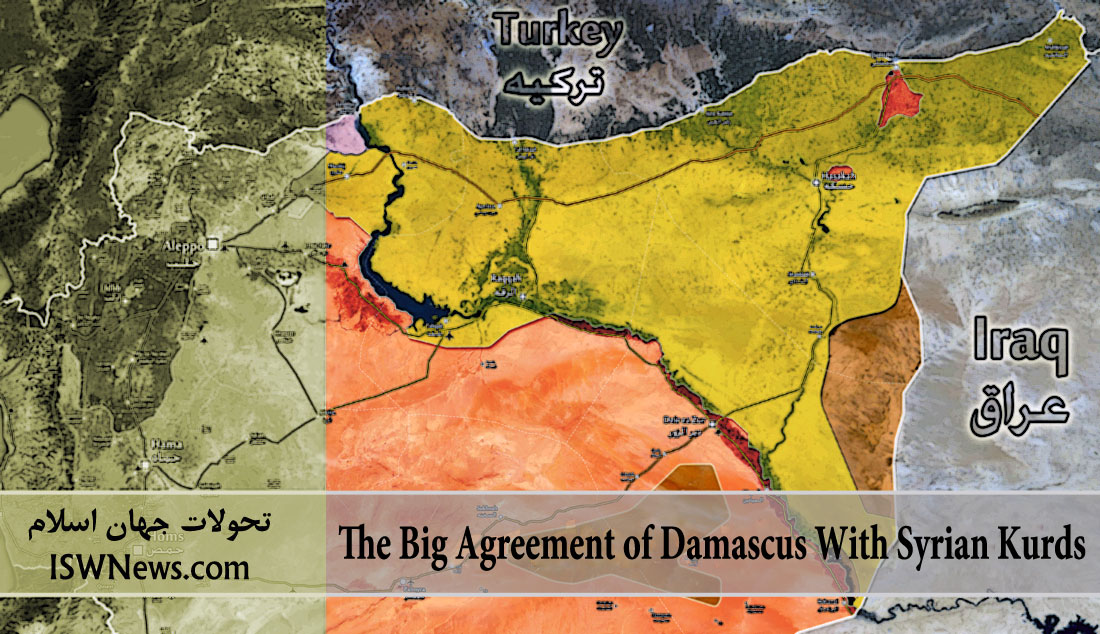 But the Kurds, made a grave mistake and with trusting the Americans completely, they refused the offer which was given to them by Syrian government & Russia.

The result was as expected, they were defeated completely and swiftly. and Afrin region went under the occupation of Turkey.

When they were refusing the offer maybe the Kurds were thinking to themselves that the Americans would stop the military operation of Turkey against Afrin. However, after a few meetings between the Turks and Americans, The Kurds witnessed Turkey’s warplanes above their cities, witnessed a vast population of Kurds being displaced from their homeland.

Now we’ve heard that the Kurds reached to an agreement with Syrian government, that not so long ago they refused. an agreement with more benefits for Damascus, after they lost control over Afrin and Manbij and their cities went under the control of Turkey.

But what has changed for the Kurds that they accept to have an agreement with Damascus?

Naturally the occupation of Afrin by Turkish Army was successful, when America & Turkey made a deal, and also the Kurds themselves gave their fate to Washington. And within a few months, the Americans made a deal over the important region of Manbij, and the Turkish patrols entered this region.

And now, with the coming Putin-Trump meeting, and the consultation about military operation in southern Syria, Daraa, there are news on new agreements between Russia & America about Syria, which can be devastating for Kurds.

Although the details about this agreement is not certain, However, one of America’s points is that they will pull back their troops from al-Tanf and its temporary military bases in Kurdish populated regions.

The Americans are seeing that Turkey is fully against Kurds having control over regions which are in its borders, The Americans saw the intense responses of Iraq and its army against separatist of “Iraqi Kurdistan”, and also regions like Tanf in Syria, isn’t a strong and permanent place for them to stay, Morever they see that even Arab populated regions that are under the control of Kurds, are showing more tendency, day by day, towards Syrian government, including Raqqah, Tabqah, and even southern Hasakah and DeirEzzor.

Add these up to political changes in America and this point that the military presence of America in Syria, under the name of “International coalition”, is considered & justified as a military operation against ISIL, and it is unknown that this justification continues after “Operation of Eastern Euphrates” against ISIL.

All these factors & constant pressure of Turkey, leaves the future of America’s support for the Kurds, very vague, and force them to have an agreement with Syrian government.

The agreement of Kurds with Syrian government:

Although this agreement is not final yet, but after a few rounds of negotiations in Damascus & Qamishli between Syrian government and DFNS (Democratic Federation of Northern Syria), now we are witnessing visits that are made by Damascus delegates in Raqqa province, which shows that negotiations are serious. Before this, military forces of America in Raqqa & DeirEzzor wouldn’t let this happen.

What is published as probable details about this agreement, are as follows:

1. Entrance of Syrian Army in Hasakah province and supporting Syria’s border with Iraq, and Trukey.
This includes SAA’s branches for military recruitment, and joint checkpoints with Kurd forces.

3. Rising the flag of Syrian government in all the regions, bringing down all the Kurdish flags and symbols, including “Abdullah Öcalan” pictures.

6. Introducing a Kurdish person as minister of oil.

It is obvious that these conditions is advantageous to Syrian government, and it can restore the full control over Syria, by Damascus; we shall see that how many of these conditions will be implemented, specially that the Americans will be the main obstacle for this agreement.