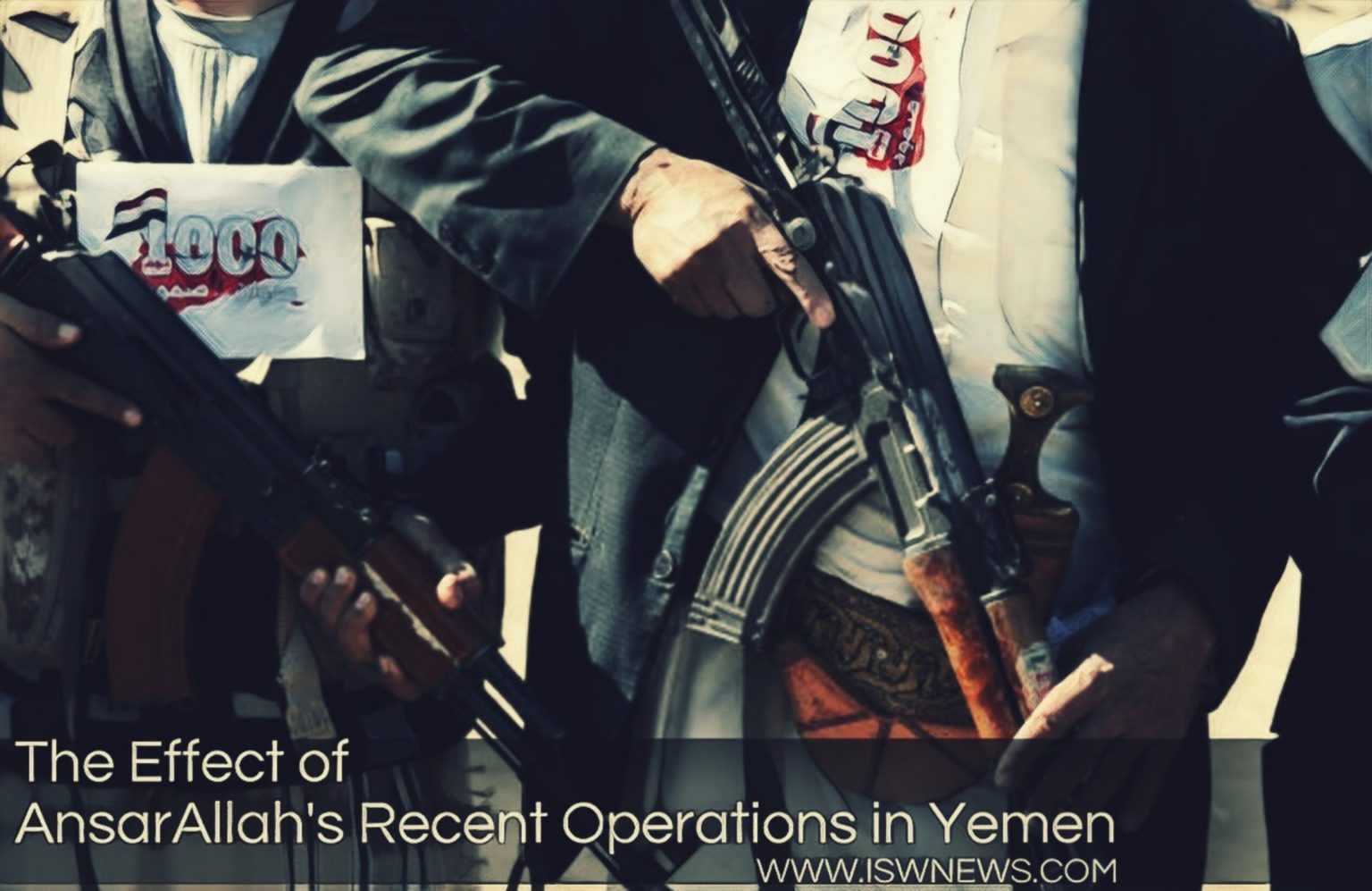 1. Summary of Ansar Allah’s operation in recent months:
AnsarAllah’s operation started from Nihm district in northeast of Sanaa and continued in west of Marib and after severe engagement in recent days resulted in liberation of districts al-Khalaq and al-Ghayl, and capital of al Jawf, al-Hazm.
Goals of this operation were primarily lowering the risk of fall of the capital and secondly answering the violation of the agreement by Mansoor Hadi’s resigned government. Also Ansar Allah is trying to make peace with the resigned government. Although resigned government is facing inside discords but still united to fight Ansar Allah and no peace.
In general, Ansar Allah’s control on al-Hazm will result in overall control on al Jawf and challenges Saudi coalition positions in Marib from north.
Recently, the news of Ansar Allah negotiating with tribes of Marib was released which shows Ansar Allah has plan for Marib.

Some points regarding Ansar Allah’s operation in al Jawf:
– Several joint drone-missile operations in Saudi soil (Najran and Jizan) and against Saudi coalition and Mansoor Hadi’s forces in cities al-Hazm and Marib.
– One of these missile operations was so accurate that killed Saudi coalition commanders who were deployed to al-Hazm to help keeping Amin al-Akimi, caused chaos in their forces. Maybe the main reason of Saudi coalition retreat from al-Hazm was killing of their top commanders.
– Ansar Allah was talking with tribes of areas Khalaq, Ghayl and Hazm at the same time operating there, which was one of the keys to victory to have support of the tribes. Shooting down Saudi coalition warbird followed by Saudi coalition air raid to Maslub, which resulted in martyrdom of 35 women and children, was another reason for tribes to support Ansar Allah.

It can be predicted that after recent victories in fronts Nihm, west of Marib and capital of al Jawf, Ansar Allah will focus on main base of supporters of Islah party and Mansoor Hadi’s resigned government, which is Marib city. As mentioned previously, taking over Marib is difficult and requires prerequisites such as claiming Hazm and heavy military preparation.

Mansoor Hadi’s forces cannot confront Ansar Allah alone and it has been proven before. To endure in Yemen they need coalition with a movement such as Southerners, Ansar Allah, Al Qaeda or ISIS. Southerners want dividing Yemen, al Qaeda and ISIS do not respect Yemen’s sovereignty at all and want the whole Arabic peninsula. Therefore their best ally would be Ansar Allah but their dependence on Saudi coalition is their biggest hindrance and eastern tribes are also unhappy with Saudi exploitation in their lands.
Therefore claiming Marib can end their time unless Ansar Allah has another plan.

4. How is al-Qaeda’s situation after their leader was assassinated?
Assassinating leader of al-Qaeda in Yemen, Qasesm al-Raymi by USA can have two reasons: 1. To save al-Qaeda from attrition in Yemen and 2. Fall of al-Qaeda power in Yemen.
Al-Qaeda’s talent in Yemen weakened by the UAE’s formation of the Security Belt forces (Hizam al-Amni) and the unity of some pro-al-Qaeda tribes with the mansour Hadi government, and the United States is seeking to change the structure of the group in Yemen by killing al-Raymi. Now its unclear that this change is intended to strengthen or weaken them. But it appears to have been used to inject al-Qaeda forces into Mansour Hadi’s army to counter Ansar Allah.