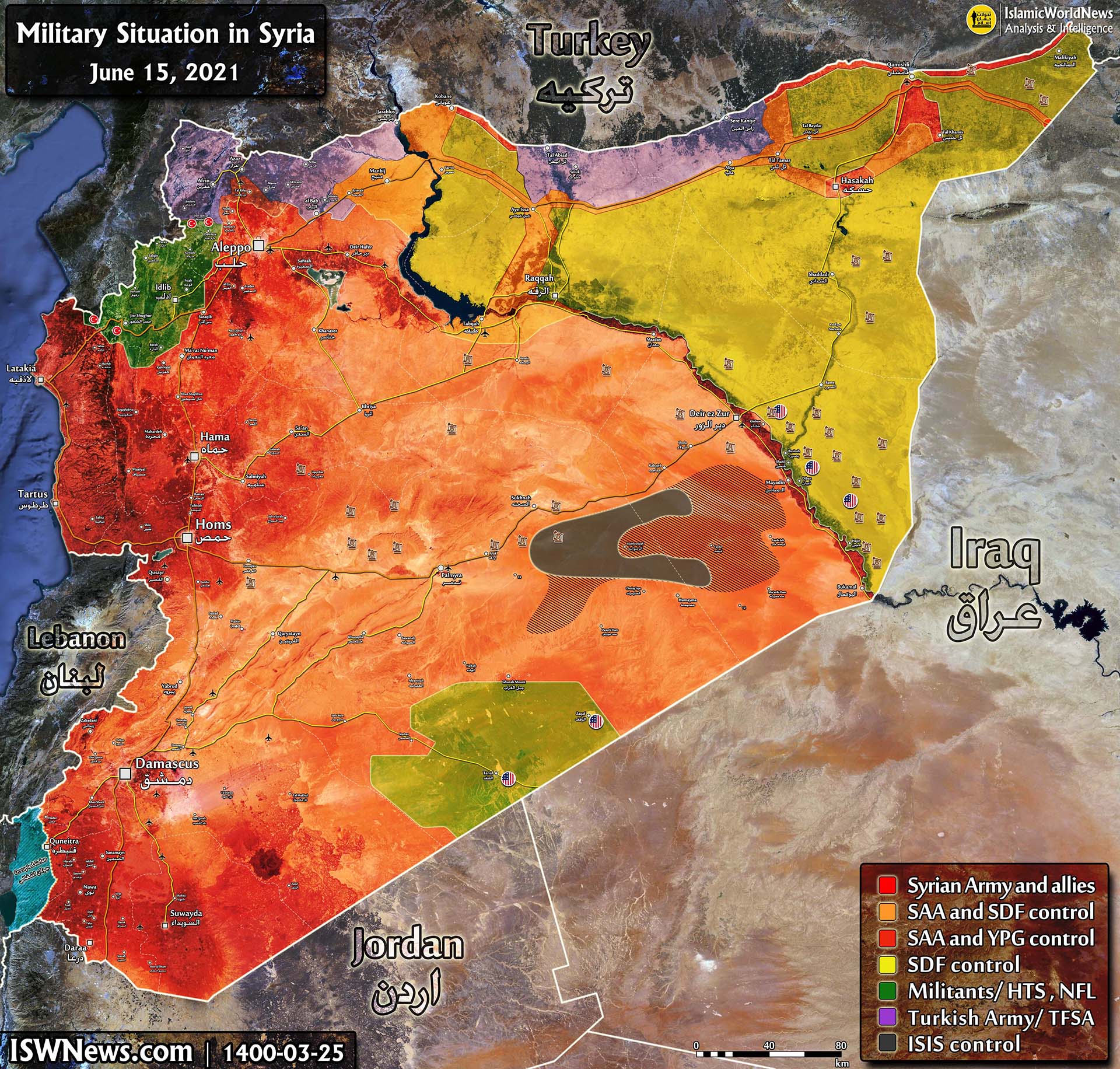 East of Syria:
Recent operations by the Syrian army and Russian warplanes in the desert areas of Deir Ezzor and Homs provinces led to the destruction of many of ISIS hideouts in these areas. However, ISIS guerrilla operations, including ambushes and bombings against Syrian Army forces and allies in the eastern deserts of Syria, have severely affected the security of these areas. ISIS attacks have led to the martyrdom of a number of Syrian Army forces and Iranian advisers on several occasions. As summer approaches, ISIS appears to be stepping up its attacks in the eastern deserts of Syria. Thus, securing the roads and thwarting ISIS attacks remains the main goal of the Syrian army in the east of Syria. According to the latest information, the Syrian army has sent more troops to the eastern deserts of Syria, and the possibility of launching a large-scale clearing operation is not far off.

Another major incident in the Idlib region is the killing of a number of Tahrir al-Sham commanders by Russia. Given Russia’s recent strike on Tahrir al-Sham in southern Idlib and the killing of a number of its top commanders, tensions are likely to rise and there will be a possibility of a limited or widespread ground clashes on the fronts in Idlib and Aleppo provinces. Currently, the exchange of artillery attacks on the conflict lines in Idlib and Aleppo provinces has intensified, and most of this exchange of fire takes place in the areas of Zawiyah mountain and al-Arbaeen mountain.

Northeast of Syria:
The most important developments in northeastern Syria are related to the clashes between the Asayish forces and the Syrian army in the city of Qamishli, which finally ended after a few days of clashes and withdrawal of the Syrian army from most of al-Tai neighborhood. Clashes began on April 20, when one of the Asayish commanders, Khalid Haji was killed in an exchange of fire between Asayish and NDF at checkpoint in the city of Qamishli. After this incident, the Asayish forces attacked al-Tai neighborhood and took control of parts of this neighborhood.

Clashes between SDF and Turkish-backed militants around the towns of Ain Issa and Tal Tamar are another major incident in recent months in northeastern Syria. Despite a ceasefire agreement in these areas and the creation of a safe zone, clashes and tensions between the Turkish-backed militants and SDF have continued over the past year in northeastern Syria. Over the past year, Turkish-backed militants have repeatedly attempted to advance and seize the city of Ain Issa, each time being stopped by the SDF. In the last case of these conflicts, with the serious entry of Russia and the agreement with Turkey, the intensity of tensions in the region was reduced. However, the situation in the safe zone is still very fragile and there is a possibility of widespread clashes at any moment.

US, Russian and Turkish military patrols are also continuing in the northeast of Syria.

South of Syria:
Terrorist operations in southern Syria remain strong, and this has become a major problem. In the past year, a significant number of ex-rebels who joined the process of national reconciliation and eventually joined the Syrian army or laid down their arms have been assassinated by unknown gunmen.
The continuation of assassinations in Daraa province, which recently led to the assassination of five mayors, the attack on the polling station in the presidential election, the Syrian army checkpoint and several ex-rebel commanders, indicates the unstable security situation in southern Syria.