Details: What Is Happening in Kitaf Axis in North of Saadah? How Was AnsarAllah’s Great Operation in This Axis? + Map 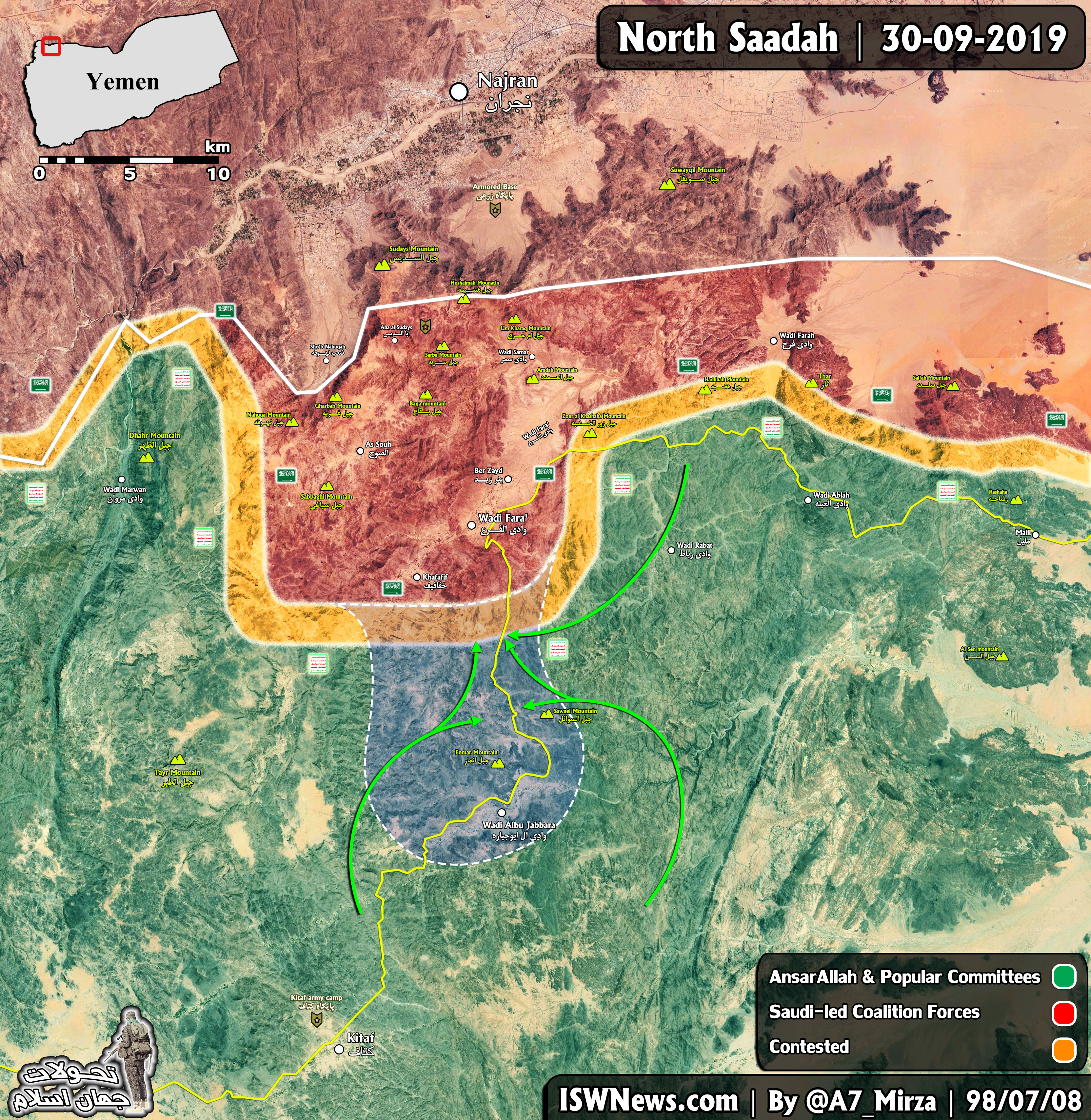 ISWNews Analysis Group: According to Yemeni Armed Forces spokesperson, AnsarAllah and popular committees could liberate 350 km2 of north of Saadah province from enemy in the operation ‘Nasr Min Allah'(victory from God) in Kitaf axis.

Kitaf area in west of Saadah province and Saadah city is one of the main defense lines of Saadah city. Due to the strategic importance of Kitaf, Saudi strived hard to reach Kitaf by several operations in recent months. Although Saudi advances in this axis were slow due to Ansar Allah’s rattling resistance but eventually could reach a few km from Kitaf by capturing ‘Wadi Al Abu Jabbarah’.

Later in the operation, more troops and brigades of Saudi Army soldiers and mercenaries were dispatched to the area to advance more in north of Kitaf to get out of Wadi Al Abu Jabbarah area, in which they were stock for a while, under aerial and more troops supports.

But unlike Saudi’s predictions, things did not go as planned!

In general several brigades such as Al Wahda Brigades, Tohid Brigades, Al Tahrir Brigades, Al Fatah Brigades and Al Qadesiyah Brigade of Mansour Hadi’s and Saudi’s troops are present in the north of Saadah. Al Fatah and Al Qadesiyah brigades are the ones which were preparing to perform new operation toward north of Kitaf by gathering in Wadi Al Abu Jabbarah. Unlike Saudi’s expectations, Ansar Allah and popular committees forces were faster and before Saudi coalition’s grand operation toward Kitaf, they attacked them in two main directions presented by green arrows on the map, blocked the logistic line of Saudi coalition’s forces present in Wadi Al Abu Jabbarah and besieged them.
This incident happened almost 40 days ago and was covered by ‘ISWNews’.

As mentioned yesterday by the spokesperson of Yemeni Armed Forces, in the first 72 hours of AnsarAllah’s operation, almost three brigades of Saudi coalition were besieged in Wadi Al Abu Jabbarah. After the siege, engagements intensified and more brigades and troops conveyed to Wadi Al Abu Jabbarah, even 2 Saudi brigades were dispatched to break the siege.

But due to AnsarAllah’s good tactic in implementing the operation and strong participation of AnsarAllah’s drone and missile units, Saudi coalition attacks to breaking the siege failed. According to Yemeni Armed Forces spokesperson, their air defense helped the operation a lot by keeping Apaches away from the area.

Most probably what the spokesperson meant by air defense system is what was unveiled recently and due to their success in al Hudaydah shores conflict, they are used in this axis too and limited Apache’s air support of Saudi coalition.

– Regarding the results of operation ‘Nasr Min Allah'(victory from God) we can count complete liberation of Wadi Al Abu Jabbarah and northern parts of it for almost 350 km2. This operation actually destroyed half of what Saudi coalition achieved in the last year in the area. AnsarAllah’s advance is shown by purple on the map.