Latest Map of Fronts in Syria until May 21, 2018; Everything You Need to Know About the Past 97 Days 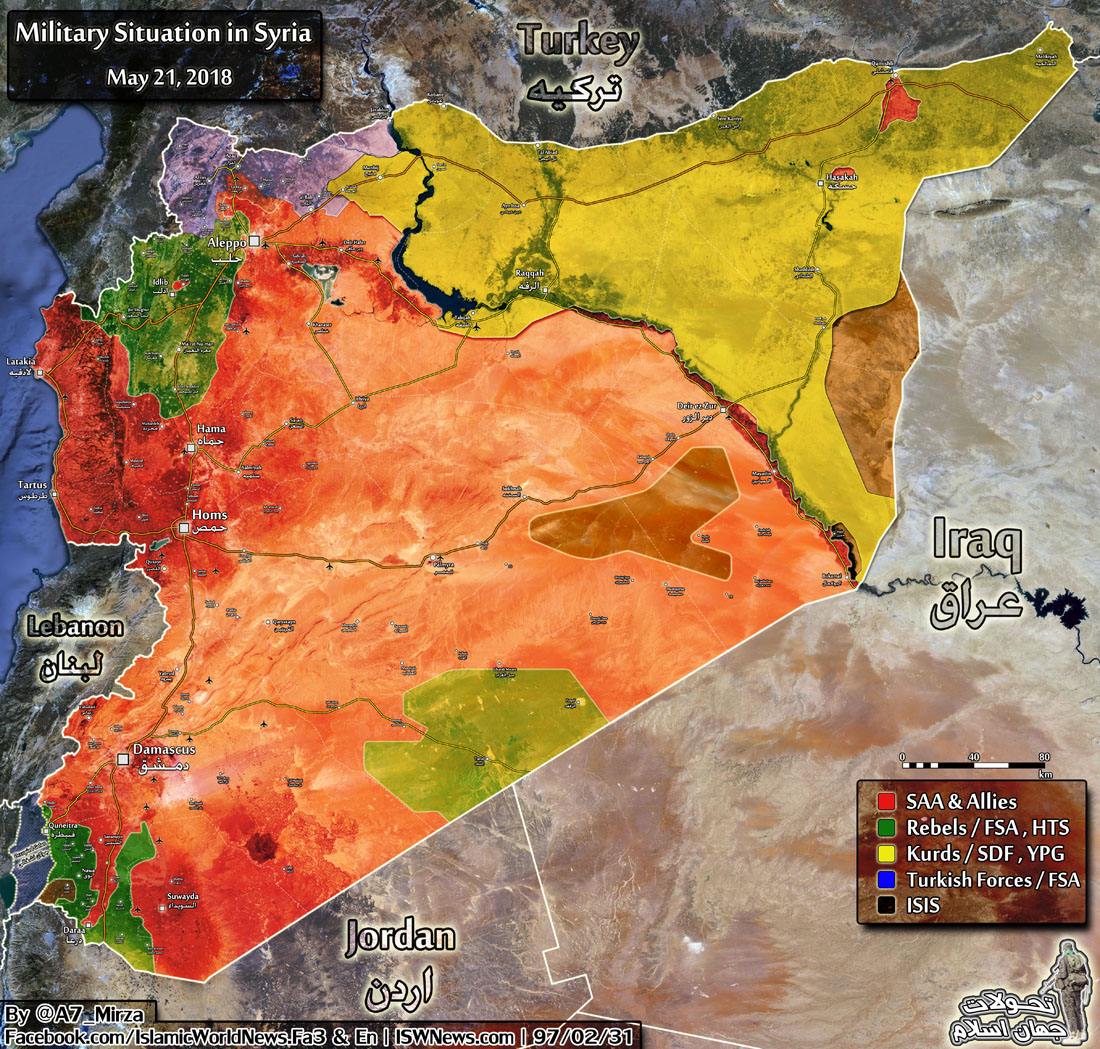 Read in this article; investigation of important changes in battlefield during the last 97 days

Map of 97 days ago for comparison: Here

? The most important changes in the past 97 days are as follows :

Without any doubt, the most important event and change in the northern part of Syria, is the occupation of “Afrin” region by the Turkish Army and Turkish-backed militias which are under the direct command of Turkey.

In the recent writing of us, we mentioned briefly some of the reasons for the fall of “Afrin”; where the Turkey with opportunism and use of factors like, constraining Russia, the stubbornness and lack of discretion & foresight of the Kurds, and the low effect of the resistance axis forces, were successful and managed to kick the Kurds out of the northwest of Syria, and achieved its goals.

With Russia giving an obvious green light to the Turks to fly their airforce freely over the “Afrin”, and the pigheadedness of the Kurdish commanders which were under the command of the United States, it was so clear and natural that the Syrian government and resistance axis forces hands would be tight in this matter. And the military & logistical donations of the resistance axis to “Afrin”, was the best attempt that they could do in that time. These supports in some periods could only decrease the pace of the Turkish army’s advances, nothing more.

If we look back to the situation of Afrin a little while before the Turkey’s aggression, it wouldn’t be so hard to “make sense” of the “Afrin” event. where the operation of SAA was stopped at the gates of “Saraqeb” and the Turkish forces —with the green light that was given by the Russia—facing the resistance of the SAA and resistance axis to some extent, managed to deploy themselves in Al-Eis and its roundabouts.

The Turkish forces, however, managed to capture Afrin city in March 17, 2018, 59 days after the initiation of “Operation Olive Branch”.

Further more, with the militias advancing in southern Afrin, the “Shia” populated towns of Nubl & Al-Zahraa, were under the danger of a new siege, more than ever. Hence the resistance axis and SAA in an effective action, managed to gain control of some of the regions around these towns. With this move, practically, the “Operation Olive Branch” came to an end in northwest of Aleppo.

About some of the most important achievements of Turkey in this operation, we can mention:

The reconnecting of northern parts of Aleppo to Idlib;

Expelling the Kurds(militias) out of northwest of Aleppo;

Obtaining full control over the affairs of the people in the region;

and finally gaining an important military & political leverage in order to use it against Syria in future negotiations.

In east of Syria, and in continuation of advances by US-backed forces, namely SDF, all of the oil wells in eastern part of Euphrates has fallen to the hands of SDF.
Cooporating with Iraqi intelligence & military forces, SDF advanced on borderline and with capturing the Baghoz village, located in north of “border crossing” of al-Qaem-al-Bukamal, the SDF managed to encircle the remaining ISIS forces at eastern Euphrates in two northern & eastern pockets .

Now continues the operation of US-led coalition & SDF against ISIS. The Syrian Democratic Forces, “SDF” are trying to capture “Hajin” village.
The important village of “Hajin” which is said to be the main base for ISIS in east of Syria, is under the heaviest strikes from both air and ground forces.

Also in southern part of “al-Mayadin” town, the SAA and its allies, in a series of intelligence operations, managed to liberate Al-Fayzat and Al-Tammah from ISIS.

“Liberating the entire Damascus and Rif Dimashq Governorate“, is something that in the eyes of the experts and people, was impossible.

Yet the SAA with leaning to its allies & their victory’s outcomes and sacrifices of the warriors over all these years, thrived to achieve it over different battles and negotiations.

On February 25, 2018, The SAA launched the final phase of its operation in eastern Ghouta of Damascus, which in the end led to clearing the eastern Ghouta completely.
Making massive preparations and the vast presence of brigades & forces for this operation, shows the strong willingness of SAA and its allies to end the eastern Ghouta matter.

Unfolding the will of the SAA and its allies, the so called “Internatonal Organizations” in order to make their final efforts to prevent the liberation of eastern Ghouta, have once attempted to make a 30 day ceasefire so that atleast it delays the SAA’s advances in eastern Ghouta.

The Syrian Government, however, not only continued their operation, but also their will & determination strengthened even more.

The speed of this operation was that high, that under the 30 days, about 75% of the eastern Ghouta was liberated and the militants were encircled in three separate region.

Latest Updates on Eastern Ghouta of Damascus; the Ghouta is Divided into Three Parts!

Ultimately, with SAA increasing its pressure, the militants of “Jaysh al-Islam” and other groups, were compelled to accept the “Compromise Agreement” and surrender to SAA.

Hence the militants and those who didn’t want to stay in the region, in different stages and after surrendering their heavy and medium weapons, left eastern Ghouta.

And in April 14, 2018, in an official statement of the armed forces of Syria, the SAA enetered “Duma” —the last den of terrorists in eastern Ghouta— and cleared it.

Therefore after years, the security have once again returned to eastern parts of Damascus.

How the SAA & Allies liberated Eastern Ghouta from Militants in their last operation in the area.

It needs to be mentioned that with the liberation of eastern Ghouta, overall about 175,000 of southern Ghouta’s ihabitants left the region, including 21,000 militias and 40,000 of their families.

After liberation of the eastern Ghouta of Damascus, other options for reconciliation and liberation, such as the siege of eastern Qalamoun, al-Dhumayr and the southern Damascus areas, were put on the government’s agenda.

In the next stage, the militants of al-Dhumayr with accepting the “Compromise” left this region and the SAA aimed its attacks towards eastern Qalamoun regions and by going around of Al-Ruhaybah, the militias have once again came under pressure.

After the siege of “Al-Ruhaybah”, militants of eastern Qalamoun including the most important ones like, “Ahmad Al-Abdo”, “Aswad Al-Sharqia” (backed by United states-Jordan forces), and FSA, were compelled to accept the SAA’s suggested compromise agreement , and like other militias, give up their weapons and go to northern Syria.

After clearing Eastern Qalamoun, the southern Damascus was the last place which were occupied by the militias in Damascus province.
The SAA with the help of its allies in April 19, 2018, started its operation to liberate the southern Damascus from the hands of ISIS terrorists.
Because of the high density of wrecked buildings and the nature of ISIS, operation in this pivot continued with more difficulty and caution.

Therefore the operation of evacuating the militias out of this region happened simultaneous with SAA’s operation against ISIS.

The advances against ISIS in Hajar Al-Aswad & Yarmouk Camp were so “buidling to building”, that the ISIS terrorists were convinced that there is no way but to surrender. Heretofore the ISIS terrorists had rejected all the Syrian governemnt’s suggested compromises .

Eventually, one month after the initiation of the operation in May 21, 2018, with an agreement, the ISIS terrorists managed to leave the southern parts of Damascus completely, hence with the liberation of southern Damascus all of Damascus and “Governorate of the Countryside of Damascus (Rif Dimashq Governorate)”, —after 7 years of different terrorist groups presence— were liberated.

The siege of northern Homs (The al-Rastan pocket) was one of the other important middle parts of Syria, which was under the occupation of different militia groups, most notably Hay’at Tahrir al-Sham “HTS”.

Liberating these regions returns the security to countrysides of Homs, Hama and Salamiyah in one hand, and would open the strategic “Hama-Homs’ road which was closed for years because of the presence of the militants, on the other hand.

Also it would be a source for SAA’s manpower, and they could fight the terrorism in other parts of Syria.

Because of the sensitivity of region, the peace talks failed many times, but ultimately—with massive deployments of SAA’s convoys to Homs, the news of SAA’s Imminent operation and militias fear of this matter— the militias accepted the agreement and left the region.

For more information, look at this article: Reconciliation Agreement in Northern Homs or Military Operation?!

From May 3, 2018, with militias giving up their heavy and medium weapons to SAA, the compromise agreement was executed officially.

Generally, the operation for evacuating the militias from northern Homs, implemented in two stages:
1) The SAA’s forces and the Russia’s military police with their entrance in eastern part of the “al-Rastan pocket” and raising the flag of Syria.

2) The western part of the “Siege of Northern Homs” with the entrance of SAA to every single of villages and raising the Syrian flag in them (as a sign of liberated regions),

and therefore all the northern regions of Homs was cleared completely from the threat of militias.

It needs mentioning that during the evacuation stages, about 35,000 of militias with their families evacuated from the northern Homs, towards north of Syria.