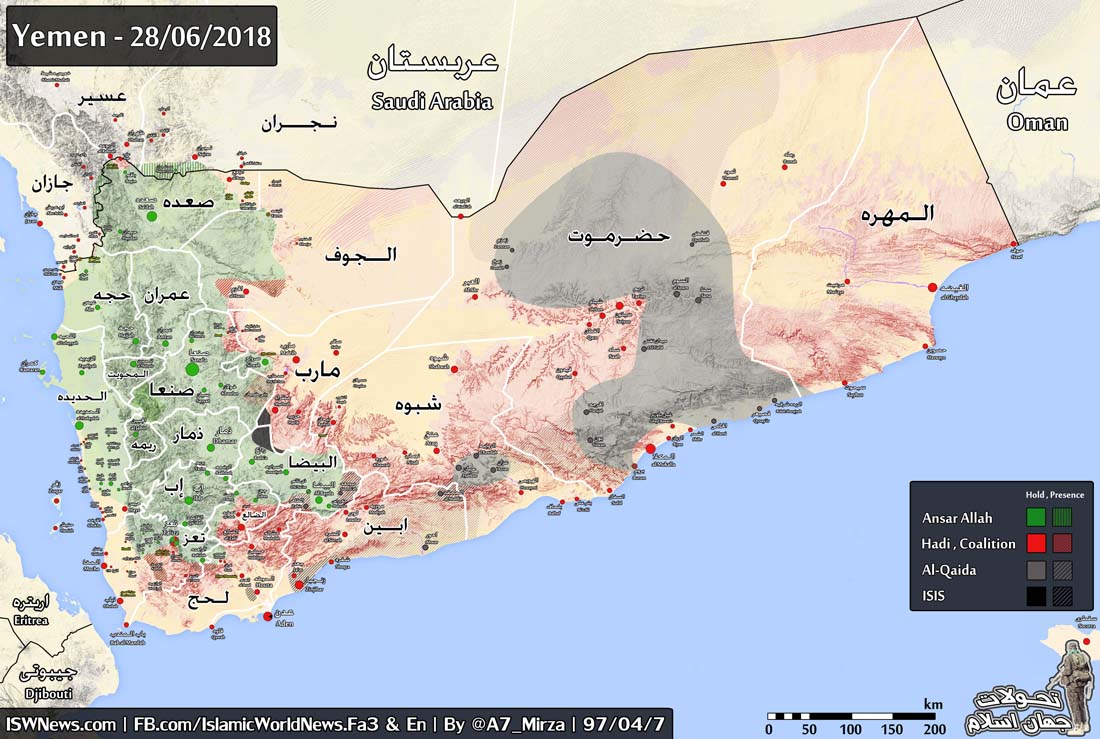 Looking into three main pivot of battle fronts in Yemen, with Map; What will be the fate of the battles?

In the past month three pivot, out of ten pivot, had more change and clashes.
– Northern Al-Hajjah pivot
– Southern Al-Hudaydah pivot
– Al-Bayda pivot

Al-Hajjah pivot:
In Yemen’s northern pivot, the coalition forces —after that Ansarallah left the Saudi Arabia soil and heavy bombardments against villages & border towns, like Khobah— invaded border crossings and cities across the main roads, which resulted the fall of “Midi” port (northern Al-Hajjah) and Al-Nar & Al-Shabaka heights (east side of Tawwal crossing) all the way up to northern Harad, into the hands of coalition. Right now Al-Nar & Al-Shabaka are retaken by Ansarallah, and once again the coalition forces have retreated from eastern Tawwal to Saudi Arabia’s soil, However, Midi is still under control of coalition.

As we mentioned in our previous report, the aim of their operation in west coast of Yemen is to cut Ansarallah’s access to the sea. For achieving this goal, from the beginning of Yemen war, southern Al-Hudaydah have faced heaviest attacks from Saudi-led coalition, with pivotal role of United Arab Emirates.

(According to the latest news & field informations, the situation of southern Al-Hudaydah is explained in this Link: Latest Updates on Al-Hudaydah and Western Coast Fronts; Map)

In this pivot, the attacks by Saudi-led coalition, ISIL and Al-Qaeda are still going on in pivots which were described in previous report.
In Na’man district, Ansarallah retreated from its positions and now Malajim, Nati` and Qaniya are the contact lines between Saudi-led coalition and Ansarallah.
In Rada’a district, the enticed elements of Al-Qaeda & ISIL were killed by Ansarallah in its recent operations, and some of them are captured. ( For more information about this news, go to: Latest Updates on Yemen 25 June 2018; News of Fronts )
In other pivots, there is no report about notable clashes.

And about negotiations and the fate of the war:

The fate of the war in Yemen is dependant on Al-Hudaydah Operation.
Overall it can be said that Saudi-led coalition sword is double edged. The blunt side is the negotiations, and the sharp side is their military operation. So in light of this the negotiations are still going on with the mediation of UN’s Envoy, in one hand, and the military operation in Al-Hudaydah continues, on the other hand.

Previously, Ansarallah’s leader said that they are ready to give UN the control over the payments of government employees & revenues from Al-Hudaydah port, and he also said that if coalition stop its military operation in Al-Hudaydah coasts, they will stop their attacks in sea and secure the sea.

For completing the military victories, Ansarallah needs to achieve a political victory, which they have alot of troubles in the way of getting it.
One of these troubles is the International Consensus that has been created by lots of Saudi and UAE money & mercenary states of the region.
Ansarallah officials need to break this consensus and get themselves out of international limitations. (maybe this solution is the only channel right now that Iranians can help Ansarallah with it)
Ansarallah, in terms of military power, social support, security of cities, etc… is not in a bad position, but in Diplomacy War, sometimes they need the support of countries like Iran and sometimes creating an agreement with other fronts and even an election on a national scale.

Despite the things that are being said, Ansarallah has enough power to defend western coasts, and what led the UAE to Al-Hudaydah airfield is Ansarallah plan to swamp Emirates in order to drain their power.

Monthly Report on Yemen’s developments 29 May 2018; Situation of Fronts + Maps