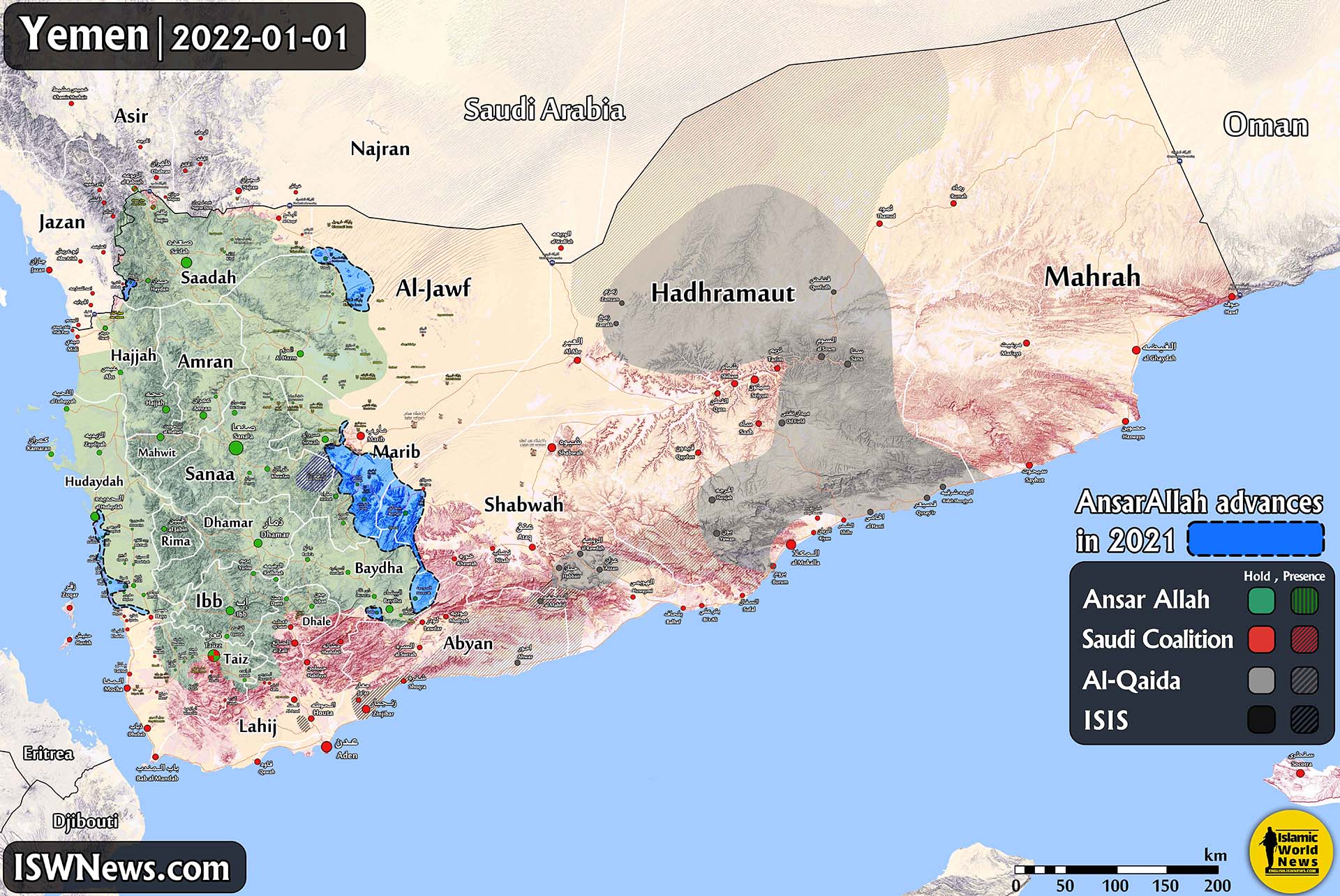 Reviewing the most important military changes that took place on various fronts in Yemen last year.

Saada:
During Ansar Allah operation on late may 2021, on the southwestern front of Saada province in the Malahit region and Jizan province in southern Saudi Arabia, areas with an area of about 150 square kilometers were liberated from the occupation of the Saudi coalition.

Al-Jawf:
During Ansar Allah operation, from December 4 to 23, under the name of “Fajr Al-Sahara“, more than 1,200 square kilometers of occupied lands in al-Jawf province, including the important town of Yatmah, the center of Khab and Shaaf district were liberated from the Saudi-led forces.
In the eastern fronts of al-Jawf, clashes continue in the suburbs of Khanjar camp to the eastern desert of Maraziq and the heights of Alam, and the lines have not been stabilized yet.

Marib:
In Marib province, Ansar Allah still holds its positions on the three main fronts in west of Marib, in Raghwan, Madghal and Sarwah.
On the Raghwan front, there has been no significant change over the past year, and the Asdas tribes continue to follow the Saudi coalition. Ansar Allah also has no intention of advancing in this front.
On the Madghal and Sarwah fronts, Ansar Allah attacks led to the liberation of the Kufil base and the Zena camp.
Currently, clashes on the western fronts of Marib has stopped behind the Marib Dam to al-Atif and al-Khashab heights because of various reasons, such as the Saudi coalition fierce resistance, heavy bombardment of Ansar Allah positions by the Saudi coalition warplanes, etc.
But in the south of Marib province, Ansar Allah has succeeded in liberating the districts of Rahba, Harib, Abdiyah, Jabal Murad (without clashes) and Jubah by carrying out Operation Rabi al-Nasr. This important advance has led Ansar Allah to the southern entrance of the city of Marib, And heavy clashes have been going on since November 2 in the suburbs of the al-Balaq al-Sharqi and al-Balaq al-Awsat heights.

Al-Baydha:
During Operation Fajr al-Hurriya, Ansar Allah succeeded in completely clearing the districts of Nu’man, Nate’, al-Musawara, al-Sawma’ah and Mukayras, covering an area of about 2,500 square kilometers, from the control of the Saudi coalition and the terrorist groups al-Qaeda and ISIS.

Shabwa:
Following the developments in the central fronts of Yemen, Ansar Allah carried out Operation of Nasr al-Mubin in three stages and completed the operation with launching Operation Rabi al-Nasr in the area. In total, the operations led to the liberation of 3200 square kilometers of lands in Shabwa and Marib provinces, including Usaylan, Beyhan and Ain districts in Shabwa province.

Taiz:
On the Taiz front, on January 9, Ansar Allah repelled ISIS insurgency in the Azlat al-Haima area in the north of Taiz province by a security intelligence operation.
Clashes continue on the axis of al-Kadhah and the district of Muqbanah, and the mentioned areas are still under the control of Ansar Allah.

Al-Hudaydah:
On November 12, the Saudi coalition command issued an order to withdraw its forces from the city of Al-Hudaydah and the west coast of Yemen. By this retreat, the National Resistance forces including the forces under the command of Tariq Saleh, Tihamah forces, Amaliqa Brigades and joint forces evacuated the northern and eastern areas of al-Hudaydah city and the western areas of al-Durayhami, al-Jah and al-Tuhayta.
On the other hand, on November 18, Tariq Saleh forces launched an operation called “Golden Arc” in the south of al-Hudaydah province and the west of Taiz province, with the aim of securing the positions of the Saudi coalition on the southern regions of Hudaydah province, which has not achieved significant results so far. Ansar Allah has so far managed to repel most of Tariq Saleh attacks by carrying out Operation Eighth Deterrence Balance and several other missile and drone operations.

Clashes continue on other fronts, such as al-Dhale’ and al-Hajjah provinces, sporadically between the Saudi-led forces and Ansar Allah, and there has been no significant change in the battle lines in these areas.